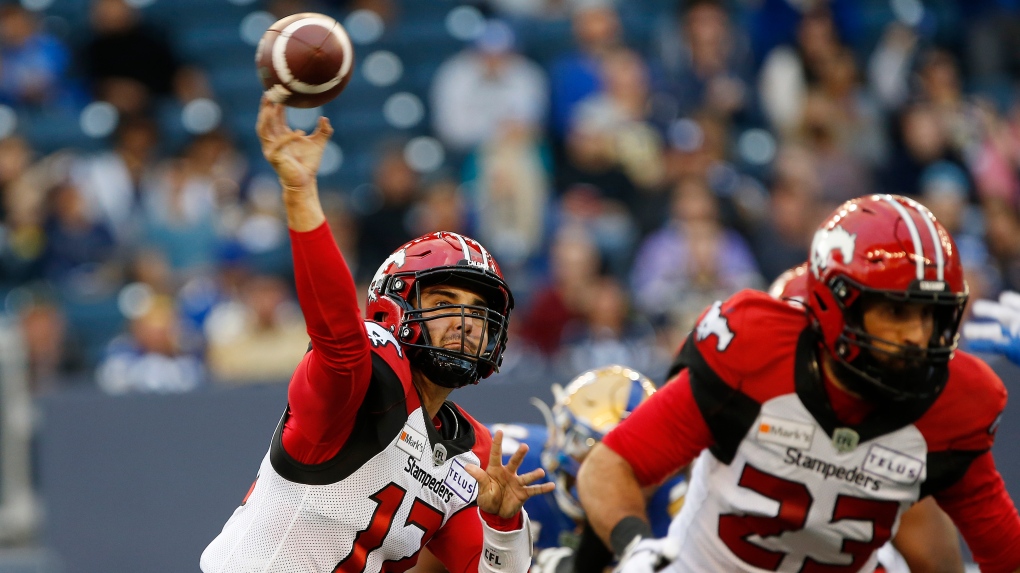 The Calgary Stampeders will have history on their side Monday when they host the Edmonton Elks.

“I don't really worry about whether I've had success one place or not because it's a new team, new year - weird year,” Dickenson said. “It's still football, it's still the Labour Day Classic.

“It'll be an exciting game. Weather is supposed to be excellent, should be a great crowd, just a great environment to go out there and see which team is better.”

Unlike many previous years when Alberta's two CFL clubs were sitting at or near the top of the West Division standings at this point in the season, both find themselves in need of a victory

“We're just trying to focus on the game and we know the challenge that is ahead of us,” said Dickenson, whose team is coming off an 18-16 road loss to the defending Grey Cup-champion Winnipeg Blue Bombers on Aug. 29.

“The motivation is we both play in the West, so we're both on the bottom of the standings right now and we understand that one of us has to climb out of that hole, maybe at the other team's expense. So that's where it's at for me.”

Rookie Jake Maier will make a third straight start at quarterback for Calgary. Veteran Bo Levi Mitchell (fractured tibia) resumed practising this week after coming off the six-game injured list but will be on the one-game list for this contest.

“I'm learning more and more every day how much of a spectacle (the Labour Day Classic) is, not only to us and Edmonton, but just to the community and all the fans and the rich tradition behind it,” Maier said. “I understand the standard that we uphold here in Calgary when it comes to this game and this weekend.

“I'm looking forward to putting my best foot forward and really as a team build on what we did last week.”

Edmonton hasn't played since a 21-16 win over B.C. on Aug. 19. The Elks were scheduled to play in Toronto on Aug. 26 but that game was postponed after the West Division club had COVID-19 issues.

The game with Toronto has since been rescheduled for Nov. 16.

Edmonton resumed practising Wednesday and head coach Jaime Elizondo praised his players for having a solid week of preparation.

“It's like they don't miss a beat,” said Elizondo, who added his players are eager to get back into action against the Stamps. “I think there's a lot of excitement, edge. I think they're so mentally in a good spot right now, all factors considered. They know what it's about.

“At the same time and I'm a big believer in this, it's Game 4 on our schedule. I don't mean to minimize the Labour Day Classic. It's a huge game. It's a great environment, but at the end of the day, it's Game 4 and when Game 4 ends, we'll focus on Game 5.”

That game will be a rematch just five days later at Edmonton's Commonwealth Stadium.

“We want to go out there and get a win and follow it up the next week,” said fullback Calvin McCarty, who will make his Calgary debut Monday. “To win both, you've got to get the first one.

“The plan right now is to get this one and the next plan will to be go get that one as well. At the end of the day, it's an in-province rivalry here in our stadium and we've got to take advantage.”

McCarty spent 13 seasons with Edmonton (2007-19) but came out of retirement to sign with Calgary this season.

“I've been playing football since I was six, seven years old,” McCarty said. “I still love it, man.

“It's my passion. It's in my DNA. To go out and have an opportunity to go through it after this long layoff, I'm excited. I'm hyped.”

Running back/returner Terry Williams will face his former team for the first time since signing with Edmonton in the off-season.

This report by The Canadian Press was first published Sept. 5, 2021

The federal government is planning to unveil its plans for a vaccine passport designed for international travel on Thursday, CTV News has confirmed. Prime Minister Justin Trudeau and Finance Minister Chrystia Freeland are scheduled to speak to reporters at 10 a.m. ET, which CTVNews.ca will carry live.

A report exploring the far-right in Ukraine’s military found that neo-Nazis and supporters of far-right groups in the ranks bragged online about receiving training from Canada and other NATO nations.

U.S. unveils COVID-19 vaccine rollout for children as Canada plans its own

U.S. officials have outlined a plan to roll out two doses of the Pfizer vaccine formulated for children aged 5-11 in the coming weeks — provided that the U.S. Food and Drug Administration approves Pfizer’s safety and efficacy data.

The Western Australian government has offered a 1 million Australian dollar (US$750,000) reward for information that leads to the whereabouts of a 4-year-old girl missing for six days in a remote coastal area.

NEW | Who is the Green Party's rookie MP Mike Morrice?

The Green Party endured some major setbacks this federal election, but among the blunders was one major victory: gaining its first seat in Ontario. Rookie MP Mike Morrice is to credit for that.

Pattie Lovett-Reid: The perfect storm is brewing for cash-strapped Canadians

With inflation soaring, some economists are predicting that interest rate increases won't be far behind. CTV's chief financial commentator Pattie Lovett-Reid looks at what that means for your finances in her latest column on CTVNews.ca.