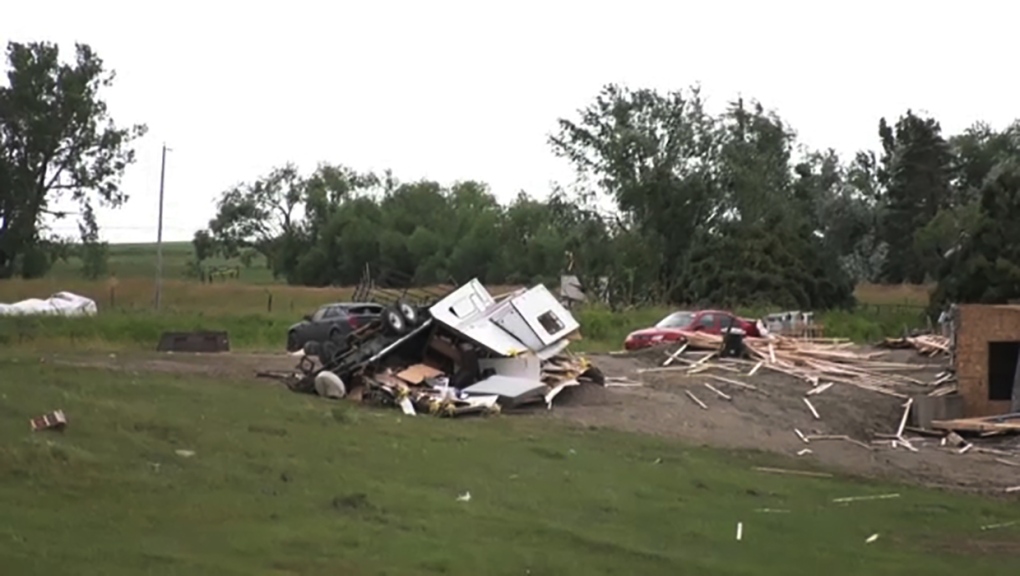 Homes and vehicles in Cypress County were damaged by severe weather on Monday, July 18, 2022.

Environment and Climate Change Canada has confirmed a tornado did indeed touch down in southern Alberta earlier this month.

In a weather summary posted to its website on Sunday, the national weather agency says multiple homes, an RV and grain bins were damaged by the tornado, which hit at around 1:10 p.m. some 10 kilometres southwest of Redcliff.

Environment Canada has given the tornado a preliminary rating of EF-2, though that is subject to change if more information on the weather event becomes available, and said wind speeds are estimated to have hit 190 km/h.

The tornado was followed by a downburst – a strong downward and outward wind system – in and around Redcliff, which downed trees and power lines and damaged structures with 150 km/h winds.

The downburst has been given a preliminary rating of EF-1.

The tornado and downburst happened as a severe thunderstorm moved through Cypress County near Redcliff and Medicine Hat.

Environment Canada is asking anyone with pictures of the damage these two weather events caused to share them by calling 1-800-239-0484, emailing storm@ec.gc.ca or tweeting them with the hashtag #abstorm.

The town of Redcliff is located roughly 275 kilometres southeast of Calgary.