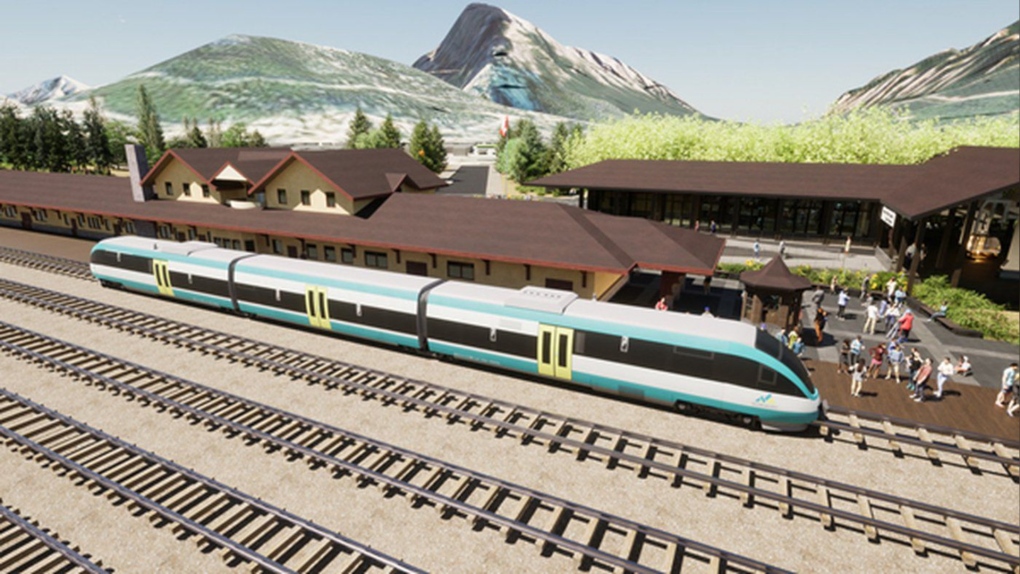 The proposed Calgary Airport to Banff Passenger Rail is shown in this artist's rendering handout image at the Banff Train Station. The company behind a proposed passenger rail service that would connect Banff to the Calgary International Airport says the project will cost $1.5 billion. (THE CANADIAN PRESS/HO-Liricon Capital)
CALGARY -

Conservation advocates and experts are concerned a proposal for a Calgary-to-Banff passenger train is chugging along without addressing some key environmental issues in and around the national park.

Liricon Capital Inc., the lead private-sector proponent, is touting it as a hydrogen-powered transportation solution with lower greenhouse gas emissions than driving.

The company says it has received support from municipalities and the tourism industry, but the Alberta government has told the Globe and Mail it won't invest in the $1.5-billion train as it stands because the financial risks are too high.

Environmental organizations — including Canadian Parks and Wilderness Society, Yellowstone to Yukon and Bow Valley Naturalists — and some scientists say the proposal also has environmental risks.

"This is one of the most important conservation landscapes in North America," Tony Clevenger, a senior wildlife research scientist with the Western Transportation Institute at Montana State University, said from Banff, Alta. "It also happens to be one of the busiest in terms of transportation infrastructure.

"The thought of this new rail line, which would be really close to the existing rail line, is really troublesome — not just in the park, but outside the park on provincial lands and Stoney Nakoda (First Nations) as well."

Concerns include wildlife deaths along the rail line — particularly grizzly bears, which have been hit and killed on the existing track — and the fragmentation of wildlife habitat in Alberta's already busy Bow Valley.

"We see it as a means to potentially provide a sustainable transportation vision that could work for wildlife, people and the planet," he said.

But, he added, there's not enough information or collaboration to know whether it works for wildlife.

"The Bow Valley is already being squeezed by development."

A recent report by the Canmore, Alta.-based organization found the mountain town's footprint has grown five times in 50 years. It focused on grizzly bears because "if you take care of grizzlies, you take care of a lot of other things."

The report found bears have lost about 85 per cent of their original habitat in the Bow Valley.

"So, when you talk about another piece of linear infrastructure, which a train line is … we are talking about cutting up the habitat, disconnecting wildlife," he said.

"We don't think there has been adequate assessment of how wildlife will be impacted," she said.

She also questions whether a train would actually reduce cars on the highway, saying bus service may be more cost-effective.

Parks Canada said in a statement that its first priority is to protect the ecological integrity in national parks, but it's "not currently reviewing a proposal for passenger rail in Banff National Park." Any review, it added, would look at policy and legislation, including the Impact Assessment Act and park priorities.

"The fact that the passenger train will be a zero-emission hydrogen train and significantly reduce vehicle traffic … means human and wildlife mortality on the highways will be dramatically reduced," she said. "The specifics of the hydrogen solution and wildlife mitigations will be determined through consultation."

The company has said it's considering using technology such as lighting or sound to warn animals about approaching trains and reduce wildlife deaths on the tracks.

Colleen Cassady St. Clair, a biologist with the University of Alberta, said she spoke to Liricon about that idea, which came out of some research she led.

Although early tests show it can be effective for some wildlife, she said "there's a lot of untested terrain in a warning-based system."

St. Clair said there could also be challenges with wildlife crossing structures that go over or under the tracks.

Clevenger, who specializes in wildlife crossings, said he's heard the company was looking at underpasses to align with those under the Trans-Canada Highway in Banff National Park.

A passenger train, he added, could end up increasing overall traffic to the national park.

"It's a landscape that is just overflowing with people," he said. "I don't think they can manage it."

This report by The Canadian Press was first published Aug. 15, 2022