The federal government announced the timeline for its long-touted single use plastics ban Monday, giving businesses clear targets for replacing some products.

The ban will halt the manufacture or importation of plastic bags or single use takeout containers, with an end to all forms of their trade by the end of 2025.

Calgary based start up Earthware said there are 60,000 take out orders every day in the city, making up roughly 240,000 single use containers. Since November the company has signed up restaurants and clients to request their reusable containers.

The company then either collects them or retrieves community collection bins and rehashes the containers up to 1,000 times.

"A hundred and fifty million containers are still going to get used whether its plastic or some other thing, so our job is to actually reduce the amount of containers being used," said Earthware founder John MacInnes.

He said the ban has helped drive business.

"We're having monthly growth of about 285 per cent," MacInnes said, saying they have attracted hundreds of members with the list of participating restaurants, hotels and grocery stores building every day. 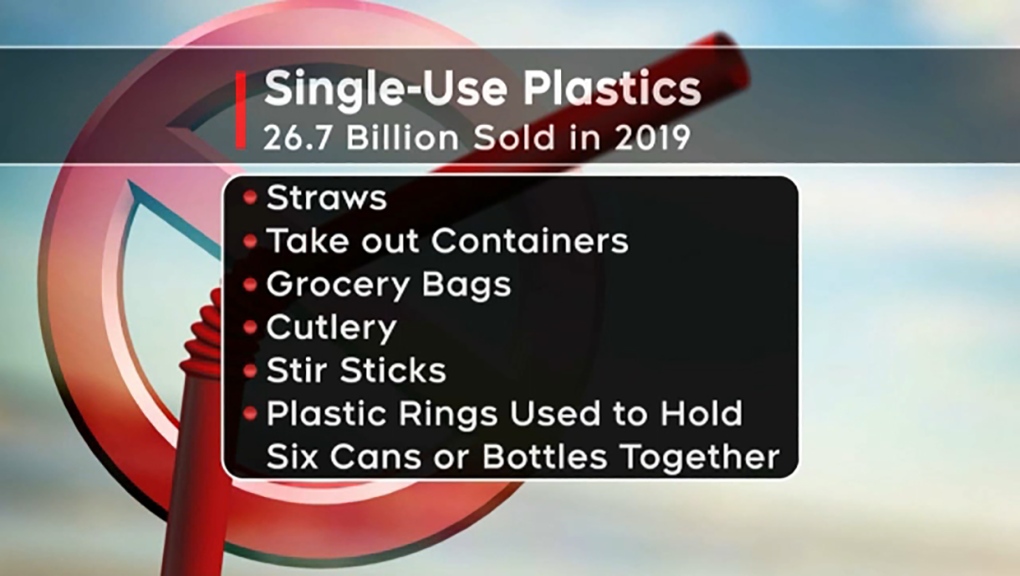 The ban will halt the manufacture or importation of plastic bags or single use take out containers, with an end to all forms of their trade by the end of 2025.

That reduces the amount of potential plastic waste, but a group of students from Crescent Heights High School have also spotted a potential recycling opportunity.

A group project polled students on their most significant personal struggle - 60 per cent answered some combination of sleep and anxiety.

So the team of grade 10 students began exploring using recycled plastic pellets instead of glass or metal beads to weighted sleeping blankets.

"A good amount of plastics a can be reused," said Gavin Bate, one of three students behind the project. "We're doing something a bit simpler, where we just chop it up, melt it down to get it a bit more dense and then you can use it as useful mass."

The idea was submitted to GreenLearning ECO 360 challenge, winning $1,000 which the students say they plan on re-investing in the idea.

The federal government said 3.3 million tonnes of plastic is thrown away by Canadians every year. Environment minister Steven Guilbeault said traces of chemical compounds from plastics are detectable in soil, water, air and food samples.