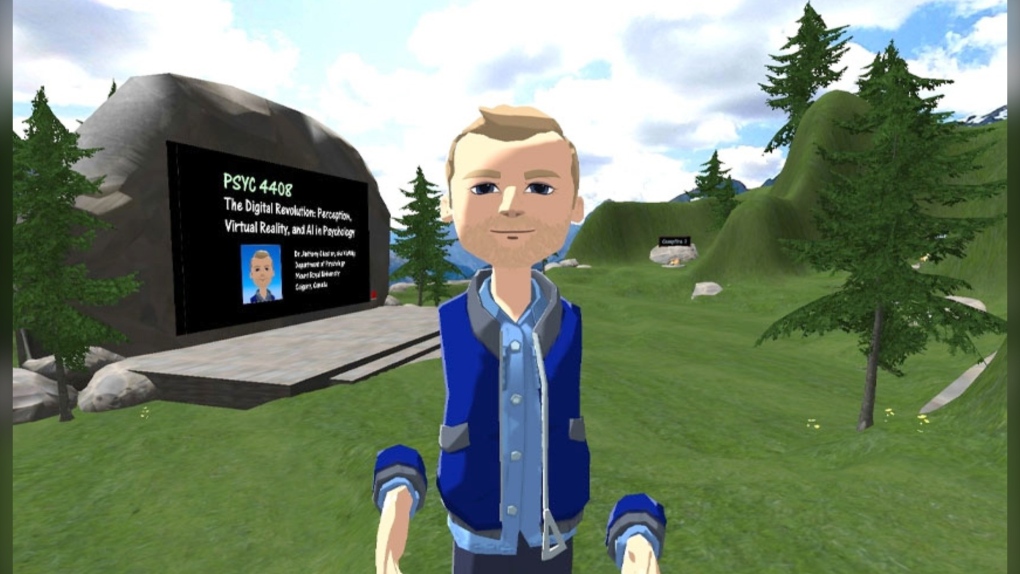 With many students nervous about a return to in-person classes amid a surge in COVID-19 cases during the fourth wave, one course at Mount Royal University is offering a different way of learning among peers – virtual reality.

Created by Dr. Tony Chaston, the fourth-year psychology course, called The Digital Frontier: Perception, AI and Virtual Learning, is the first of its kind in Canada and takes place in virtual reality.

A total of 20 students began the course on Sept. 14, with spots filling in a matter of days.

“This is a psychology course, so a lot of it is going to be about our interface with AI," said Chaston. "Most people don’t even know that they use AI all day every day. Google, Facebook or any social media, it all involves AI.”

Chaston’s background involves visual perception in humans — how the eyes take in light and how we perceive scenes and make sense out of them; then how we use that knowledge to get somewhere.

He’s combined those with his interest in the outdoors, wilderness and navigation during hiking.

“It progressed to VR mostly because I was looking for other ways to simulate outdoor experiences in the lab and VR obviously jumped out when that started to happen," he said.

The course allows students to be present and immersed in social interaction.

“Immersion in media is a topic that’s been around for a long time, but it takes on a whole different level when you talk about it in VR,” said Chaston.

After diving deep into what VR is and how it works, the course will focus on Chaston’s research into using VR nature scenes to lower stress levels.

The class is set up as a three-hour block and students have already began interacting in the VR world, learning basic behaviour etiquette.

"While most class time will be in VR, there will be time for group work that uses other more traditional online formats like Google Meet so that students aren’t wearing headsets for three hours straight," read a release. "As note-taking is tough in VR, those will be provided separately."

Chaston was assisted in building the course by Anna Nuhn, who has since left MRU, along with Erik Christiansen from the Riddell Library and Learning Centre, and fellow psychology professor, Dr. Evelyn Field.

VR is something Christiansen calls a natural progression from traditional online learning while providing a more social experience.

“Thanks to photogrammetry, we have the ability to render real-world environments as high-definition 3D worlds. Students can take virtual field trips to dangerous mountain peaks, volcanoes, fragile archeological sites, or Mars," he said.

"Creating these environments takes some work, but it is less laborious today; in the future, educators will have access to better creation tools and pre-built experiences for students. VR has the potential to take learning to new heights — in ways that face-to-face and traditional online education couldn't."

Fifth-year psychology student Ash Dembicki, who is working on her honours thesis in virtual reality nature therapy, says she’s hoping to learn about the use of VR in therapy and counselling.

“I plan on working in trauma-based counselling, and using VR as one of the tools to help suffering individuals heal and move on to a healthy state," she said.

Chaston built the course using AltSpaceVR, a large VR platform that allows for flexibility and the use of a large range of headsets.

“We’re not just teaching a new course. We’re teaching a new course on a new platform and we realized quite early on that the implications for that go beyond just my course," he said. "It sets a precedent for how this will be done at the University. We didn’t want to just rush into it."

Each learning spaceis builton a Rocky Mountain theme, with a panoramic 360-degree view of the mountains as a background, which Chaston says works better than travelling to the actual mountains to teach a class.

“I tried that in real life. It’s not very practical," he said.

"The grass is wet, the students have all these books and computers and stuff with them. It’s hard for them to get up and move somewhere. There’s nowhere for them to plug in. It doesn’t actually work. In VR? It works great.”