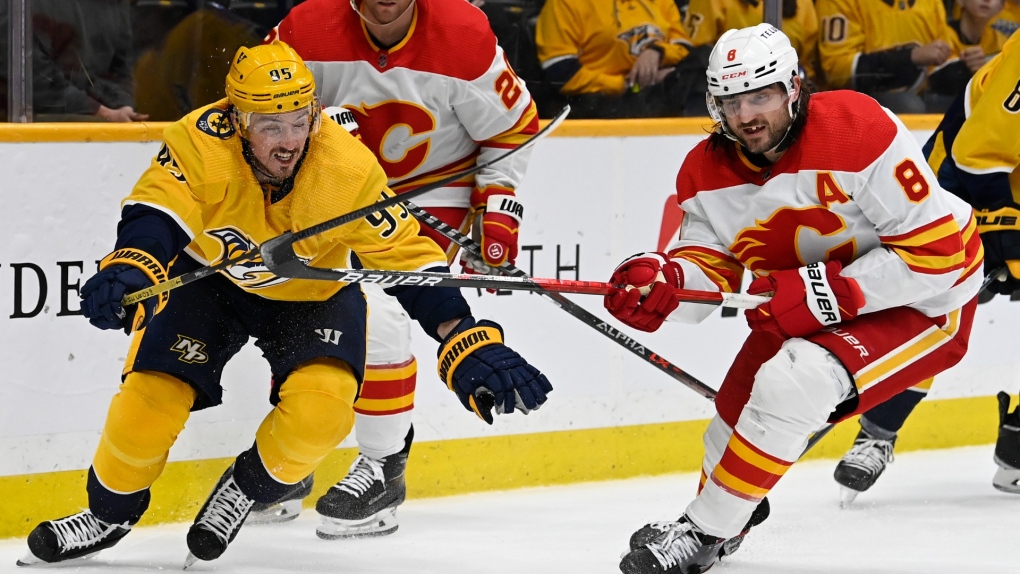 The Calgary Flames are expecting to be without defensive stalwart Chris Tanev for at least the next two games but head coach Darryl Sutter says there will be opportunities for other blueliners to step up.

The 33-year-old suffered an undisclosed 'upper body injury' in the Flames' overtime win over the Columbus Blue Jackets Monday night at the Scotiabank Saddledome.

"Tanny will miss two games and, if everything goes well, we'll get him back after the break. So if there's any blessing in having a long break, that's it," said Sutter on Wednesday. "Thankfully, with that surgery he had last summer, major surgery, it wasn't that."

The Flames will host the Blackhawks Thursday night before travelling to Seattle for a Friday night game against the Kraken. The team will then have 10 days off before they face the Rangers in New York on Feb. 6.

Sutter says Tanev's injury leaves a void in the team's defensive pairings, but other defensemen will be called upon including Connor Mackey.

"It changes dramatically when you look at it," said Sutter. "Nobody replaces Chris Tanev but I think your defense with guys like Connor coming in and Stoney (Michael Stone) playing a few more minutes in there, but then 'Z' (Nikita Zadorov) goes up a notch, right, and Mackenzie goes back to the right side.

"The only pairing that doesn't get affected is Noah (Hanifin) and Rass (Rasmus Andersson), so they have to continue to be really good players, but then the next four have to take that little bump in their game in terms of some of what Chris does."

Tanev's absence will be felt off the ice as well.

"It's not just the blue line, it's your locker room," said Sutter of Tanev. "Every coach has a handful of players like that where you know you don't have to say nothing or don't have to react, those guys take care of it."

Sutter expects Mackey to make the most of his ice time.

"He's been chomping at the bit. I met with him, I think it was in Chicago, about where he is and that's what happens to lots of defensemen. But we've been getting him to work on both sides to see if that would get him another opportunity, which he hasn't played both sides. Just things like that because you've got to stay ready," said Sutter.

"Connor went four years of school and then two years (in the AHL). It's still, in a lot of ways, it's still a little bit of an apprenticeship."

Taneve has played in 40 games this season, notching one goal and seven assists.