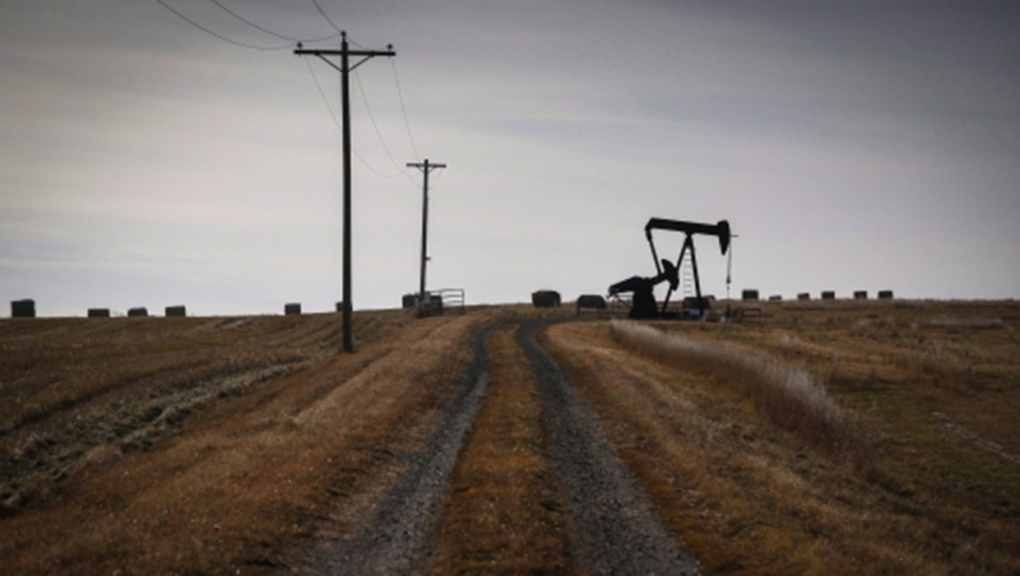 A pumpjack works at a well head on an oil and gas installation near Cremona, Alta., on October 29, 2016. A group of Alberta landowners is asking farmers and ranchers to fight back against unpaid debts and unreclaimed oil and gas wells by closing valves and cutting power to energy company sites. THE CANADIAN PRESS/Jeff McIntosh

CALGARY -- A group of Alberta landowners is asking farmers and ranchers to fight back against unpaid debts and unreclaimed oil and gas wells by closing valves and cutting power to energy company sites.

"The landowners need to safely shut down those surface leases, whether it's safely turning off the power or safely shutting off the valve," Daryl Bennett of the Action Surface Rights Association said Thursday.

The association represents about 200 landowners in southern Alberta.

"They need to let these companies know that they've defaulted on the leases and there are consequences."

An organization that represents the industry advised against the move and called it a "blatant disregard for public safety."

"Shutting in wells without the proper care and guidance of oil and natural gas operators poses significant safety concerns for the individuals involved and the public," Brad Herald, vice-president of operations for the Canadian Association of Petroleum Producers, said in an email.

Most of Alberta's roughly 400,000 wells are on private property. Provincial law forbids owners to deny access to energy companies and the industry is required to pay compensation. The deals are regulated by the Alberta Surface Rights Board.

But the arrangement may be coming apart.

Rural municipalities recently revealed energy companies owe a total of $173 million in unpaid property taxes and many landowners feel they're getting the same short end of the stick.

Bennett said oil and gas operators are increasingly reneging on lease agreements that compensate landowners for the presence of wells or other facilities on their property.

"I get calls every day from landowners saying, 'Hey, I got a notice. They're cutting the compensation.' There's thousands of landowners in this situation."

The cuts often come from companies with producing wells.

"It seems like this (United Conservative) government is in industry's back pocket and they'll do whatever they need to do to ensure these companies are allowed to drill," Bennett said. "There's a huge rural backlash coming and it does not appear that the government recognizes this."

The association says the Surface Rights Board has been cutting payments to landowners by as much as half.

The landowners group lists problems that include slow action on complaints to poor regulation of well cleanup. It says industry has been exploiting backlogs at the board to ensure problems aren't dealt with for years.

A government draft report, released to The Narwhal magazine under freedom-of-information legislation, looked at 18 well sites that had received reclamation certificates. Only one met all the guidelines.

Industry has said low oil prices and falling profits in Alberta's conventional oilpatch mean companies have to cut costs to keep the lights on and employees on the payroll.

"They should have had the foresight to plan. We've warned them for decades that this problem was going to happen."

He said the government should require a performance bond from companies before they're allowed to drill. He also suggests annual compensation has to be paid and wells have to be reclaimed in a timely manner.

So, after a board meeting Thursday, the association asked landowners who are feeling short-changed to take direct action.

"Turn off the power and shut off the valves ... just like any landlord would change the locks for a tenant who does not pay."

It also urges landowners to object to any new drilling activity and to use new legal provisions to force industry to ensure all its equipment is free of weeds and disease.

"(Premier Jason Kenney) says that Alberta has the most socially and environmentally responsibly produced oil," said association member Ron Huvenaars in a release.

"The premier can't say that anymore."

This report by The Canadian Press was first published Jan. 24, 2020