Hundreds gather on U of C campus to protest service cuts, tuition hikes 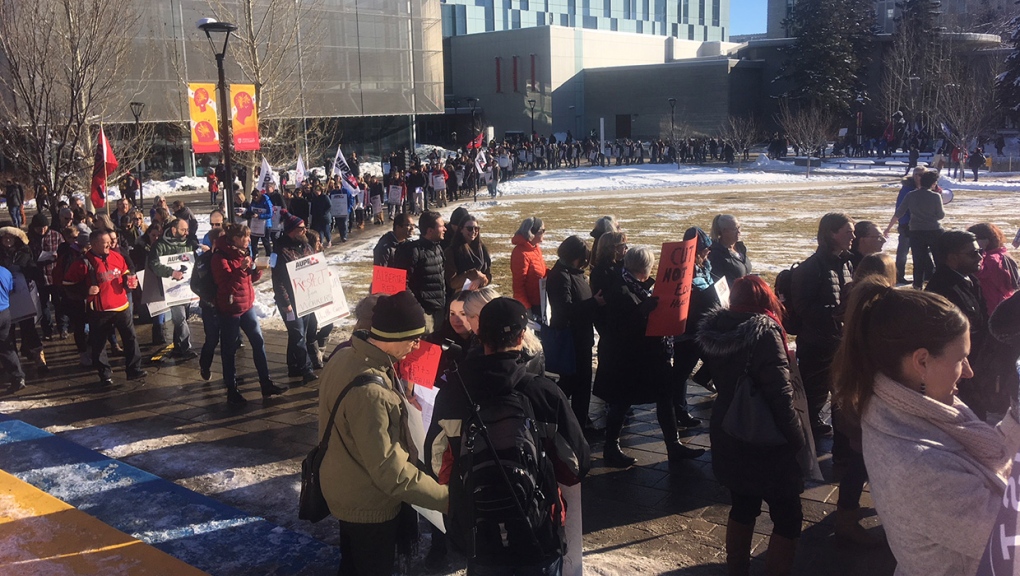 University supporters, including students and staff, at the 'Fight the Cuts' rally on the University of Calgary campus

CALGARY – An estimated crowd of more than a thousand people congregated on the University of Calgary campus Thursday afternoon to voice their concerns with the lifting of a tuition freeze and recent funding cuts.

The 'Fight The Cuts' information picket, hosted by the Alberta Union of Public Employees (AUPE), took place during the noon hour on the Taylor Quad.

The rally followed Monday's announcement that 250 jobs at the University of Calgary would be eliminated, a move prompted by the province's decision to reduce grants and cut funding for the university's infrastructure maintenance program. The budget cuts amount to more than $54 million.

"We were shocked to learn that 100 AUPE members, who work frontline services here at the university, are losing their positions," said Guy Smith, AUPE president. "That's going to impact the way education is delivered here and the services that students require to make their education the best it can be."

"When you're trying to rebuild an economy, the best way to do that is to have an educated and well-skilled workforce. If you take away the ability of Albertans to become educated then that's going to hurt the economy even more."

Joe Ceci, NDP MLA for Calgary-Buffalo, was encouraged by the turnout.

"I am just astounded at the thousands of people who are out here showing their disgust and disappointment and disagreement with the Kenney UCP government and their vicious cuts to post-secondary education," said Ceci. "There's a $4.7 billion corporate, no-jobs handout that they've given to the wealthiest corporations in our province. To pay for that, universities are getting cut all across Alberta."