'I like selling to the world': Siksika First Nation business finds success online

CALGARY -- The owners of Boy Chief Trading Post on the Siksika First Nation have seen business boom despite, or perhaps even because of, the pandemic.

The trading post, located along Highway 901 about 55 kilometres east of Calgary, sells Indigenous arts and crafts, many created by local artists.

Until the spring of 2020, those blankets were only available in the trading post, but when COVID-19 forced the temporary closure of the store the owners took business online. Business exploded.

“We've learned really quick that we had to do things a different way," said Royal. "We started going live on Facebook. Now we are shipping stuff to Newfoundland, Moose Factory Ontario. We shipped stuff to Florida just yesterday. We're shipping to Europe.  I like selling to the world.

McDonald added he was surprised by the quick success.

“The whole COVID thing is a blessing in disguise because it’s brought our product all over the world," he said. "We’ve been shipping on average about 30 to 40 boxes a day.”

The Trading Post’s best-selling and signature blanket is one telling the story of Boy Chief, the Blackfoot warrior turned businessman, after whom the trading post is named.

Celebrities like Jordin Tootoo — the first Inuk player in the NHL — and Black Eyed Peas rapper Taboo are owners of the blanket.

It features three bison images, each representing one of the three men who went south to make the purchase. Each bison has four dots representing the two breeding pairs they brought back to Canada. The rest of the blanket is adorned with Boy Chiefs teepee markings, and is designed using his family’s traditional colours. 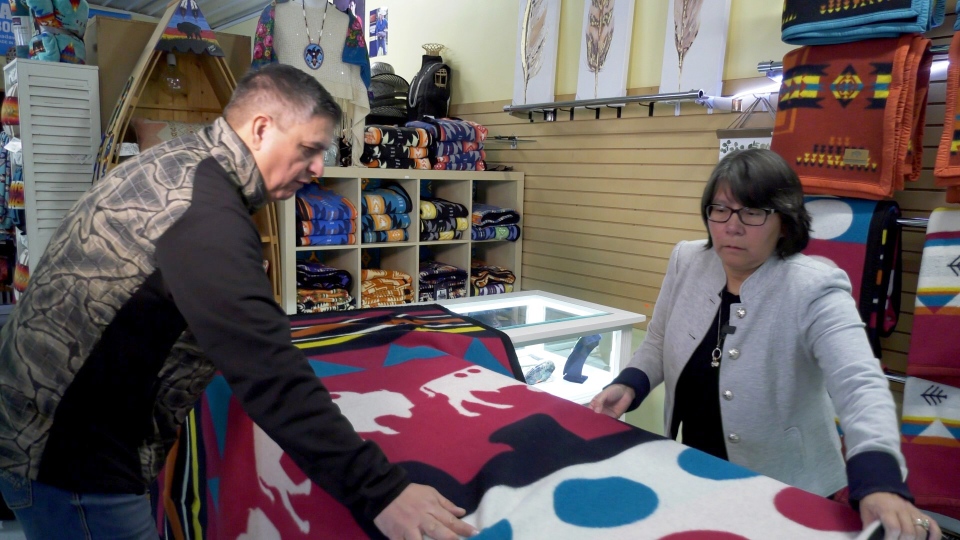 “What we're trying to do is restore our stories. And we want everybody to have a clear knowledge of them," he said.

"We want people to say, ’I bought a Boy Chief blanket.’ When they open up their box, there's a story, a picture. This is a real, and I hope they'll say, ‘this is a real story.' This is history. You’re not just buying a blanket, but a piece of the family story of Boy Chief.

Royal recounts her family’s oral history of her great-grandfather’s journey;

“In his younger days, there were three men who noticed there was beginning to be an extinction of the Buffalo. It was getting very rare, seldom seeing the buffalo, almost to a point where they just couldn't find them anymore," she said.

“So they took it upon themselves to go into the U.S., to the Flathead Indian Reserve, near the Missouri River, and buy two males and two females and they brought them across into Alberta.

"(Boy Chief) sold the two pair of bison to breeders in northern Alberta in hopes of rebuilding the bison herd in western Canada.

"That's when the herd increased again, because they had fresh buffalo coming in from the States.  They managed to save the Buffalo. That's the woodland buffalo up north that's there now."

The fact people around the world are now scrambling to buy the blanket and learn the story of Boy Chief is putting money in the coffers of the eponymous Trading Post, but more importantly, say the owners, it’s spreading knowledge of Blackfoot culture globally.

“That's why we designed that blanket. And there's a whole story with that blanket. So we're not just designing blankets," said Royal “Every single blanket we design, the world will get a story to it. So there's significance to it.”

The Boy Chief Trading Post is now in the process of recruiting even more artists from across Treaty Seven nations in hopes that by showcasing their artwork, they’ll be able to tell even more first nations stories from across Canada to people around the world.

"Because, we know a lot about the world from Canada's perspective. People (around the world) need to know about Canada too, and all the people in Canada," said Royal. “Really, truly, our culture is so beautiful and people really need to know what the stories are.”