'It's unbelievable': Calgary trucker in shock after $80,000 worth of lumber stolen

CALGARY -- Jose Gutierrez has been a long-haul truck driver for the past three decades, but never in his life has he experienced a more devastating feeling at his day job.

“Not even when I was living in Mexico did we see these kinds of robberies.”

Gutierrez parked two trailers full of lumber at the Flying J truck stop near Barlow Trail on Thursday May 13.

He locked them up and safely stored his load like he had been doing for years, only to find out on Sunday that his entire shipment and both trailers had been stolen.

Gutierrez reported the trailers and lumber as stolen to police, who are conducting a full investigation. Police say they have already noticed a drastic uptick in lumber thefts this year. 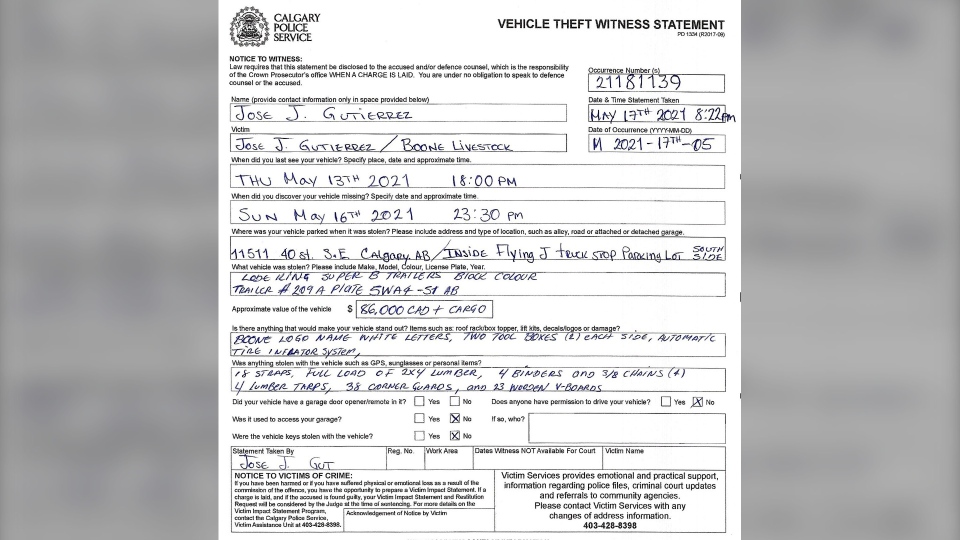 Several incidents have been reported to officers at construction sites and truck stops.

In a statement from Sgt. Nick Wilsher with the CPS Crime Prevention Unit, he stated that the police are aware of an increase in lumber theft activity most notably in the north-central and deep south and southeast areas of the city where new construction activity is high.

“The cost of lumber is increasing as is the price of other construction materials due to supply issues related to the impacts of COVID-19,” Wilsher said.

“We are working with the construction industry to address these thefts and determine when investigative steps can be taken.”

Meanwhile, other truckers like Amrit Grewal who arrived in Calgary from Surrey, B.C. on Saturday morning suggest thefts are ongoing issues across Western Canada.

“It’s happening a lot and my fellow friends are also experiencing this when we go from B.C. to Alberta.,” Grewal said. “Some people just open our trailers doors, break the seals and then steal our stuff.

“People are facing lots of problems because of the pandemic, people are losing jobs, that’s why they need more money right?”

Grewal adds that there is not much truckers can do aside parking in safe truck stop areas with surveillance, but when that’s not an option, it can be challenging.

“We can either sleep and get the rest we need or keep an eye on our load, there’s nothing much else we can do to prevent people from stealing.”

Liz Kovach with the Western Retail Lumber Association says the industry is experiencing unprecedented times due to the COVID-19 pandemic.

She says many retailers and contractors are concerned about safely storing material on their yard and several practices are in place to help mitigate that risk.

“Some of it includes, increasing physical barriers, increasing surveillance cameras, ensuring there is additional security that’s coming by and of course trying to block things as much as possible,” Kovach said.

Kovach adds that neighbours should also keep an eye out for thieves and report suspicious activity to police if projects are being completed in residential areas.

The biggest issue however lies in the price, which will likely remain high according to Kovach, at least until supply catches up with demand.

“These thefts are an unfortunate reality that we’re dealing with right now, but hopefully it’s something people will reconsider because it’s impacting other projects and the ability for employers to finish completing some of their jobs.”