'It's unsettling:' Ranchers and feedlots worried about future impact of COVID-19 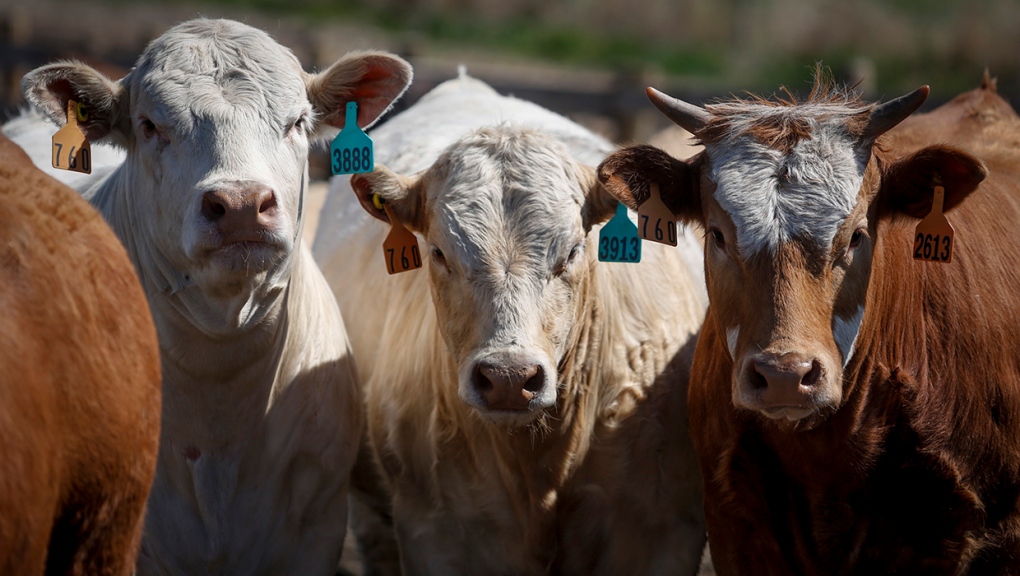 Cattle look out from a pen at the Thorlakson Feedyards near Airdrie, Alta., Thursday, May 28, 2020, amid a worldwide COVID-19 pandemic. (THE CANADIAN PRESS/Jeff McIntosh)

CREMONA, ALTA. -- A cacophony of bellowing cattle makes it hard to hear the other hoof drop, but rancher Bruce Bird knows that it's coming.

Bird runs a cow-calf operation and had to shout to be heard during annual branding last week on his ranch near Cremona, 80 kilometres northwest of Calgary.

Over a hundred calves were run through a chute and locked onto a table to have ear tags applied and a mark seared onto their sides.

The COVID-19 pandemic hasn't had a serious effect on Bird yet, but he's anticipating it will be tougher when the calves are sold in the fall.

"Absolutely, we're going to get hit eventually," he said. "There's usually a big ripple effect prolonged. It's a long, long gradual time until it can rectify itself."

"There's some marketing issues, some commodity issues ... that are really slow to hit us. But when it hits us, it hits us extra hard."

A concern for Bird and neighbour Chelsey Reid, who farms with her husband, Scott, is a backlog of beef at feedlots.

The Cargill plant in High River, Alta., shut down for two weeks due to a COVID-19 outbreak there and is now operating at about 60 per cent capacity. The JBS plant in Brooks, Alta., reduced its operations to just one shift a day until recently. The two meat-packers process 70 per cent of Canada's beef.

"There's always what we call the fall run. That's when there's always a lot of beef on the market, but we always have the capacity for it, so it's not that big of a problem," Reid said.

"If people aren't able to sell their calves this fall, that's going to be a real problem."

Reid said the uncertainty is the most unsettling part.

"Our farms are just sort of carrying on as they always have. Anything that's going to be negative ... is going to be happening come this fall and probably in 2021," she said.

"A lot of us young farmers have a lot of payments that we're tied into, so it definitely is worrisome. It's a lot of money that we definitely rely on."

Tom Thorlakson said there are animals at his family's feedlot near Airdrie that were supposed to have been shipped to meat plants in mid-April.

"We have cattle that we wish were gone. We're not buying anything," said Thorlakson, vice-president of Thorlakson Feedyards.

There are 14,000 cattle at the feedlot and feed costs are running to about $1 million a month, he said.

"When are we ever going to know when the plants will be up to full capacity? It will be the ever-going threat we're living with right now."

Thorlakson said he's heard the cattle backlog could exist until December. And although his family feedlot will be OK, it won't be the same for others.

"It pushes it back to the rancher right? If a lot of the guys are not buying, the guys selling their calves will be getting a lot less money for them because there'll be less demand," he said.

"There's going to be a lot of guys in hardship."

This report by The Canadian Press was first published June 1, 2020