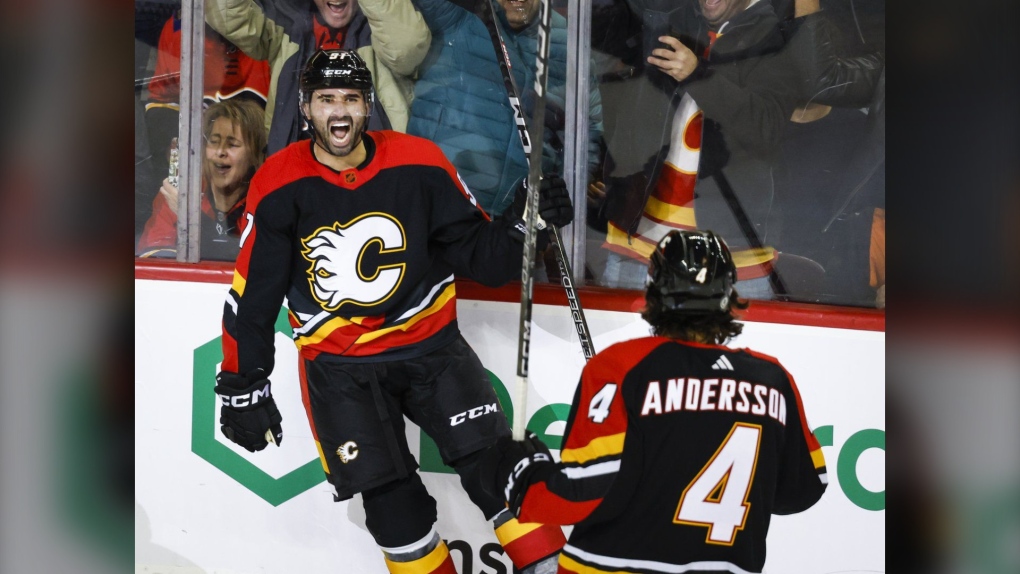 Kadri scored the game-winning goal at 15:42 of the third period and added two assists to lead the Flames to a 3-2 victory over the Arizona Coyotes. Kadri's power-play marker snapped an eight-game goalless streak, in which he had only recorded one assist.

"I've had a lot of great opportunities over the last handful of games so it's nice to finally see it hit the back of the net," he said.

The 32-year-old centre had a strong start to the campaign, recording eight goals and 13 points through the first 16 games.

"There was a little frustration starting to seep in," Kadri added. "It's funny how this game works, sometimes you feel like you're playing great, but no results to show for it and sometimes it can be flipped."

Calgary's power play entered the night in a similar slump, with just two goals in 21 opportunities across its last seven games.

Elias Lindholm netted the first power-play goal at 17:01 of the opening period in the Flames' first man advantage of the contest.

"In this league, it's tough to win and if you don't have a good power play, it's even tougher," Lindholm said. "Tonight, I thought our power play won us the game."

In the penalty box for the winning goal was Coyotes' Jeff Chychrun, who got his stick caught between the legs of Flames centre Adam Ruzicka. Chychrun's penalty came less than 10 minutes after he had scored the game-tying goal.

"We battled back and got ourselves to tie the game up. That penalty's just … I don't know. I have no intention of tripping that guy obviously,” said the Coyotes defenceman. “I'm playing a one-on-one and breaking the play up and try to go up the ice and beat him up the ice and he just falls. I think it's just terrible but it's unfortunate. It cost us a point at least."

Dillon Dube also scored for Calgary (12-10-3), which has won consecutive games. Jonathan Huberdeau chipped in a pair of assists while Dan Vladar, who started for the fifth time in the last seven games, made 18 stops.

"It's huge," said Lindholm. "To take the next step and climb into a playoff spot, we've got to put a couple (wins) together, we can't just be around .500 all the time and lose one, win one, lose one, and go that way."

Arizona finished 0-for-2 on the man advantage with both power plays coming inside the first five minutes of the game.

"We had a strong start of the game. We had two power plays get some momentum there. We had a few good scoring chances," said Coyotes coach Andre Tourigny. "We didn't finish the period very strong. They took advantage of their power play, took a 2-0 lead, which can be a really tough mission against Calgary."

Arizona outshot the home side 7-1 by the 13-minute mark of the first period before Calgary started to tilt the ice in its favour.

After an extended stretch of pressure in the Coyotes' end, Dube opened the scoring deflecting a Chris Tanev point shot at 14:13 of the frame for his fifth goal of the season and fourth goal in his last eight games.

Just under three minutes later, Lindholm scored his ninth of the campaign to make it 2-0.

Coyotes defenceman Juuso Valimaki, selected 16th overall in the 2017 draft, is the fourth Flames first-round pick to play against Calgary during its homestand. He follows Matthew Tkachuk (2016) and Sam Bennett (2014) with Florida on Tuesday and Sean Monahan (2013) with the Canadiens on Thursday.

Maccelli's assist extends the 22-year-old's point streak to four games (one goal, five assists). It's also his 15th helper on the season, which leads all rookies. Maccelli is second in rookie scoring behind Seattle's Matty Beniers.

Coyotes: Having not played at home since Nov. 3, Arizona's stretch of 14 straight games on the road concludes on Wednesday in Edmonton.

Flames: Wrap up their five-game homestand on Wednesday against Minnesota.

Ottawa tight-lipped on details as Canada, U.S. call out China over balloon