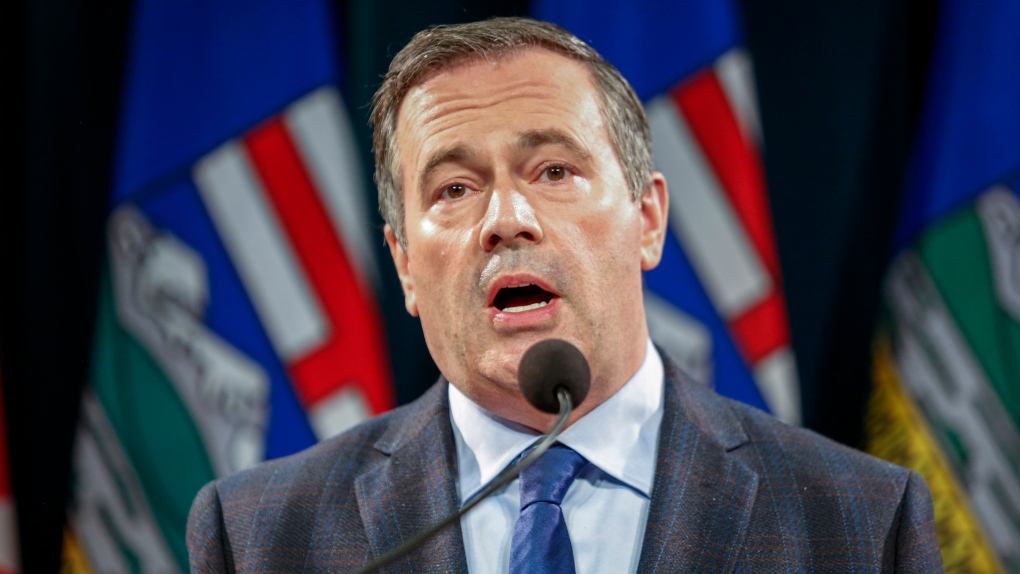 Some opponents of Jason Kenney say he should resign along with federal Conservative leader Erin O'Toole. (File)

Now that Erin O'Toole is officially out as leader of the Conservative Party of Canada, some Alberta MLAs say the development should send a message to Premier Jason Kenney and the UCP caucus.

Drew Barnes, the independent MLA for Cypress Hills-Medicine Hat, and Todd Loewen, the representative for Central Peace-Notley, sent out a joint statement in response to the the departure of O'Toole as leader of the federal Conservatives.

In it, they said the result was the effect that elected officials can have "when they stand up for their constituents."

They also accused O'Toole of lying, ignoring advice and breaking promises to members.

"He chose to put the advice of lobbyists and armchair strategists ahead of his own party's membership, and in the ensuing election, he managed to lose seats," Loewen wrote in a release.

Both MLAs say the same thing is happening in Alberta with Kenney and it should have the same result.

Loewen says Kenney has also lost the moral authority to lead the UCP and when that happens, a leader must step down.

"UCP caucus members need to recognize that Kenney's time is up," said Barnes.

Barnes and Loewen aren't the only Alberta conservatives who are against having Kenney in the driving seat of the UCP.

Brian Jean, who lost a bid for leadership of the party to Kenney ahead of the last provincial election, says the news about O'Toole means party members have the ability to decide who their leaders are.

In a social media post, Jean said the only thing keeping Kenney in power at the present moment is the fact that the rules are different when it comes to federal and provincial conservative parties.

"If the UCP caucus had secret ballot rules like these, then Kenney would have been removed a long time ago.

"But they don't and bullying, threats and intimidation are how Jason Kenney keeps control."

O'Toole resigned as leader of the Conservative Party of Canada after 73 out of 118 Conservative MPs voted in favour of replacing him during a virtual meeting on Wednesday.

The decision was made by secret ballot and 45 MPs voted to continue with him as leader.

It took place because of dissatisfaction with O'Toole's performance as leader and his resignation came a a full year ahead of a scheduled leadership review.

Kenney's own scheduled leadership review will occur this spring.

In his own social media post, Kenney thanked O'Toole for his service as Conservative leader.

He also mentioned how important it was for members to consider "unity as they debate the future."

However, many replies to the premier's statement indicated the same message being sent by opposing members.

The thanks of a grateful province go to @jkenney for his resignation as leader of the United Conservative Party during an incredibly difficult time. Best wishes to the rest of us.

I hope that conservatives remember as they debate the importance of unity.

If only this were real

I've voted PC / UCP in every election for 40 years. Under the direction of this government, never again!

Barnes and Loewen also said that with Kenney's and O'Toole's policies seemingly "in lockstep," the path forward is clear.

"O'Toole's failure is Kenney's failure," Barnes said. "It's time for the UCP caucus to do the right thing, and finish what the CPC caucus began."