CALGARY -- The city’s Green Line Committee will hear from more than 80 members of the public before deciding whether to approve the revised alignment for the massive project.

Several amendments to the project’s plan are expected to be proposed with some members of council expressing concerns with the current proposal.

Stage one of the LRT project is expected to cost $4.9 billion and construction could start in 2021. When the entire project is completed, it’ll run 46 kilometres from Shepard in the south to 160th Ave. North.

The federal and provincial governments have each pledged $1.5 billion towards the project.

“There’s $3 billion from the feds and the province for this project, and that money will go away if we don’t go ahead with this project,” says Rev. Anna Greenwood-Lee with the Calgary Alliance for the Common Good.

“This is a once in a lifetime opportunity to expand our LRT system and if we don’t do that now, it’ll be another generation or two before we get to it,” she says.

Construction of Green Line Stage 1 will be critical in our COVID-19 recovery & will be an investment in our city's future & transportation network. For accurate, up to date Green Line info & to learn how you can speak at the June 1 Committee meeting visit: https://t.co/iKmw31VbMb

If this discussion sounds familiar, it’s because a similar debate happened years ago.

Council previously approved what was thought to be the final alignment in 2017. The plan included a tunnel under the Bow River and several underground stations downtown. But the plan was scrapped due to concerns about cost and administration was tasked with updating the plan.

“If they are looking at any changes to the routing or the communities served, we’d be happy to have a conversation with the city about that to see how we can get more bang for the taxpayers’ buck,” says Premier Jason Kenney.

After receiving public feedback, city administration made several changes to the route.

The new plan includes a bridge over the Bow River and Prince’s Island Park; a shorter tunnel through the Beltline and downtown; the addition of a station at 9th Avenue in Crescent Heights with the LRT running down the middle of Centre Street N.; the incorporation of the LRT line in future development through Eau Claire; and improvements to the North Central BRT service, including express busing and dedicated bus lanes during rush hour.

Calls for project to be changed or put on pause

Not everyone is in favour of the proposed alignment and some are calling for the city to pump the brakes on the project.

A group describing itself as an ‘Ad hoc committee of Calgary citizens,’ led by businessman Jim Gray, wants councillors to “de-risk” the project by shortening stage one to only run from Shepard to 7th Avenue downtown. In a letter to the city, the group says $1.3 billion could be saved by no longer proceeding with the stretch of the project over the river from 7th Avenue to 16th Avenue North.

Gray’s group presented to council in 2019 and, at the time, urged the city to shelve the project and reconsider its potential risks. 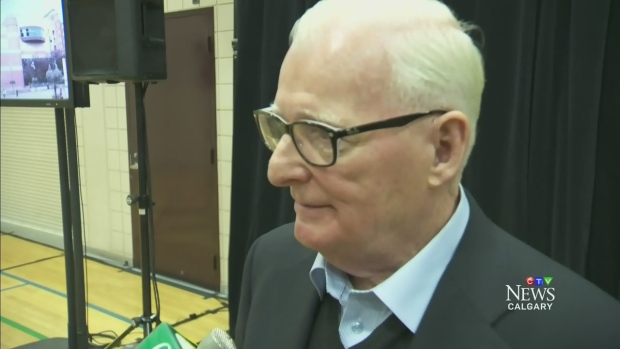 “We are not, as some people suggested, against the Green Line. We’re just against the concept of building two short LRT pieces connected by a very expensive pice of tunnel,” says Neil McKendrick, a former transit planner who is helping out Gray’s group.

“Connecting to the north makes no sense from a transit service perspective. There are very few trips that actually go between southeast Calgary and north central Calgary. And, if there are trips, you can actually do it pretty easily via existing bus services.”

Four council members wrote a blog post agreeing with the idea to limit the scope of stage one of the project.

Cllrs. Jeff Davison, Jyoti Gondek, Ward Sutherland and Peter Demong co-signed an alternative plan), which would see the LRT run only from Shepard in the south to Eau Claire and have a dedicated bus line along Centre Street heading north.

The plan, which the group dubs the “one good line’ option, takes into consideration transit ridership that has plummeted during the pandemic and an economic downturn, the group says.

After the committee makes its recommendations, council as a whole will have final say on June 15. City officials say stage one of the project will create about 20,000 jobs