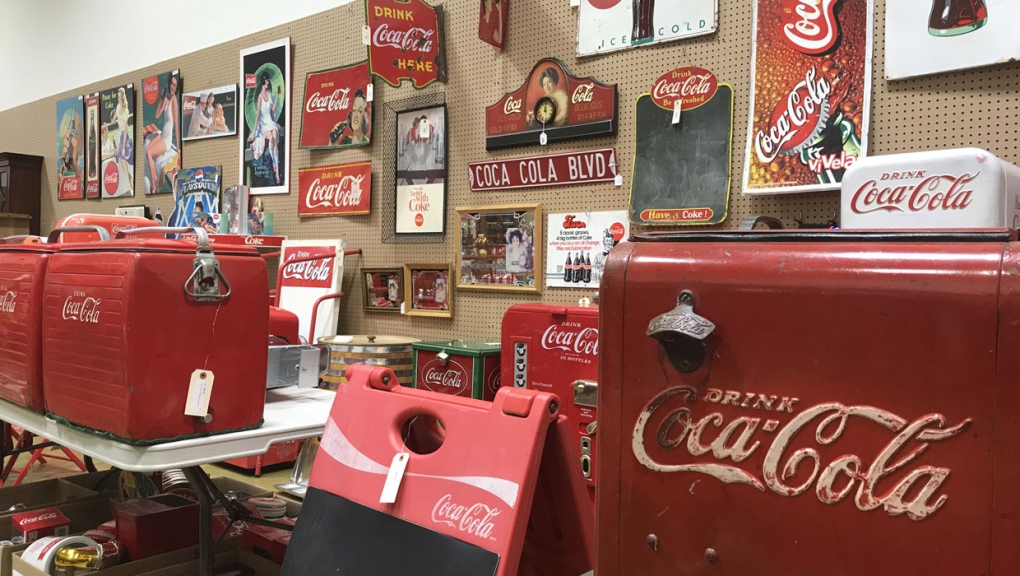 Just some of the over 200 Coca-Cola memorabilia lots up for auction in Calgary. It all belonged to one family housed on a rural property in central Alberta.

More than 200 Coca-Cola items, arguably one of the most marketed and popular soft drink companies of all time, are now being auctioned in Calgary.

Hall’s Auction Services believes there is actually closer to a thousand pieces, as some lots up for bid include smaller items, like bottles, in a given set.

"A lot of people have some memories from their childhood about Coca-Cola. It’s almost insidiuous how ingrained in popular culture it is," said Kevin King, appraiser and president of Hall's Auction Services.

Many items are from mid-20th century but some date as far back to 1908. The brand is globally famous for its memorable marketing, including the jingle I'd Like to Buy the World a Coke (where they coined the slogan 'It's the Real Thing'), a Super Bowl commercial featuring Pittsburgh Steeler legend 'Mean' Joe Greene offering his Steelers jersey to a star-struck child, or K'Naan singing 'Waving a Flag' during the 2010 World Cup.

"Coke is one of the premier collectibles in the collecting world, they've been master-marketers since their inception in the 1800s," said King. "They've stayed at the forefront."

The memorabilia had been a personal collection for one central Alberta family now looking to downsize.

Bidding is being conducted solely online. It closes at 7 p.m. on August 26, but soft staggered bidding is available.