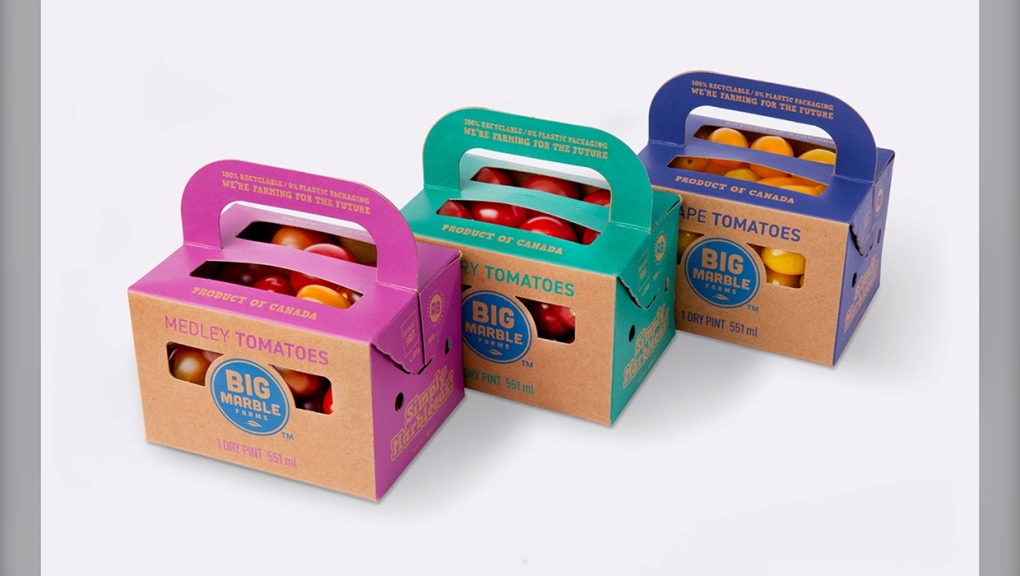 The Big Marble cardboard package is "a step in the right direction" says zero-waste activists.

CALGARY -- A Medicine Hat-based produce farm is trying out a new way to package tomatoes that an environmental advocate describes as a step in the right direction towards creating sustainable produce packaging.

Big Marble Farms is a year-round greenhouse that sells grape tomatoes, cucumbers, peppers, and eggplants, among other things, in places like Sobeys and Safeway, Loblaws and other grocers.

It's not only the largest indoor vegetable producer in Alberta but it's also the farm most likely not to be side-swiped by the ban on single-use plastics announced by the federal government in early October.

Even the company's name is a nod to the need to think bigger picture.

"When you’re in space and look down at Earth, it looks like a big marble - so that’s what that name means,” said Big Marble’s marketing vice-president, Jonathan Schow, in an interview with CTV News.

Midway through the pandemic, Big Marble’s grape tomatoes started to show up in the produce section at Safeway and Sobeys stores – generally a sea of plastic, single-use clamshells – in nifty recyclable cardboard containers, with air vents to let the tomatoes breathe.

Compared to the tsunami of clamshells, the Big Marble cardboard carton, which contains a dry pint of grape tomatoes, feels a little bit like, dare we say it – the future?

Big Marble recently expanded to grow year-round, and they aspire to do it with a minimal plasticized footprint, said Schow.

“We want to do it in the most sustainable way possible,” he said. “So we’re incorporating things like integrated pest management systems – using good bugs to kill the bad bugs.”

The farm uses a heat capture system, converting the heat from the greenhouse into hot water. They use a co-generation system to generate power, to light up the grow lights that help grow produce over the winter.

“We’re always looking for new technology that’s coming out – we always feel like the investment in that is worth the long-term effect it’s going to have on the environment,” Schow said.

Turns out they weren't the only ones - the innovative boxes earned an Excellence Award and Achievement in Sustainability in the North American Paperboard Packaging competition, which are the Oscars of the paperboard industry.

That mindset was behind the introduction of the Simply Marbleous packaging, Schow said.

“It wasn’t something solicited by anyone, it was just something we saw an opportunity to show the customers – because they can’t come to the facility to see what we do – to show we are mindful of our environment,” he said.

Part of the cardboard packaging experiment is because a lot of consumers don’t always recognize what sort of packaging they’re purchasing, so that even when it’s built to be sustainable, the distinction gets lost on a lot of shoppers.

“One of the things we have realized is that a lot of produce companies have gone towards a compostable type of packaging, which we think is the right direction,” Schow said, “But a lot of consumers aren’t educated in how to compost, so a lot of that technology is wasted on the user.

“It’s lost on them because they don’t have the ability to compost, or they don’t have that facility in the backyard. So we think the recyclable concept is the better way to go, because even if it does end up in the landfill, it’s still going to break down. It’s biodegradable.”

Brianna Loughlin, at Plastic-Free YYC, said the best kind of produce packaging is no packaging at all, but added that Big Marble has the right idea.

“It’s definitely a step up from the little plastic cups with the cellophane peel back,” Loughlin said. “Those are really not a blue cart-friendly packaging option.

“It’s really awesome that they’re going this way. We love seeing businesses listening to consumers and doing better for our world.” 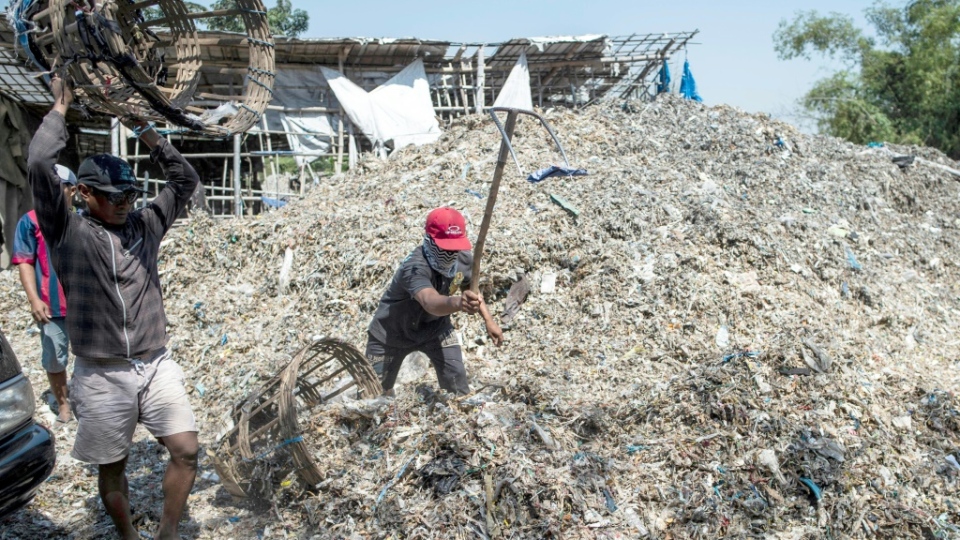 On the other hand, Loughlin added that recyclables are still problematic in a world filling up with them – witness the City of Calgary’s 2018 struggles to find a buyer for its recycling when China said it would no longer accept it.

“As they (Big Marble) move forward, it would be really awesome to see them take this and see if it does well, but also try other options like maybe compostable," Loughlin said.

On Oct. 7, the federal government announced a limited plastic ban, which included plastic bags and straws, but also the somewhat nebulously described “food packaging made from plastics that are difficult to recycle.”

Could that be the ubiquitous clamshell that contains our tomatoes, strawberries, blueberries, raspberries and blackberries all year?

And what would be the implications for the produce industry if that were to happen?

Loughlin said the truth about recycling both plastics and cardboard is that each time it goes into a recycler, it degrades a little bit more.

“The word around recycling is that plastic can never be recycled, it is only downcycled."

“If I have a Coca-Cola bottle and I finish it – it’s the number one type of plastic – when I take it to the recycling bottle depot, it doesn’t get turned into another recyclable bottle, it gets turned into a plastic bag,” she said.

“And then that plastic bag – it continually loses its original composition and it gets downcycled, as opposed to glass and aluminum, (which) are the only two forms of material that can be directly recycled.”

The same goes for paper, alas.

"Paper – like these boxes they’re going to put their tomatoes in – when it goes in a blue bin to a recycling centre, it's going to get turned into probably newspaper or toilet paper. Not into another box.

“And so when I say, we want to change this crutch of recyclables and help people understand it’s not just about it goes into a blue bin and it’s good – it’s about how much waste we’re creating. 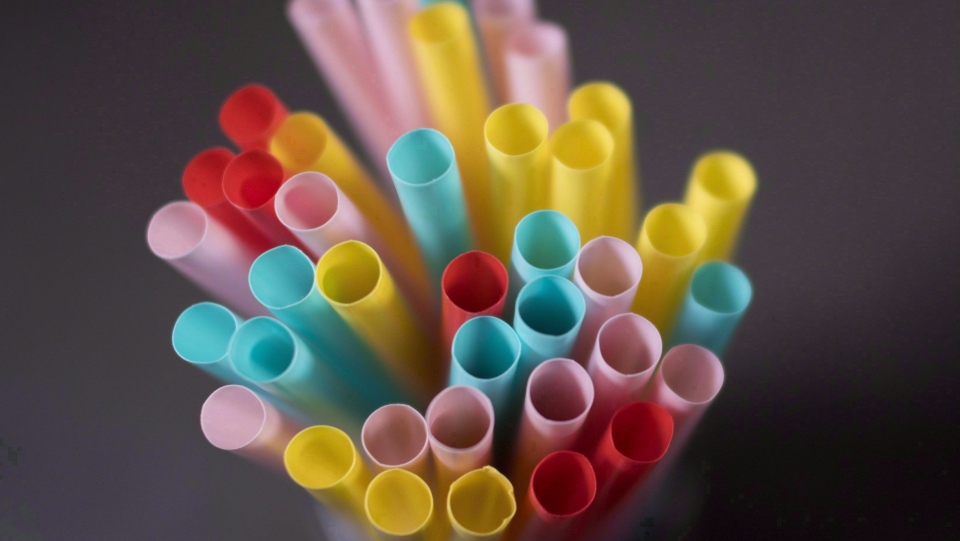 Schow said the price point for producing more sustainable produce and packaging in environmentally-friendly material is not substantial – and one he believes consumers are willing to pay a bit more for.

“It’s not astronomical,” he said. “It’s cents on the dollar. For the price-conscious consumer, why would they want to spend 50 cents more on that size of pint instead of plastic? And we’re hoping that when we get the word out, they’ll understand the benefit of doing that – and I just picked 50 cents out of the air, that’s not the exact number.”

BIG MARBLE HAS BIG ASPIRATIONS TOO

The grape tomato season is winding down for 2020. It's expected to end by the middle of November at the latest before relaunching in June.

Meanwhile, Big Marble continues to look for smarter ways to sell a fresh veggie at a supermarket.

“We’re trialing a bunch of products in those packages to see if it’s a viable option to put mini-cucumbers in them, or mini-peppers or whatever else fits.

“So we’re hoping that that product line will expand and we can really get some good traction – because it’s important to us. It’s not just platitude and buzzwords we’re talking about here. We do realize it’s the direction everyone is going in.”

The federal government's prohibition on single-use plastics will come into effect by the end of 2021.