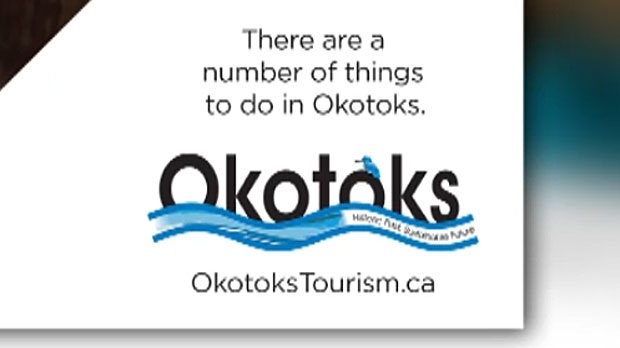 The Town of Okotoks said their original slogan was taken out of context, but they took it all in stride.

There is one other thing to talk about in the Town of Okotoks. Officials say that the community south of Calgary has won an award for last year’s tourism ad campaign.

In September 2015, in an attempt to draw visitors to the community, town officials came up with the idea of the campaign and coupled it with the catch phrase, ‘There are a number of things to do in Okotoks’.

The slogan took off immediately online when people immediately began criticizing it in memes and photoshopped images of the posters, with helpful suggestions about what “things” there were to do in the community.

Officials soon took the mockery in stride, saying that the slogan was taken out of context. A hashtag #thingstodoinokotoks was also launched immediately afterwards, and quickly went viral.

“A ‘number of things to do’ was purposely planned,” said Shane Olson, the town’s economic development manager in September. “If you think of origami, the fortune tellers back when we were in school, there's a little number, so the actual slogan was ‘Let your summer unfold in Okotoks’ so when you unfolded the flap, behind one of the numbers, there is something you can do in Okotoks."

Town officials now say that the campaign was a success, despite the lambasting it received online, which the community soon took in stride.

Okotoks has been given the Growing Rural Tourism Champion Award, which recognizes collaboration with rural tourism partners and providing those partners with promotional and training opportunities.

The award also recognized how the ‘Things to do in Okotoks’ slogan spread online, heightening interest in the community and the Cool Little Towns participants featured in Okotoks’ Visitor & Activities Guide.

For more on the winning ad campaign and to check out Okotoks' Visitor Guide, you can visit their website.