The province is set to move into the third and final stage of its Open for Summer plan on Thursday.

In Stage 3, nearly all pandemic-related health measures will be lifted including the province-wide mask mandate.

According to Alberta Health Services, masks will still be required in some settings, including while on public transit and while inside city-owned buildings.

The City of Calgary's mandatory mask bylaw will remain in place until at least July 5, while Edmonton, Okotoks and Banff have announced they will follow the province’s timeline and remove their rules on Canada Day.

The ban on indoor social gatherings will be lifted and restaurants, bars and retail outlets will once again be able to run at full capacity.

A few measures will stay in place including isolation requirements for anyone who tests positive for COVID-19.  Testing will still be offered to anyone with symptoms and the province will monitor the impact the move to Stage 3 has on case numbers.

"This is just a reminder that if you feel even a little bit unwell, it remains critical for you to stay home and arrange to get tested," said Dr. Deena Hinshaw, Alberta’s chief medical officer of health. "We will also continue to actively investigate and contact trace new cases, as well as screen for variants."

Hinshaw urges Albertans to remain vigilant. "COVID-19 is not going away completely. It remains a potentially serious illness that we must keep respecting."

Premier Jason Kenney has said he does not plan to bring back restrictions, adding that Alberta is not only open for summer but open for good.

The Ship & Anchor Pub on 17th Avenue S.W. says it has decided to keep the mandatory mask policy in place indoors past July 5th, for now.

“We decided it's just a wise idea for interior spaces to remain a little cautious as we come out of the restrictions,” said Nicola Trolez, the Ship's marketing manager.

Starting Thursday, most of the plexiglass barriers separating tables outside will be coming down. The patio will be restriction-free as of July 1. 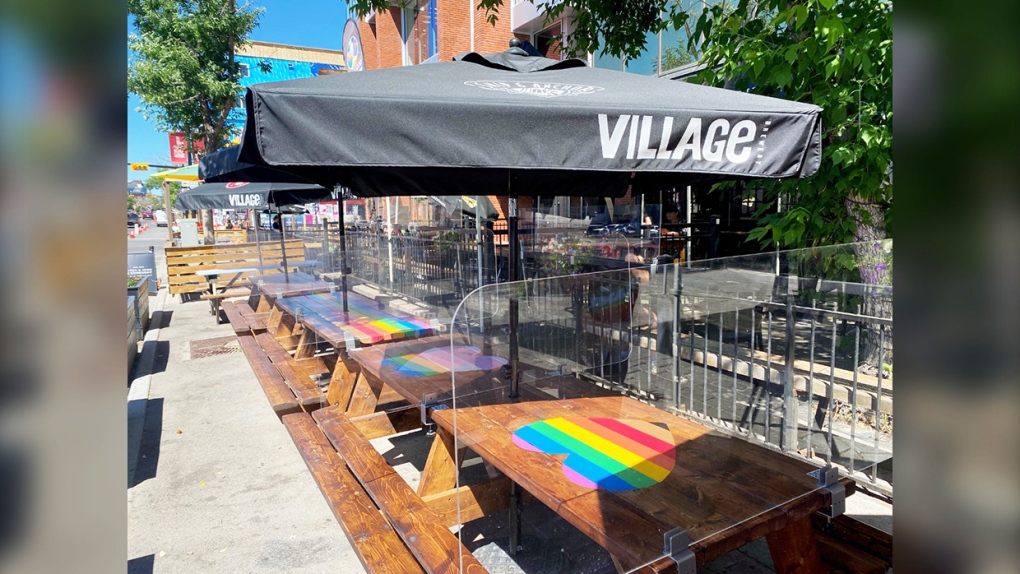 Starting Thursday, most of the plexiglass barriers separating tables outside will be coming down. The patio will be restriction free as of July 1st.

Inside, restrictions aren’t changing yet.

“We’re going to keep our density lower and we are requesting that people bring a mask, whether you’re sitting inside or out so that should you have to go inside, you use it inside.”

Trolez said with the Delta variant circulating and many waiting for second doses of vaccines the business wants to be careful and asks customers to mask indoors when away from their table.

“We are hoping to send a message of caution out to the general public but also for ourselves having to make that decision on how to curate our space going forward,” said Trolez.

Trolez said they have been dealing with mask confusion throughout the pandemic but she says hopefully people will continue to carry a mask.

Trolez said she hopes the city keeps the mask bylaw in place for at least the next few weeks.

“We’re going to monitor the situation, be mindful of vaccine supply, the Delta variant numbers and make decisions accordingly.”