Postal workers protest in Calgary and many other major centres 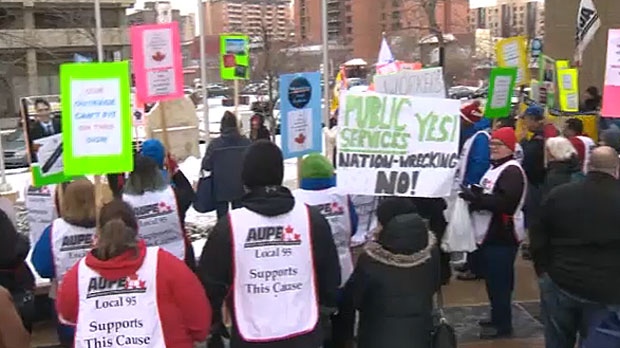 Calgary's protest staged by postal workers and members of AUPE was relatively peaceful in nature, but other protests in Canada attempted to disrupt operations at Canada Post facilities.

Even though Canada Post workers have been forced back to work due to legislation from Ottawa, they aren’t happy about their situation and set up protests in public areas and outside many postal facilities on Saturday.

The federal government passed back-to-work legislation on Monday, after five weeks of rotating strikes by the Canadian Union of Postal Workers that ended up leaving a huge backlog of mail and parcels at depots across the country.

Many of those workers who were forced back onto the job assembled at many postal sorting facilities across the country. Protesters allowed workers to move freely, but prevented any mail from moving.

Other demonstrations, like the one in Calgary, were a lot more peaceful in comparison.

The postal workers were also joined by members of the Canadian Union of Public Employees, who were acting in solidarity with CUPW.

Canada Post says the protests are in violation of a court order and they will be working with authorities to deal with the demonstrations.

Injunctions have been granted in Ontario, Alberta and British Columbia, to prevent anyone from obstructing the operation of Canada Post facilities.