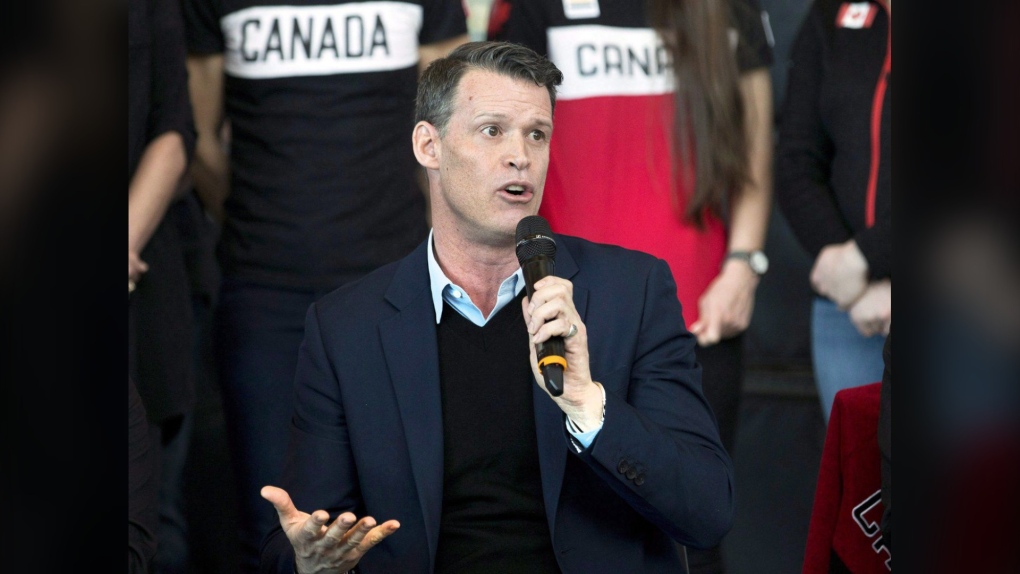 Former Olympic swimmer Mark Tewksbury takes part in a press conference and panel discussion to encourage the city of Calgary to continue a Winter Olympic bid for 2026 in Calgary, Alta., Friday, Apr. 13, 2018. (THE CANADIAN PRESS/Larry MacDougal)

Tewskbury, a member of the Order of Canada, was among a list of dignitaries Prime Minister Trudeau announced on Thursday that included actress Sandra Oh, performing artist Gregory Charles, and Cross of Valour recipient Leslie Arthur Palmer.

"It's such an honour, I was very touched (to be invited)," Tewksbury said.

The 54-year-old said while their "paths crossed a number of times," he only met the late queen once when she came through the athletes village at the 1994 Commonwealth Games in Victoria.

"I had that famous minute of small talk," said Tewksbury, who won a pair of gold medals each at the 1986 and 1990 Commonwealth Games. "I must admit, I thought 'Oh, what's the big deal?' Because I'd seen it from afar, at the Commonwealth Games in '86, and she was often in the stands and swimming. But she just had that presence. It's such a cliché, but I suddenly was tongue-tied, butterflies. There was a presence. She obviously wore her duty so incredibly well."

The 54-year-old Tewksbury was in Manchester at a conference when the queen died on Sept. 8 at 96. The Duchess of Sussex Meghan Markle had given the opening address at the conference four days earlier.

"So, I felt the sadness. And then our event got immediately cancelled, because that's royal protocol. I'm still in a little bit of shock, to be honest," said Tewksbury, who had flown home to Calgary after the cancellation.

Tewksbury was flying to Ottawa on Thursday evening. The delegation, including former Prime Ministers Kim Campbell, Jean Chretien, Paul Martin and Stephen Harper, several former governors general, members of the Royal Canadian Mounted Police and representatives of several regiments of the Canadian Armed Forces, were flying together from Ottawa on Friday.

The state funeral will be attended by 2,000 guests. The queen's coffin will be carried through the historic heart of London, from Westminster Abbey to Wellington Arch near Buckingham Palace on a horse-drawn gun carriage with King Charles III and other royals walking behind.

This report by The Canadian Press was first published Sept. 15, 2022.

Russia on Monday unleashed what Ukraine called a 'massive missile attack' across the country, striking homes and buildings, killing civilians and disrupting electrical power that caused blackouts and cut water supplies for the Black Sea port of Odessa.