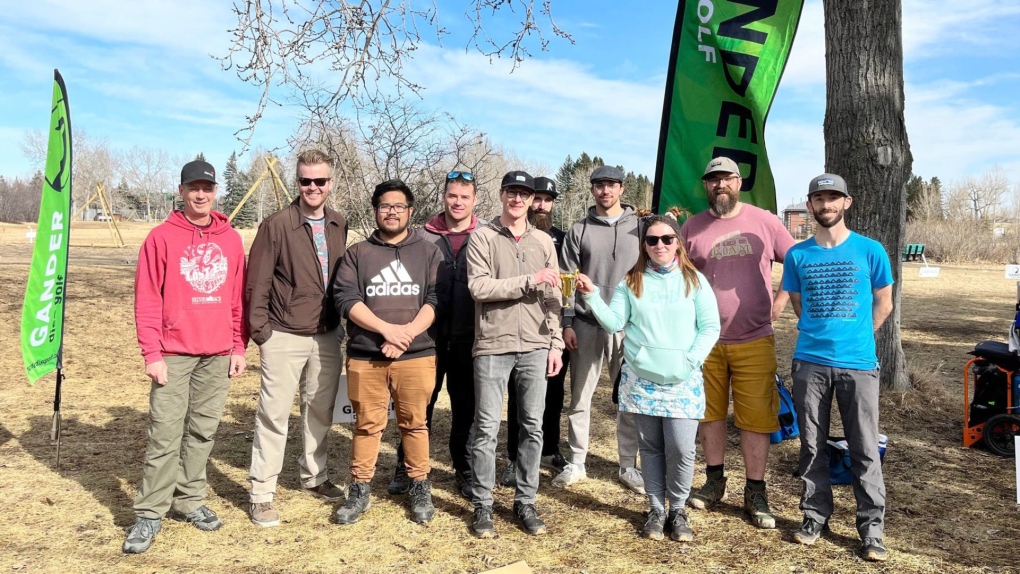 Members of the SAIT disc golf team that was victorious over University of Calgary in the first Canadian intercollegiate disc golf tournament at Currie course in Calgary. (Contributed)

A new post-secondary rivalry teed off in Calgary on the weekend.

The SAIT Trojans and University of Calgary Dinos faced off Saturday in the Showdown, considered the first intercollegiate disc golf tournament in Canada.

More than 30 staff and students competed at the Currie course in southwest Calgary, with SAIT winning based on overall player averages.

Jonathan Guenther from SAIT was also the individual winner with rounds of 69 and 64 and total of 133, just ahead of Josh Meijndert, who finished at 68 and 68 for a 136 total.

"I’m so proud of Jonathan, who I only met for the first time two a few weeks ago, and who came out to a practice I held the week before the tournament," said SAIT head coach 'Frisbee Rob' McLeod.

"I got to follow him in the second round for the last six or seven holes and it was awesome to watch him stick to his game plan, which ultimately led to him shooting the hot round of the entire tournament, and a three-stroke victory."

The event was the first since McLeod was hired by SAIT last fall to build a disc sport program.

"So I didn’t compete, but rather helped out with the tournament, and made sure that my players (and the U of C players) had support throughout the day in case any rules questions came up, or if they needed anything," he said.

"It’s been a while since I coached, and my first time ever coaching a disc golf team, so needless to say I was pretty excited."

McLeod says his initial goal was to build a program with 10 players and there are 13 already registered.

"To build a Frisbee program means to create opportunities for people to try, learn, and play Frisbee – in this case disc golf, but I am also working to build an ultimate team, and establish dodge disc intramurals," he said.

Full results from the event can be found online.