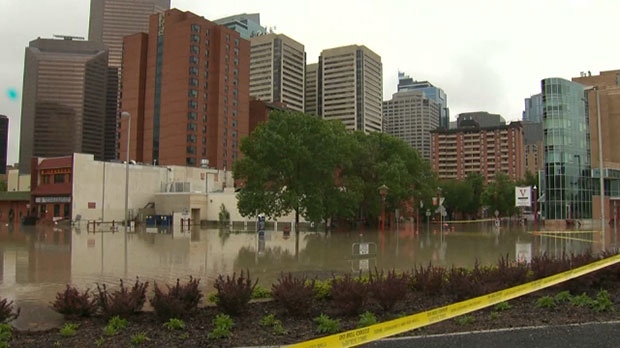 Snowpack in the mountains west of Calgary is above average this year, but that doesn't mean the risk of flooding is also higher than normal.

The real risk of flooding, officials say, depends on how much rain falls in the area over the next two months.

"Over the next couple of months, we’ll be monitoring the rivers 24/7, keeping an eye on any large rain systems that can cause river flooding, while closely watching the snowpack in the mountains as it starts to melt."

To prepare for spring runoff, water levels in the Glenmore Reservoir and Ghost Reservoir have been lowered to create more room for potential flood water.

"In addition to seasonal preparations, in nearly 10 years since the 2013 flood, Calgary is in a better position to be protected from flooding thanks to significant infrastructure investments, reducing Calgary’s flood risk by 55 per cent and potential flood damages by $90 million every year," the city said in a release.

"This year, the downtown flood barrier is in place, creating a continuous flood barrier from the Peace Bridge to the Reconciliation Bridge, helping protect the safety of Calgarians and critical infrastructure in Downtown, Chinatown, East Village and Eau Claire communities. Construction has also begun on the Springbank Off-Stream Reservoir (SR1) west of the city."

Flood season in Calgary runs from May 15 to July 15 each year. A once-in-a-century flood event in 2013 caused an estimated $5 billion in damage.

"Once complete, SR1 is a complete game changer for Calgary, protecting thousands of residents that live and work along the Elbow River and downtown Calgary from a 2013-size flood," said Davis.

"Working with the higher gates at the Glenmore Dam, this infrastructure will reduce damages by over $3 billion through the next century, safeguard Calgary’s downtown, the region’s economic engine, protect critical public infrastructure like roads and CTrain lines and vital services like our drinking water and wastewater treatment plants that we all depend on."

The province is assessing three potential sites for a new reservoir on the Bow River, with a recommendation expected in 2023.

The city is also reminding Calgarians to be cautious around riverbanks at this time of year as they can become unstable.

More information on river conditions and flood risk is available on the city's website.