Millions of Canadians turn to online dating in the hope of meeting that special someone but, instead of finding love, a woman who recently moved to Calgary is now out hundreds of thousands of dollars.

Joanne Kinsley, a 68-year-old widow, was living in her hometown of Muskoka, Ont. in the spring of 2021 when she created an online dating profile on Facebook.

She soon matched with a man who began sending her affectionate messages. The flirtation went on for several weeks before her suitor shared his tale of woe.

"I was talking to him for probably three, maybe four months before he started talking about health and work issues and then he started asking for money," Kinsley told CTV News.

"He worked on an oil boat and he said he had to get a shipment that was sent from the boat which needed to come through Canada."

Kinsley was asked to pay for these shipping charges, which amounted to thousands of dollars.

The requests for money continued for over a year with the scam eventually running its course this July..

"He (the scammer) then said he got off the ship with more issues and said he was hospitalized in Italy."

Kinsley covered those expenses and was eventually prompted to invest in cryptocurrency through fraudulent website links that were sent to her.  She was told to be the beneficiary of a fake $15 million cheque, and spoke on the phone with people posing as lawyers and shipping consultants who told her where to send money.

"I'm just devastated. I'm surprised I'm still here. It's so heartbreaking. I guess the trusting person in me can't understand how people could be so heartless. They don't care. They really don't care."

As a result, Kinsley lost everything and was forced to move to Calgary where her son was able to bring her in and take care of her.

"This situation puts me in a deep state of depression mentally and physically," said Kinsley. "I couldn’t eat without feeling sick. After selling everything I owned, I was living in a motel, at a friend's house, and in a pop-up trailer camper for six weeks with just the bare necessities." 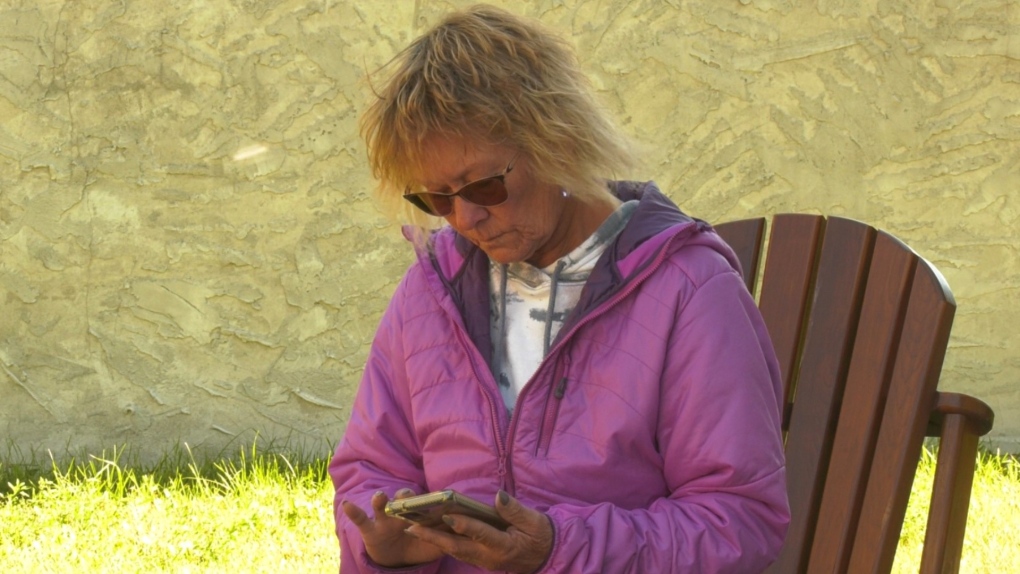 Joanne Kinsley moved from Muskoka, Ont. to Calgary to live with her son after she lost nearly $800K in an online romance scam.

Kinsley says the scammer she was speaking with went by the made-up name of 'Jerry Gravo', but the photos used on his profile were that of Grant Cardone, an online entrepreneur with millions of social media followers.

"I’m sure he was a well-known person so the one that I was speaking to posed as his brother, saying he was his twin and it just went from there and on-and-on with money sent," Kinsley added.

"Usually, the money they had me send was cash via FedEx to a receiver which in my case was, when I was living in Muskoka, the Toronto and Markham area so it was all very close.”:

From the receiver, the money then went to where it was supposed to go, which Kinsley thought was to pay for hospital bills or other shipments that were to be received.

It wasn't until Kinsley's son recognized the photos of Cardone and matched them to Cardone's official Twitter account that the realization set in that the money she was sending was not going to where she intended.

Throughout the entire 14-month relationship, Kinsley says she was not given the opportunity to ever have a video phone call with her scammer and only spoke to him on the phone.

"I know now that if they can't talk to you face-to-face, and they ask you for money, then don't do it," she said.

"That is the first indication that there is something wrong with the situation. It's a scam. I'm not saying everybody online is a scammer because when they start asking for money or personal information that's the time to say no."

Kinsley has since been in contact with the Ontario Provincial Police (OPP) and provided them with FedEx tracking numbers of the money transfers.

Calgary police officials confirmed to CTV News that they are aware of the scam targeting Kinsley, but further action has yet to be launched locally as the investigation by the Muskoka crime unit continues.

"I’m not banking on it, but hopefully if I can get some money back that would be great," said Kinsley. "I just want everyone to be aware. Don't fall into the same situation that I and many other people that I know have. It's just not worth it."

CTV News has also reached out to Grant Cardone's legal team for comment, but has yet to receive a response.

Cardone has previously mentioned that his team is aware of thousands of people using his image and likeness to scam others.

An article posted to Cardone's official website on the topic of scammers provides the following message:

"Look, people, if something sounds too good to be true, it probably is. The world is a brutal place, and the chances of a Nigerian prince, some obscure lottery, or a guy like me contacting you specifically because you have money that we need, and that we will reward you later for it, is just about 0%."

"IF THEY WANT YOUR MONEY, THEY’RE NOT YOUR HONEY": SCAM EXPERT

Dr. Tom Keenan, an expert on online scams and cybersecurity, says romance scammers will use various platforms to find out as much information as possible about their targets to get inside information on how to lure them into love.

"These scammers will go on Facebook, they can find out the names of your kids, they can go on LinkedIn, they can find out where you work, what your hobbies are," said Keenan, who is a professor at the University of Calgary and the author of the book Technocreep.

"We are just giving it all away. I liken it to how fake psychics will go out there and they will look for information on you and then they'll tell you something that amazes you.  Romance scammers do the same thing."

Keenan notes that most romance scams begin on online dating sites or applications such as Match.com, Tinder, Bumble or eHarmony.

He warns users to be aware of evasive behaviour and excuses that prevents them from talking over the phone, over a video call, or meeting in person.

"That's a major red flag and if they want your money, they're not your honey," said Keenan.

"They will tell you, that you’re 'the one' and of course you believe them, but then, sooner or later, they suddenly need money — they have an unexpected medical bill, or they have a bank loan that's come through or something like that.”

The Canadian Anti-Fraud Centre received 1,249 complaints of romance scams from 925 Canadian victims with a combined loss of more than $50 million in 2021.

According to the Royal Canadian Mounted Police (RCMP), romance scams were responsible for the second highest amount of fraud-related dollar loss in 2021, led only by investment scams.

Law enforcement officials note that the actual number of people who have fallen victim to these types of scams is likely even higher because many never report the crime or tell their loved ones due to shame, fear, ridicule or denial.

The RCMP encourages internet daters to search online for the person they are speaking to, and to conduct a reverse image search as the photo in their profile may have been copied from elsewhere.

Mounties add that people should also beware of those who claim to fall in love too fast or push an online relationship forward too quickly, and to never send money to strangers over the internet.

"It is one of the fastest growing genres of scams or frauds that we've noticed," said Gawlinski.

"These scammers pull on people's heartstrings and unfortunately some people get taken for a significant amount of financial loss. So it's important to consult friends or somebody you know or police, talk about the scenario if it doesn’t seem right and we can help save a lot of harm.”

If you or someone you know has been victimized by a romance scam, police say you should stop all communication with that person and contact local law enforcement immediately.

The RCMP also recommends contacting your bank and placing a stop on any cheques or money transfers.

Reports can be filed to the Canadian Anti-Fraud Centre at 1-888-495-8501 or online through its Fraud Reporting System.