Monday's devastating storm in southeast Alberta has some families facing the daunting task of rebuilding and putting the pieces of their lives back together after losing nearly all their possessions.

Strong wind turned regular items into projectiles that ripped through homes, damaged vehicles, sent at least one garage airborne and had people running for shelter.

The catastrophic storm produced funnel clouds but, as of Wednesday, no confirmed tornado touchdowns in the area outside Medicine Hat. 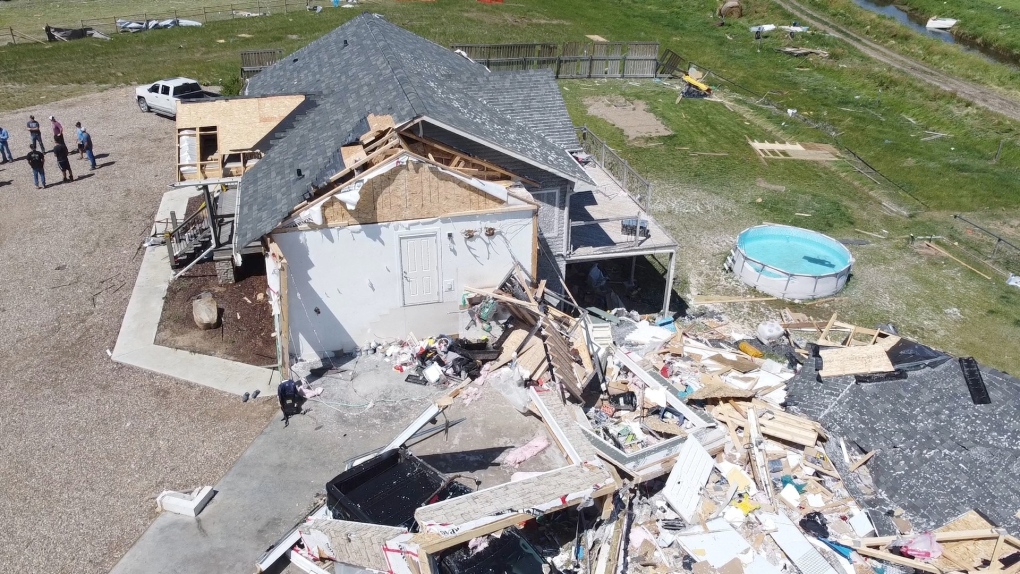 Ryan DePape was outside his Cypress County home with his six-year-old and four-year-old sons Monday afternoon when the storm appeared to manifest out of nowhere.

"We were playing and then it happened fast, got dark and rainy and windy," recounted DePape. "So I shuttled them inside, buttoned up the house. I sent them downstairs and just when that happened, a wind came from the south, and gusted every window, broke every window in the main floor and sent glass across the main floor.

"At that point, debris — two-by-fours, shredded two-by-fours — penetrated the windows. They basically speared through the house and they're still sticking in the interior drywall right now. One went right by me, so (I) dove down there, down the stairs, just to get out of it." 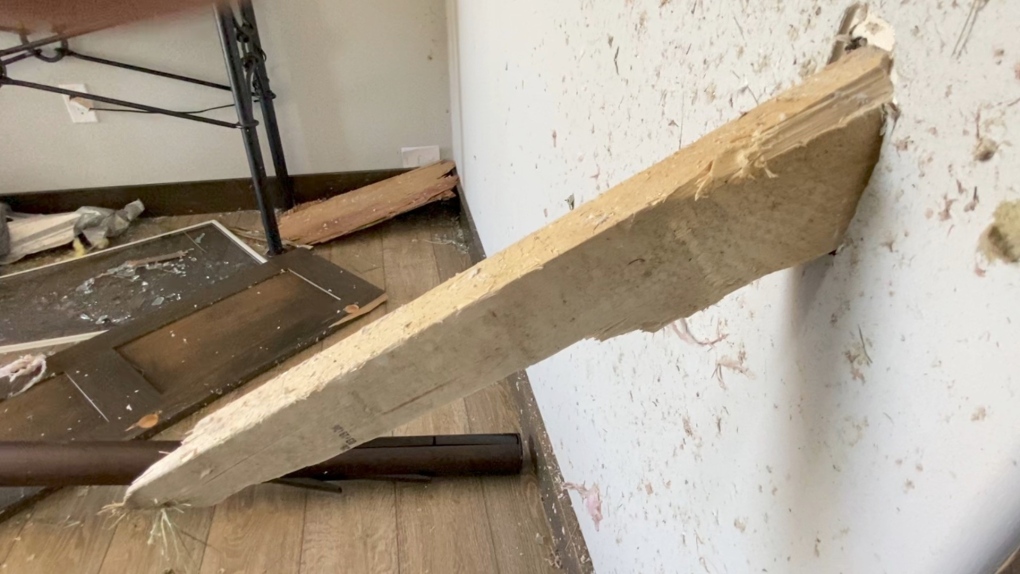 A two-by-four lodged in a wall inside the DePape home in Cypress County, Alta. after a July 18 storm projected the piece of lumber into the house at high speed.

The wind blew in the bay doors of DePape's three-car garage and turned the structure into a makeshift kite, launching it into the air before crashing it to the ground below. The vehicles inside, including boats and ATVs, were destroyed and the gas line severed.

"The noise (from the storm) was tremendous," said DePape. "You couldn't really see something coming. It just almost formed on top of us. We were just, we were just in it. There was no notice. Within a minute it happened." 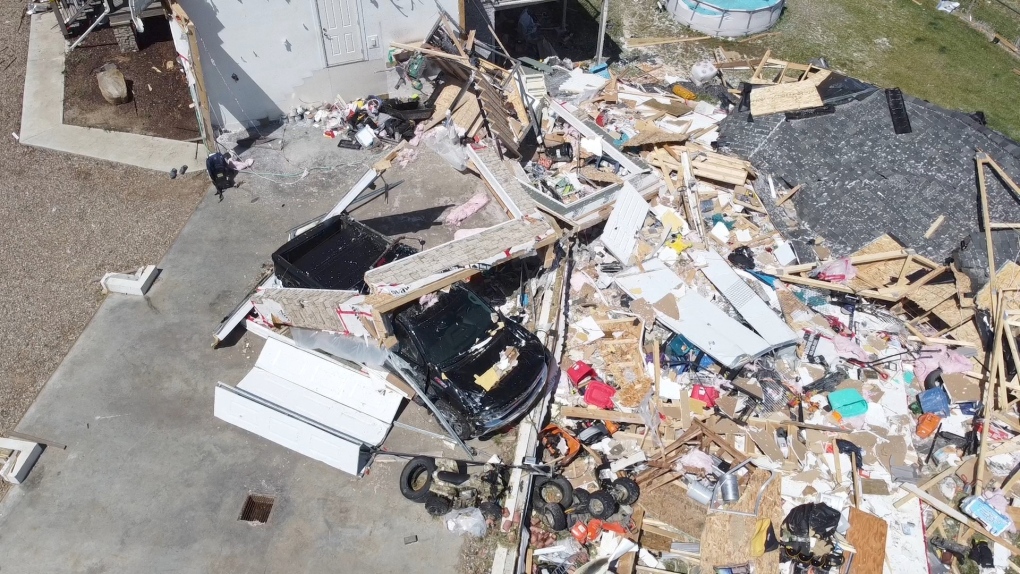 DePape sheltered in the basement alongside his sons and attempted to remain calm and level-headed while answering their questions as they awaited help. Some of his coworkers arrived in mere minutes after receiving his text and helped the family out of their home as the wind had finally calmed.

He soon realized a significant amount of the debris littered outside was not his and had arrived from off his property.

"The trailer windows, this metal, all these two-by-fours, I think it came from a construction site, maybe across the coulee," DePape told CTV News Calgary while touring the devastation on Tuesday. "And a lot of my stuff has gone across the fields to the north."

DePape says it's fortunate that his family and neighbours weren't seriously injured in the storm.

"There was no hospital visits, the family is safe, everyone in the surrounding areas is safe. All this other stuff is replaceable. I mean, we've poured our heart and soul into this place, so it's kind of heartbreaking to take. But yeah, it's all replaceable.

"We've kind of just been going through the rubble, baby books and old family pictures and stuff like that, but it's looking like a long road ahead."

The family has been in touch with their insurance agent but it's not known how much of the damage will be covered. DePape expects he won't be able to move back into his home until the fall at the earliest. 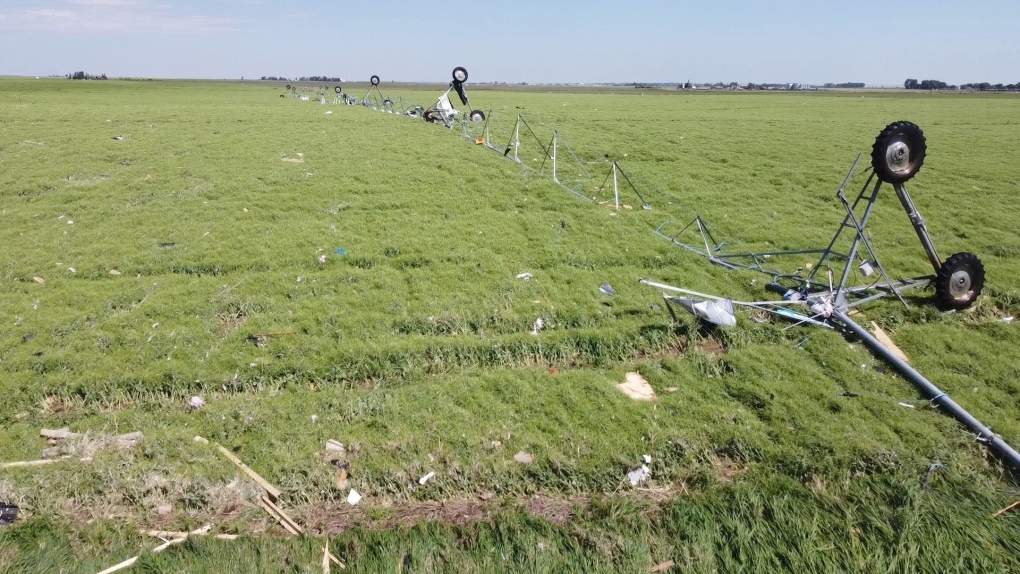 Irrigation equipment damaged in a field along Highway 523 in southeast Alberta following a July 18 storm.

The Canadian men’s national team returns to the FIFA World Cup pitch on Sunday to face Croatia, where they must pick up at least one point or risk elimination. CTVNews.ca will follow the match live.