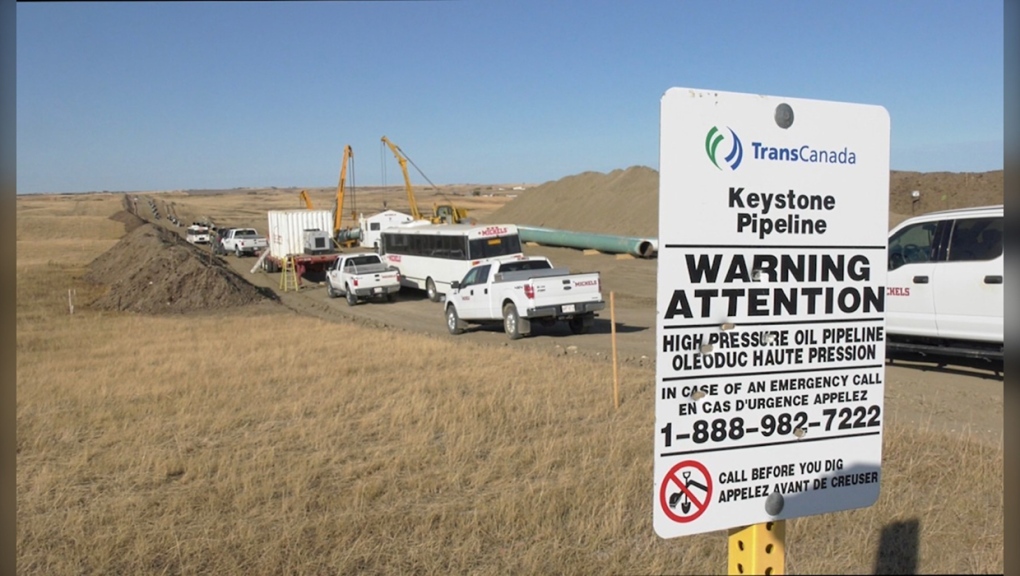 TC Energy said on Jan. 17 that it has a plan to eliminate the impact of greenhouse gas emissions from Keystone XL's operations. (file)

CALGARY -- Cancelling TC Energy Corp.'s Keystone XL pipeline expansion project would not only jeopardize thousands of jobs in Alberta, it would also mean the loss of billions of dollars in corporate income taxes, carbon taxes and royalties, according to energy experts.

Richard Masson, an executive fellow and energy expert at the University of Calgary's School of Public Policy, said cancellation would also threaten the security of crude supply for the one of the world's biggest oil refining hubs.

Without a pipeline to move bottlenecked Canadian diluted bitumen to the U.S. Gulf Coast, refineries will import from countries like Saudi Arabia, Iraq and Russia, he said.

"Connecting by pipeline within North America is the most secure way to feed those refineries," Masson said, noting that Canada has higher environmental oversight and labour standards than do many other oil producing countries.

"Those refineries really need our oil ... and the U.S. Gulf Coast is the best market for our oil," he said.

Transition documents suggest Joe Biden will kill the controversial project as soon as Wednesday when he's sworn in as U.S. president, rescinding a construction permit granted in 2019 by predecessor Donald Trump.

TC Energy announced a plan Sunday for the Keystone XL project to achieve net zero emissions, even as its future appeared in doubt.

The pipeline company said it has a plan to eliminate the impact of greenhouse gas emissions from Keystone XL's operations.

"Climate change is a serious issue and we have an important role to play in managing GHG emissions while balancing the need for safe, reliable and economic energy," TC Energy chief executive Francois Poirier said in a statement.

The company's environmental plan along with agreements it has signed with trade unions and Indigenous groups shows it's "serious about doing the right thing," Masson said.

"They're ticking every box," he said. "There's also evidence that oilsands greenhouse gas intensity has come down about 30 per cent and it could be reduced further as new technologies come onstream."

Still, the pipeline has become a flashpoint in the debate over climate change and fossil fuels, and the new environmental plan is unlikely to sway entrenched positions, observers say.

"Because it crosses the border, it's always been super high profile," Masson said. "There's been a lot of environmental opposition."

In August, TC Energy struck a deal with four labour unions to build the line itself. And it followed that up in mid-November with a deal for five Indigenous tribes to take a roughly $785 million ownership stake

The company said net zero emissions will be achieved when the pipeline is placed into service in 2023 by buying renewable energy from electricity providers, and if it is not available it will purchase renewable energy credits or carbon offsets.

TC Energy is also committing that additional renewable sources along the pipeline's route will be developed by 2030, phasing out any potential need for renewable energy credits or carbon offsets.

Once complete, the Keystone XL expansion is expected to carry up to 830,000 additional barrels a day of diluted bitumen from Alberta's oilsands to refineries along the U.S. Gulf Coast.

Biden was vice-president in 2015 when Barack Obama rejected Keystone XL for fear it would worsen climate change. Trump approved it again in 2019.

This report by The Canadian Press was first published Jan. 18, 2021