CALGARY -- Nathan Haverko has had a passion for cooking from the age of three and now his culinary talent has earned him the attention of star chef Gordon Ramsay.

"I’ve just always had a love for the kitchen." 15-year-old Haverko told CTV News, adding that he’s known he wants to be a professional chef for about six years now.

"I just like that anyone can do it and it doesn’t take long to understand how you do it, it just takes a lot of practice and listening to chefs like Gordon Ramsay."

Haverko learned how to cook from his parents, until a funny thing happened. He got better than them.

"They taught me a lot about how to cook, but it then I just started excelling past what they taught me."

Nathan was born with a rare disease called Cystinosis, a condition characterized by accumulation of the amino acid cystine (a building block of proteins) within cells. Excess cystine damages cells and often forms crystals that can build up and cause problems in many organs and tissues.

"From a young age we literally nursed him back to health," she said.

Healthy foods along with the right medications made it possible for him to live and grow and perhaps that is what sparked his interest in the culinary arts.

"He was never interested in sweets and sugars and chips, he’d rather eat a wholesome meal." she said.

The Haverko family has always had gardens and have been making their own spices and preserves for years.

Nathan started a TikTok account in August to show off some of his cooking creations, but it wasn’t until recently that he got his big breakthrough.

Bounty, a paper towel brand and Gordon Ramsay sponsor, reached out to Haverko just before Christmas and requested he make a TikTok video for Ramsay to duet. "It was pretty crazy- like a dream come true." Haverko said, "to get Gordon Ramsay to know my name at only 15 when a lot of people don’t get him to notice them over a lifetime." 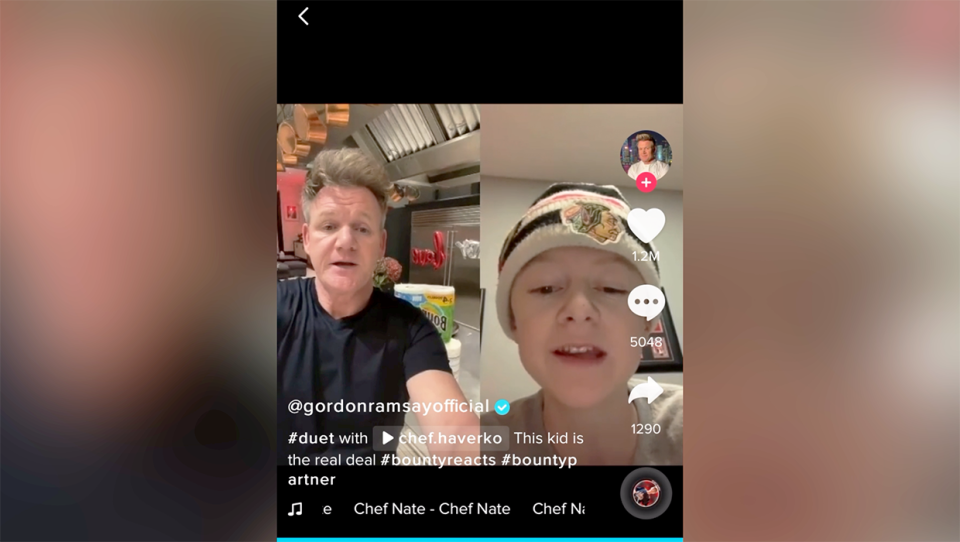 Haverko’s TikTok account blew up gaining more than 30,000 followers, but that’s just the beginning of his plans. "After culinary school I want to go into owning my own food truck and then work up to starting my own restaurant, and then eventually maybe having cooking shows."

Tanya says she’s very proud of her son. "He learned to rise above the disease and find what he’s passionate about at 15 years of age," she said.

"A lot of us might not even find that passion in a lifetime."

To check out some of the young chefs cooking visit his TikTok or Instagram @chef.haverko