Thousands of Calgarians displaced by flooding

The City of Calgary is still under a local state of emergency due to the high river flows and heavy rain.

The downtown core and several neighbourhoods in low lying areas have been evacuated.

About 75,000 people have been forced from their homes and the downtown - an area where approximately 230,000 people work on a typical Friday – is empty.

People living in three seniors’ homes in the flood zone were forced to evacuate to the Winsport arenas in the early hours Friday morning.

About 1,000 people were evacuated from the Calgary Drop-In Centre at about 7:30 a.m. Friday. Clients were bussed to the Old Quality Inn on Edmonton Trail. The Drop-In Centre bought it last spring.

Staff say they need volunteers, food and supplies like blankets. If you can help or have supplies to donate, stop by the hotel at 4804 Edmonton Trail N.E.

More than a dozen communities have been evacuated. They include:

The city is updating evacuations on its website and is providing maps of those neighbourhoods that are on the list.

Evacuees should ensure that they take identification, prescription medications and other critical personal items with them.

Anyone with pets should also take them with them and if that is not an option, pets can be taken to the Animal Service Centre at 2201 Portland St. S.E.

City officials say water quality in Calgary has not been affected and there is no boil water advisory in place at this time. Despite that, many Calgarians were rushing to stock up on supplies.

Grocery stores all over the city were packed with people, like Joanne Dunstan, preparing for the worst.

“It’s just a mad house,” said Dunstan. “They’re out of water, but everybody is very friendly, helping to unload their groceries, pack them up and exchange carts. Everybody is in good humor actually, but they’re out of a lot of stuff.”

Low lying areas are under water. Many of the city’s parks have become lakes. Prince’s Island Park and Bowmont Park are flooded and Southland Dog Park is completely submerged.

Calgary police and emergency resources are stretched to the limits.

Getting around the city has been a challenge. Many roads have been washed out and police are blocking off entry into the core and evacuated communities. More on road closures here.

Calgary Meals on Wheels will not be delivering meals to areas in Calgary which are under mandatory evacuation.

Schools and universities in Calgary and surrounding area have been closed. For details, click here.

The Calgary Emergency Management Agency (CEMA) and its partners continue to assess the situation and will update as needed.

As of 8:00 p.m. the rivers were running fast and high but the Mayor says water quality is still good.

He advises Calgarians to reduce water usage and stay away from the downtown.

Mayor Nenshi is optimistic that the areas farther upstream will be able to return to their homes soon.

The city is utilizing all its resources to build berms, pump out water, and fill sand bags.

The city last activated the Municipal Emergency Plan in July 2012, when an explosion and fire at a downtown building shut down a number of services. 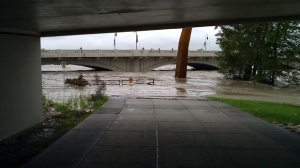 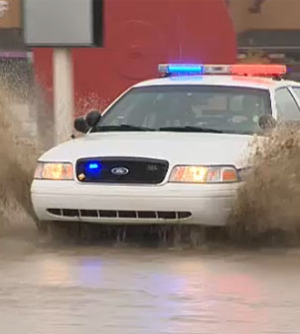 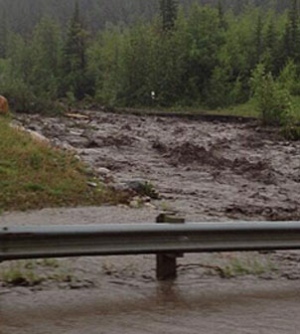 All of Canmore on edge because of flooding