Several homes damaged after tornado touches down near Sundre, Alta.

Several homes damaged after tornado touches down near Sundre, Alta.

Authorities tell CTV News that several homes in and around the town of Sundre were damaged when a tornado touched down earlier on Thursday.

Environment and Climate Change Canada issued the tornado warning for Mountain View County near Sundre shortly before 3 p.m., but downgraded it to a tornado watch at around 4 p.m.

Mountain View County is located between Calgary and Red Deer and includes the communities of Carstairs, Cremona, Didsbury, Olds and Sundre.

Environment Canada says the storm of concern produced a tornado, telling CTV News it touched down south of Sundre, north of Bergen.

According to RCMP, six to nine homes in the vicinity were damaged in the storm, but there have been no fatalities.

Police say officers went door-to-door in the affected communities and made sure everyone was accounted for.

There is no information on any injuries. 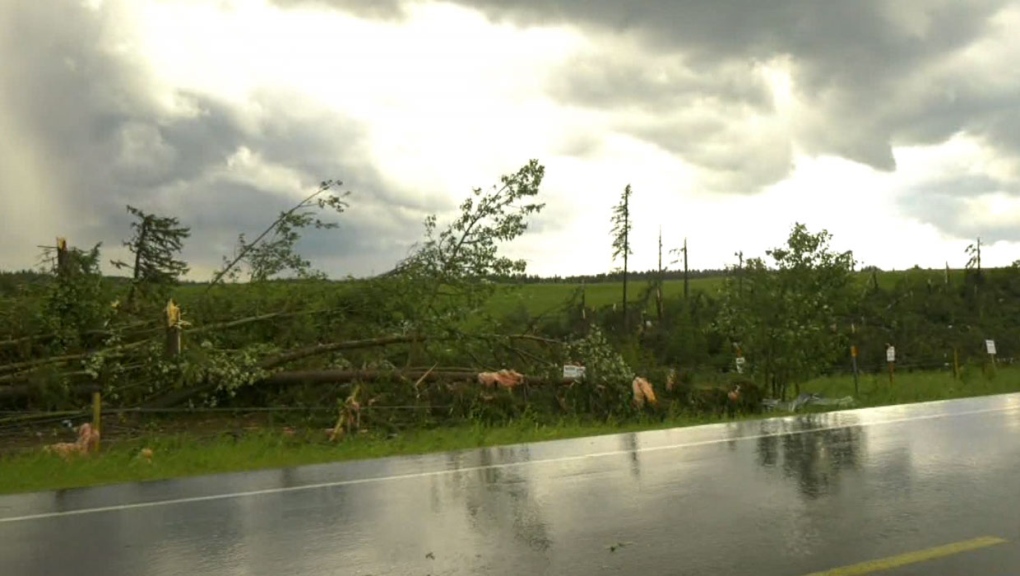 Tornado warnings are issued when imminent or occurring thunderstorms are likely to produce or are producing tornadoes.

Tornado watches, meanwhile, are issued when atmospheric conditions are favourable for the development of thunderstorms that could produce tornadoes.

Timelapse of the #tornado near sundre #skstorm at 2:30 pm pic.twitter.com/UTNHyAWhd2

"In the event of a tornado, or if a tornado warning is issued for your area, it is recommended you take the following actions: Go indoors to a room on the lowest floor, away from outside walls and windows, such as a basement, bathroom, stairwell or interior closet," said Environment Canada.

"Leave mobile homes, vehicles, tents, trailers and other temporary or free-standing shelter, and move to a strong building if you can. As a last resort, lie in a low spot and protect your head from flying debris."

Another funnel wrapping up on the storm east of Bergen 3:31pm #abstorm pic.twitter.com/rkbWPLqtHd

According to Alberta Emergency Alerts, a rotating severe thunderstorm that had the possibility to produce a tornado was first located 15 kilometres south of Cochrane, moving east at 20 km/h, at around 4:30 p.m.

This is a developing story and we will have more details when they become available...