U of C hosting women's national volleyball championship this weekend

In 2020, the U of C Women's volleyball team were all set to host the national championship for the fourth time in school history.  But at the last second the COVID-19 pandemic took it away.

Now two years later, the U of C finally gets a chance to host the top eight women's teams in Canada.

Second-year setter Stella Rains remembers that day in 2020 and says it wasn't an easy one.

"It was really heartbreaking to be like on the way to the banquet and have it all called off at the last minute," said the second-year kinesiology student.

"It's a very different team now but everyone is really pumped to go out there and show what we got."

The Dinos take to the floor for their first game on Friday night at 6:00 at the Jack Simpson Gym.  The Dinos were just 5-13 in the regular season and go into the Nationals as the eighth seed. That means they have to face the number one ranked Trinity Westerns Spartans in their opening match.

The Spartans are a powerhouse.  They were 15-1 in the regular season and cruised through the Canada West playoffs with a perfect 6-0 record.

Team captain Kenzie Vaandering knows it's going to be a tough test.

"They're a great opponent but I think the great thing about the Nationals is that you come in and those records don't matter anymore.

"It's one game and you're done and it's kind of whoever shows up and works the hardest and has the best game plan is going to take it and move on.

"We have just as much of a shot at it as they do so we're excited to play tomorrow (Friday) and take it to them."

The Dinos will go into this match as huge underdogs.  They'll have to be nearly perfect against the Spartans if they want to advance on the championship side.

First year Dino Michela Alongi said in a short tournament anything can happen, you just have to get hot at the right time. 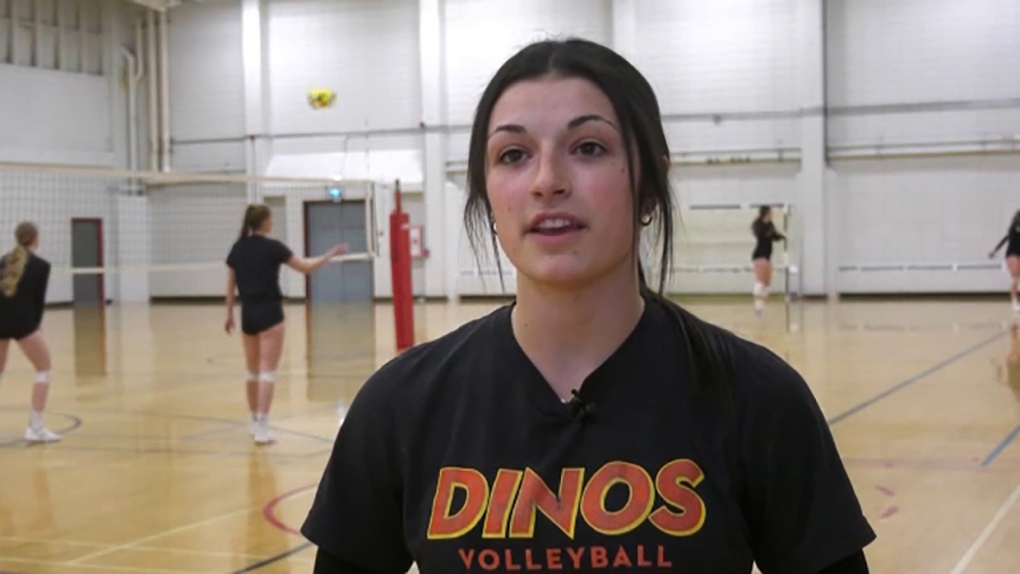 First year Dino Michela Alongi said in a short tournament anything can happen, you just have to get hot at the right time.

"Yeah it's going to be difficult but I feel like if we play our game, play defence like we know how to and kind of show up with some grit we can try our best and see where it goes."

GOING OUT IN STYLE

Whatever happens with the Dinos in the tournament, it's still going to be a special time for Vaandering.  This will be her final season and she says it'll be great to wrap up her career in front of the hometown fans.

"For me like two years ago thinking about that for my seniors and what I wanted to do is just play for them and try to get them a national championship," Vaandering said.

"And now being in that position and having the young girls on our team saying the same things like we're playing for you Kenzie.

"For your last year it's really heartwarming," she added. "And I'm super-excited to play in front of the crowd."

Here's a list of the other teams competing in the nationals