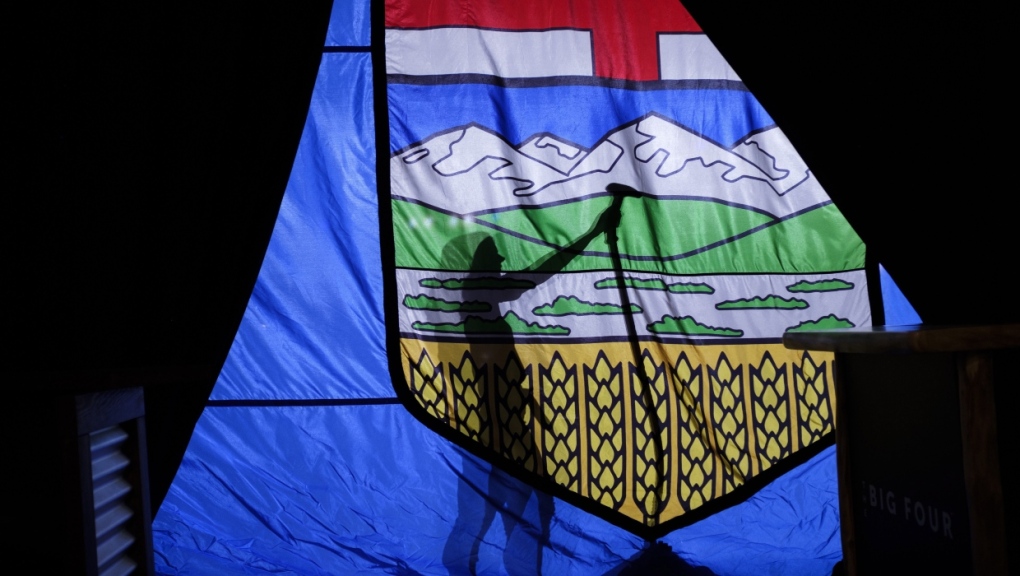 A campaign worker steams the wrinkles from a large Alberta flag at a United Conservative Party event in Calgary on April 16, 2019. (THE CANADIAN PRESS/Jeff McIntosh)

Nadine Wellwood took to Twitter on Monday night to say she would appeal the disqualification of her nomination as United Conservative Party candidate in the riding of Livingstone-Macleod.

The party's decision isn't stopping her campaign, however, with Wellwood saying she continues to plan meetings with residents of the southern Alberta riding in preparation for the upcoming provincial election.

Wellwood released a statement saying she’d received a letter earlier in the day, saying, “the party candidate selection committee rejected” her application “based on a referral from the executive director of the UCP.”

“The reasoning given for my disqualification, most are conjecture, or a matter of personal opinion based off of social media posts I had interacted with, as little as a “like” or a retweet, in the past.” Wellwood said.

“Similar disqualifications were conducted under the previous UCP leader, in ridings like Rimbey-Rocky Mountain House-Sundre or Cardston-Siksika, to ensure a preferred candidate would be selected.”

While the letter arrived Monday, Wellwood said she’s known what was coming for about a week.

“While I was on my way to meet with the local candidate nomination committee, I happened to receive a call from a senior government staffer that advised me that the party had already decided I was to be disqualified,” Wellwood’s statement says, in part.

Wellwood went on to say the call was disappointing, but she met with the local candidate nomination committee anyway and was approved with unanimous support, and that should mean something.

“As the local candidate selection committee for Livingstone-Macleod unanimously put forward my name in support of my nomination to become the candidate on record, I believe that the party elite have over-reached their authority, and this action itself threatens the integrity of the UCP by denying the grassroots members and their chosen local committee members the choice in who represents them in the legislature,” she said.

A spokesperson from the UCP was not immediately available for comment Monday night.

Prior to her announcement last month that she would seek UCP nomination in Livingstone-Macleod, Wellwood was a People’s Party of Canada candidate in the federal riding of Banff-Airdrie in the previous two federal elections.

She ran in Alberta’s Senate nominee election as a member of the PPC as well.

While Wellwood did not say specifically which social media posts she felt sunk her with the UCP, she has used Twitter as a platform to take swings at then-premier Jason Kenney and his government’s public health measures during the COVID-19 pandemic.

She has been critical of COVID-19 vaccines and vaccine passports, touted ivermectin as a treatment option for COVID-19 and liked and/or retweeted posts comparing COVID-19 protocols to Nazism.

Dr. Kory - Ivermectin obliterates CV-19! Can be used as a prophylactic and an effective treatment. Kenney opts to call in the military but denies Canadians treatment. Why? LIVE: Doctor Testifies at Senate Homeland Security Hearing ... https://t.co/gqUp5b9Wq0 via @YouTube

This is discrimination and tyranny.The PPC outright rejects a class society where some Canadians have more rights than others. The PPC is the only Federal Party that rejects mandatory vaccines and vax passports. All Canadians have equal rights and equal opportunity under the law. https://t.co/rV8Lb2a0zx

(The last of the above tweets was liked.)

Roger Reid represented the riding of Livingstone-Macleod as a UCP MLA at the time Wellwood stated her intention to seek nomination.

Reid pulled out of the race earlier this month, leaving just Wellwood in the running.

Still, in Monday’s statement, Wellwood said she knew her nomination would be difficult to come by.

“I knew in putting forward my name as a nominee that the hardest part of the process would be to get past the gatekeepers installed by Jason Kenney,” she said.

“As some may be unaware, the Jason Kenney faction of the UCP board is still in place and making all party decisions until the newly elected members are able to participate at the first UCP executive board meeting later this month.”

Wellwood said she believes the party’s decision should be overturned.

“I will continue to meet with constituents, host events, and listen to the concerns of residents in the riding. Hundreds of new UCP members have already stepped forward in support of my nomination, and I will not withdraw my nomination or give up on their hope for a strong and principled voice that will represent their views and interests in the legislature.”

Canada's health care system is not working as well as it should and that has to change, Prime Minister Justin Trudeau said Tuesday as he prepared to meet the premiers to work on a new health-care funding deal.

Search teams and emergency aid from around the world poured into Turkiye and Syria on Tuesday as rescuers working in freezing temperatures dug, sometimes with their bare hands, through the remains of buildings flattened by a magnitude 7.8 earthquake. The death toll soared above 5,000 and was still expected to rise.

China said Tuesday it will 'resolutely safeguard its legitimate rights and interests' over the shooting down of a suspected Chinese spy balloon by the United States, as relations between the two countries deteriorate further. The balloon prompted U.S. Secretary of State Antony Blinken to cancel a highly-anticipated visit to Beijing this week that had offered slight hopes for an improvement in relations.

John Benoit of West Jeddore, N.S., says he has been beachcombing for over 50 years, but his most recent discovery -- a Killick anchor -- is by far his most memorable.

Will Biden's second state of the union mark a less protectionist approach to Canada?

A new poll suggests a majority of Canadians still see the United States as their country's closest ally, even in an age of isolationism and protectionist policies.