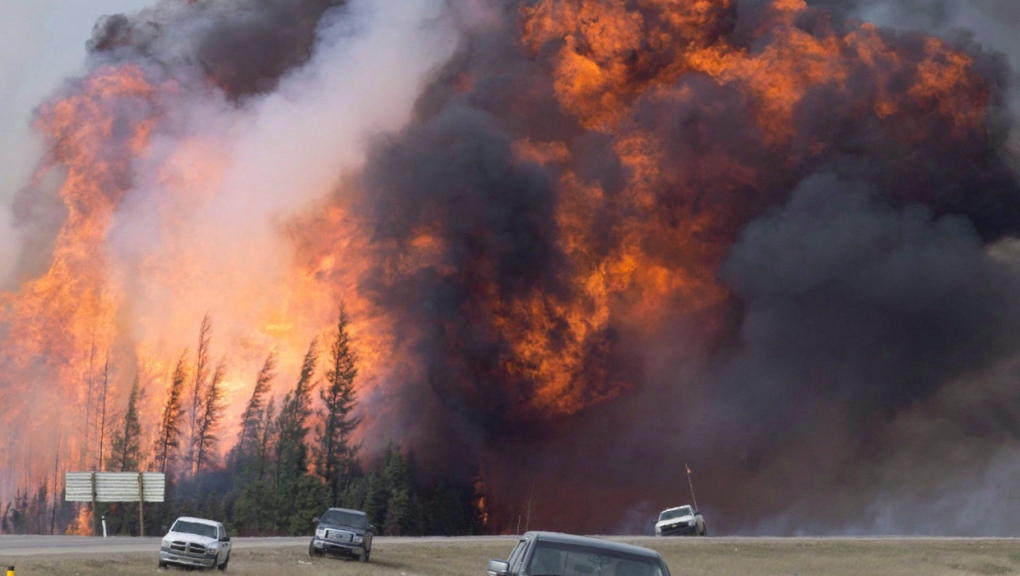 A wildfire rips through the forest by Highway 63, south of Fort McMurray, Alta., on Saturday, May 7, 2016. (Jonathan Hayward / THE CANADIAN PRESS)

The health effects of wildfire smoke are more serious than most people realize says a medical researcher studying the effects of the 2016 Fort McMurray wildfire.

“Basically when you breathe that wood smoke, it is exactly the same as if you are smoking cigarettes continuously. It is no different,” said Dr. Paige Lacy, Alberta Respiratory Centre research director.

Dr. Lacy is working on a study of about 200 RCMP officers who worked around Fort McMurray during the 2016 wildfire. Virtually none of them had access to properly fitted respirators.

She says the results were striking.

“Because of that one transient exposure lasting anywhere between one to 28 days, they ended up with a kind of persistent elevated asthma diagnosis,” said Lacy.

The same risk is there for anyone exposed to forest fire smoke.

Dr. Lyle Melenka, medical director and respirologist with Synergy Respiratory Care, evaluated all of the RCMP officers in the study.

While he did find some Chronic Obstructive Pulmonary Disease (COPD) and abnormal x-ray results, they were no different in the test subjects than the general population.

“But we definitely saw a major increase in the amount of asthma the officers had,” said Dr. Lacy.

The study focused on officers who were non-smokers and Dr. Lacy says 98 per cent of the officers did not have access to properly fitted respirators.

Air quality advisories are in place throughout Alberta as a result of smoke from the 29 wildfires burning around the province, including the massive fires around High Level.

Nina Snyder with the Alberta Lung Association says anyone with a lung condition should make an emergency plan with their doctor in advance of wildfire season, prepare an emergency kit and download the free Air Quality Health Index Canada app.

Dr. Lacy says wildfire season is a public health issue and would like to see the province come up with a plan to more aggressively stamp out fires, before they grow too large.

“I really believe they need to be much more proactive about clamping down on forest fires as soon as they come out.”

She also says that any responders expected to spend time in smoky conditions should be provided with a properly fitted respirator to protect their lungs.