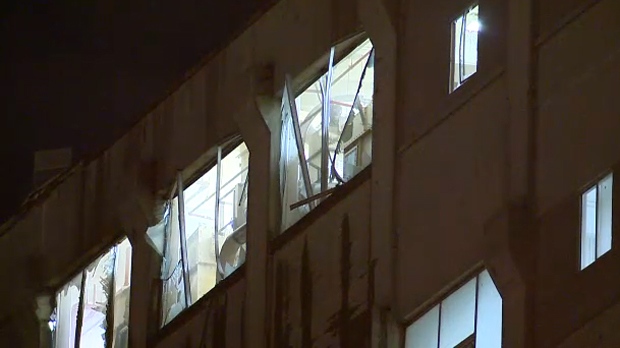 Firefighters, EMS and police were called to the ADM Milling Company, in the 4000 block of Bonnybrook Road Southeast, shortly before 7:00 p.m. following reports of an explosion and arrived to discover shattered windows on the tenth floor of the building.

“At approximately 6:45 this evening, the fire department got called to the 4000 block of Bonnybrook Road Southeast for the reports of an explosion at a commercial factory,” explained Acting Battalion Chief Bruce Gelhorn of the Calgary Fire Department. “Upon investigation, they determined that yes, there was actually an explosion so crews did enter the building.”

“Safety was a concern and that’s why a second alarm was called for this facility to get additional apparatus and resources here to help with searching the building and making sure all people had been evacuated.”

Gelhorn confirms there were 17 workers inside the building at the time of the explosion and all are accounted for. There were no reports of injuries.

According to the company’s website, the plant is a wheat mill that produces flours, bakery mixes, bran and wheat germ.

The cause of the explosion has not been confirmed and is under investigation.