CALGARY -- New disease models released by the province show Alberta’s sacrifices are paying off, giving hope for a gradual reopening of the economy in the coming months.

The new models show the province is well ahead of what was predicted early this month. The likely peak will come in at less than 600 hospitalizations — a number that could drop to as few as 300.

Protestors gathered in front of the provincial legislature Wednesday, with signs calling the pandemic a hoax and calling for the immediate lifting of restrictions.

While the protesters represent a very small minority, their anger comes from the very real experience of massive job losses and widespread fear for family finances.

New poll numbers to be released later this week are expected to show the level of concern over the health of the economy is similar to people's concern for the health risk posed by COVID-19. 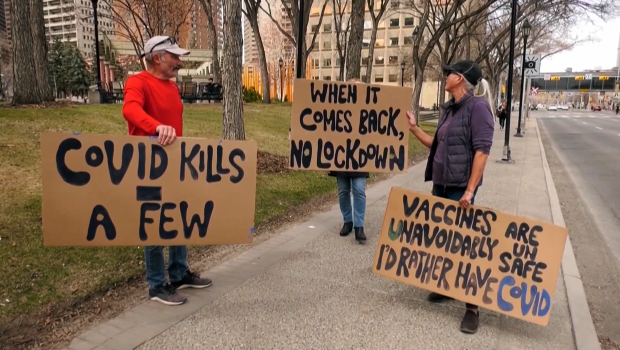 "Albertans should feel very proud of what we've done," Dr. Mody said. "But the virus hasn't changed and the virus has the potential to do in Alberta what it's done in other very scary scenarios, like New York and Italy and Spain."

Premier Jason Kenney has said Alberta’s reopening strategy is going to be similar to Saskatchewan’s, where the first of five phases of easing restrictions will start on Monday May 4.

At first medical and health services will be reopened, followed two weeks later by low-risk outdoor activities such as golf and camping.

There is no timeline yet for phases three through five which will include restaurants and salons, followed by pools and playgrounds and eventually allowing for the resumption of large gatherings.

In her Wednesday briefing, Alberta’s chief medical officer of health Dr Deena Hinshaw said no one should expect to wake up to the world as it was any time soon.

“Some measures, such as remaining two metres distant from others, and making sure that if we’re sick we stay home, those measures are going to be in place for many many months,” said Hinshaw.