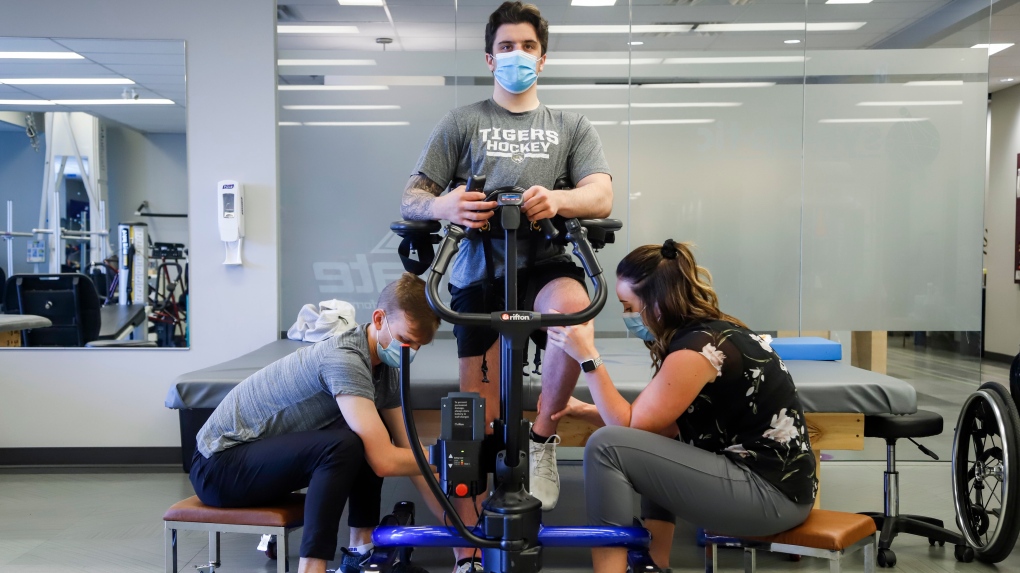 Humboldt Broncos bus crash survivor Ryan Straschnitzki, centre, works out with the help of physiotherapists Jill Truman, right, and Matthew Wright, during a training session in Calgary on Thursday, June 25, 2020, with a new epidural stimulator he received in Thailand last fall. (THE CANADIAN PRESS/Jeff McIntosh)

CALGARY -- At first glance it appears that Ryan Straschnitzki, the former Humboldt Broncos hockey player paralyzed from the chest down two years ago in a Saskatchewan bus crash, is paying close attention to the black smartphone in his hand.

But on closer inspection it's actually the remote controller for the epidural stimulator he had implanted during spinal surgery in Thailand last fall.

The device sends electrical currents to his spinal cord to stimulate nerves and move limbs. On the urging of his physiotherapy team Straschnitzki can kick out his legs - first the left and then the right.

He has had a lot of time to practise with the device while confined to his home in Airdrie, north of Calgary, during the COVID-19 lockdown.

“It's still a work in progress but it's getting better than it was,” Straschnitzki says.

Straschnitzki, 21, was hurt when a semi-trailer and the Broncos team bus collided at a rural intersection in Saskatchewan in April 2018. Sixteen people were killed and 13 were injured. The truck driver pleaded guilty to dangerous driving causing death and was sentenced to eight years in prison.

Since the crash, Straschnitzki has made it his goal to make the national sledge team and eventually represent Canada at the Olympics. He was scheduled to be a member of Team Alberta at the national championships this spring.

That was before the pandemic hit.

“Not being on the ice for four months now is the hardest part for me. That was my escape and I used that for everything,” he says.

“The physical activity was a place to stress relieve, so it's been tough and I'm just waiting for the rinks to open again.”

Straschnitzki says fortunately the epidural stimulator is mostly about muscle memory and all the programs he used before the pandemic are still intact.

He's hoping to improve his range of motion throughout the summer.

“I want to get stronger, get more muscle contractions throughout my whole body and hopefully get more muscles moving that weren't moving before,” he says.

“I think Ryan has done a lot on his own to maintain what he had gained when he was back and I'm hoping this will just be a slight bump in the road and he'll be able to continue on without too much regression at all with his therapy,” she says.

“I think Ryan has done a great job in maintaining all his gains that it was just a few days of hurt and he's back and ready to go.”

This report by The Canadian Press was first published June 29, 2020.