Alberta's premier is coming under fire for comments she made online about Russia's invasion of Ukraine a few months before getting the province's top job.

In a livestream on Locals.com on April 29, Premier Danielle Smith asked about her thoughts on the "peace plan for Ukraine, Russia."

She answered by giving a hypothetical where Canada has nuclear weapons and is aligned with Russia, and how that would upset the U.S.

"So, why would we be surprised if Russia is upset because Ukraine has nuclear weapons and is aligned with the United States?" she said in the livestream.

"I think the only answer for Ukraine is neutrality."

Other posts from Smith on Locals.com are also coming to the forefront, first brought to light on Friday by independent journalist Justin Ling.

In a post on Feb. 24, Smith asked if areas of Ukraine should be allowed to break away and govern themselves independently if they want.

"It seems to me the great powers of the world did a terrible job defining the new borders of countries after WWII. So much of the conflict we have had since is due to different people being crammed under one national government that don't like each other," the post said. 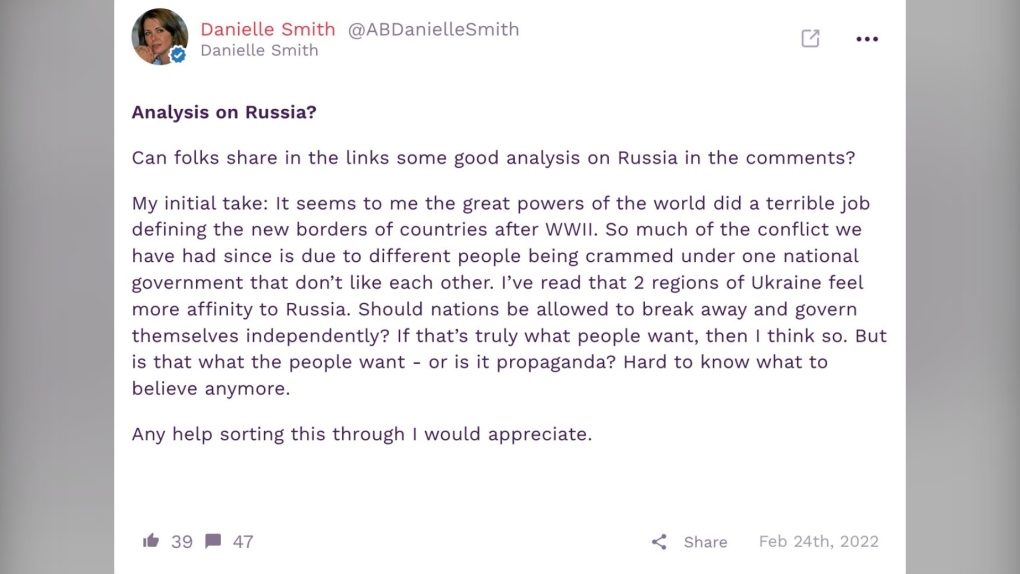 'I WAS TAKEN ABACK'

Bohdan Romaniuk, board member with the Canada-Ukraine Foundation and a long-time Ukrainian community activist, calls the comments deeply disturbing and misinformed.

"To be honest, I was taken aback," he told CTV News.

"With all due respect to our new premier, they demonstrate a profound ignorance of history."

Romaniuk said her comments don't acknowledge the Budapest Memorandum signed by Ukraine, the U.S., Britain and Russia, assuring Ukraine its independence, sovereignty and security in exchange for giving up the third largest arsenal of nuclear weapons in the world.

"I do not know what else a country could have done to demonstrate its intention to live peacefully, neutrally, and pose no danger to the Russian Federation. And yet, here we have Putin invading Ukraine," he said.

In a March 2 post that has since been removed, Smith linked to an article from Global Research, a website criticized for promoting disinformation from Russia. 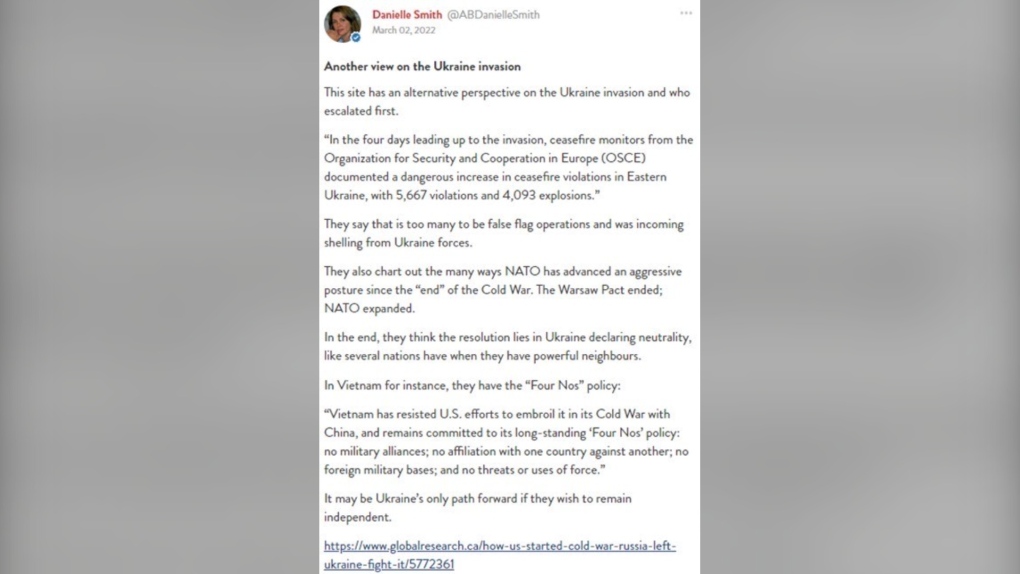 The article appears to imply Ukraine and NATO showed signs of aggression leading up to Russia's invasion.

"It meshes perfectly with Russian propaganda. Two, it validates the proposition that might is right and three, it denies agency to countries located next to nuclear power and four, it throws gasoline on the, I'll call it 'the fires of nuclearization,'" Romaniuk said.

Another no longer visible post from March 12, linked to a report from Fox News' Tucker Carlson, questioning if the U.S. had been funding biolabs in Ukraine.

"Our governments are becoming increasingly untrustworthy and it's getting dangerous for all of us. He asks some good questions. Where are the grownups to answer them truthfully?" Smith said in the post. 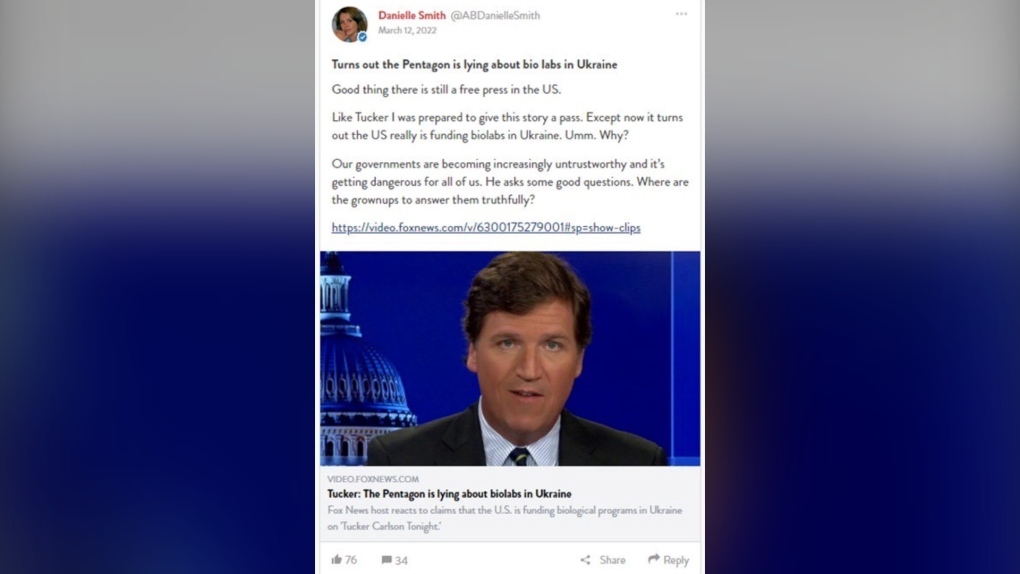 'EVERY ALBERTAN SHOULD BE OFFENDED'

He worries about what effect it will have on Alberta's large Ukrainian population and the Ukrainian refugees who are resettling here.

"Here we have an elected official in Canada, casting doubt and questioning the motives, questioning who provoked the war … It demoralizes all of us," he said.

"We have been pulling really strong behind Ukraine, and to have someone do this, these are not musings just for the sake of academic debate, she's doing this on purpose."

"What is troublesome is that in a public forum, she claims that she supports Ukraine and then when we get into the dark web, into websites where we have to actually pay to see her comments, you see something totally opposite, pandering to conspiracy theorists and actually becoming a spokesperson for Putin's propaganda," he said.

"I'm offended as an Albertan. I think every Albertan should be offended."

In a statement on Sunday, Smith reiterated that she has Ukrainian roots, going back to her great-grandfather.

"My Ukrainian heritage is something I deeply cherish and value. My political beliefs are largely born out of a complete distrust of the socialism from which my great-grandfather fled," she said in the statement.

Smith also said she recognizes the suffering Ukrainians are experiencing.

"I hope and pray that all world leaders, including those involved directly in the conflict will do everything possible to deescalate and spare millions of Ukrainian lives. Achieving peace is my greatest concern for Ukraine," the statement said.

Smith went on to outline what Albertans could do to help Ukrainians fleeing the war.

She ended her statement saying, "I have and always will stand with the Ukrainian people."

Yesterday’s attempted politicization of the Russian invasion of Ukraine by Rachel Notley’s NDP and their allies is offensive and inappropriate. /1#cdnpoli #abpoli #ableg pic.twitter.com/2LcGhgqInu

The Ukrainian Canadian Congress held a rally in Calgary on Sunday at Poppy Plaza.

Stephania Romaniuk, one of the organizers, believes Smith's support of Ukrainians is sincere, but said her response to the comments she made earlier this year doesn't go far enough.

"This is 100 per cent the Kremlin narrative and it's simply unacceptable," she said.

"It would be helpful if she retracted her earlier statement and perhaps had an opportunity to debrief with some members of the Ukrainian community to help paint a clearer picture of eastern European history."