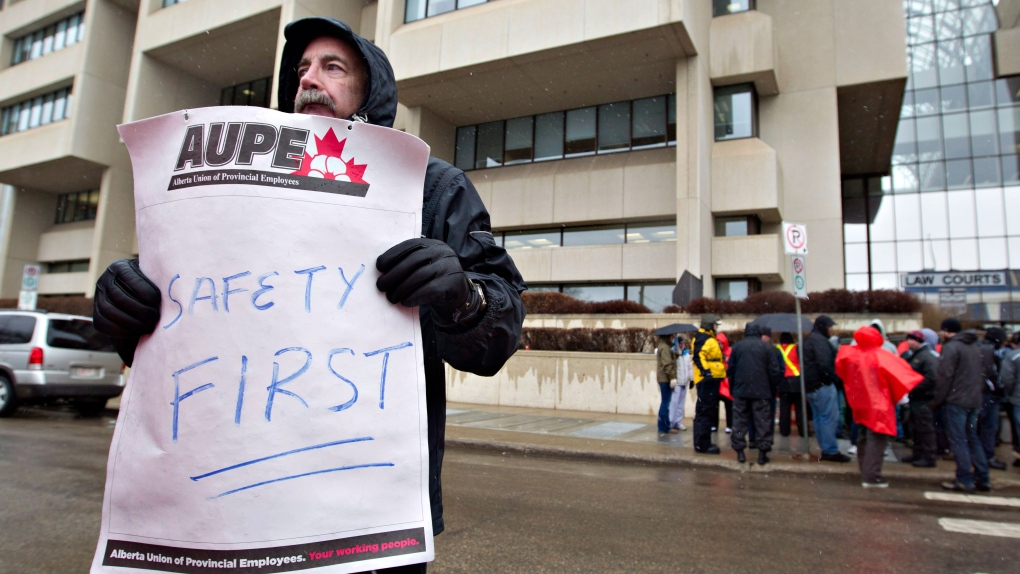 Alberta sheriffs take part in a strike as they joined correction guards, setting up a picket line outside the Edmonton courthouse in Edmonton, Alberta on Monday, April 29, 2013. (Jason Franson / THE CANADIAN PRESS)

The Kenney government's Bill 1, better known as the Critical Infrastructure Defence Act, violates Albertans' rights to protest on public property, says one of the province's largest labour unions, and that's why it is forging ahead with a legal challenge.

The Alberta Union of Public Employees (AUPE) first challenged Bill 1 in June 2020, saying it breached an individuals' Charter rights and would impact the union's ability to "engage in the collective bargaining process."

It cited the example that if they are protesting or handling out leaflets on a sidewalk, they could potentially be breaking the law.

The Alberta Court of Appeal dismissed the AUPE's claims in December, but now the union says it is seeking a decision from the Supreme Court of Canada on the law.

"AUPE believes that peaceful protesting is a cornerstone of our democracy and that the aim of the government is to use Critical Infrastructure Defence Act to silence opposition to its policies," said Patrick Nugent, counsel for the AUPE in a release.

It also said the Court of Appeal erred when it said the challenge was based on hypotheticals, that the AUPE had no ability to challenge charges made under Bill 1 and it "applied the wrong test" in striking the claim. 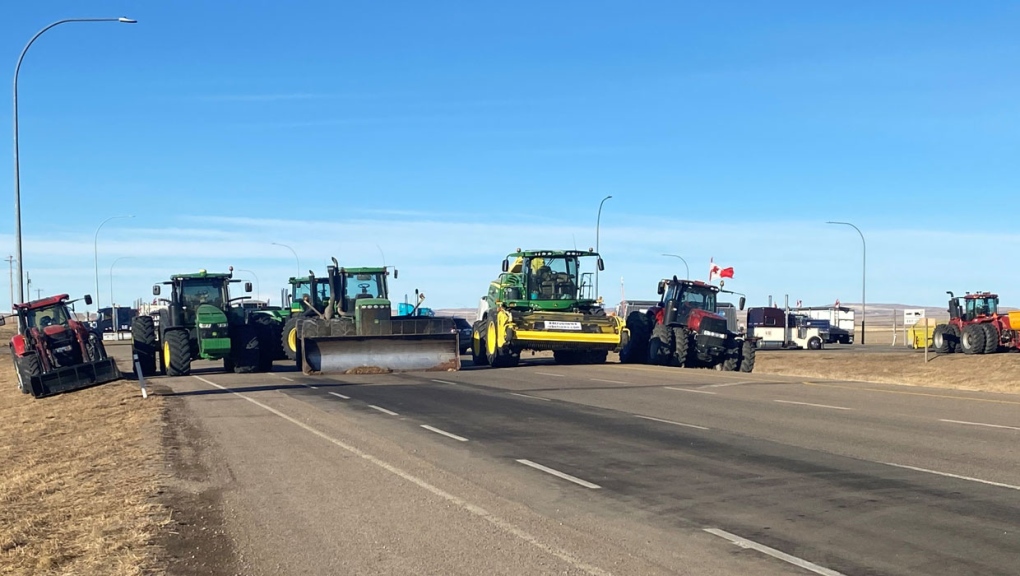 Trucks are again backing up at the Alberta-US border after a number of farm vehicles, as shown here, are blocking Highway 4 to the Coutts, Alberta border crossing on Wednesday Feb. 9, 2022. THE CANADIAN PRESS/Bill Graveland

BILL 1 NOT USED TO SHUT DOWN COUTTS PROTESTS

While the union says the provincial government has used Bill 1 as a threat against environmental protests and labour disputes, it has failed to effectively use it to put an end to the ongoing protest in Coutts.

That protest, which is largely against vaccine mandates and other public health restrictions put into place because of the COVID-19 pandemic, is now into its 14th day.

While some members of the demonstration have been ticketed, there is no sign of the protesters dispersing anytime soon.

AUPE president Guy Smith says that means the provincial government is picking and choosing when and where it is applying the statutes of the Critical Infrastructure Defence Act.

"The fact that the government and police waited so long to charge anyone under Bill 1 during the border protests at Coutts and aren’t using the Act to shut down the protests entirely suggests that this will be a law that is imposed only on those with whom the government does not agree," he said in a statement.

Alberta's Official Opposition says the contrast between what the UCP government said when it introduced Bill 1 in 2020 and its refusal to use it now is "striking".

"Alberta’s NDP continues to oppose the Critical Infrastructure Defence Act, which provides the government with unreasonable abilities to infringe on Albertans’ freedom of speech," said Irfan Sabir, the NDP justice critic, in a statement to CTV News.

"Alberta’s NDP has called on the UCP to apply for a court injunction to disperse this illegal blockade, which has halted $44 million of daily trade between Alberta and the U.S., and to use their authority over commercial operators’ licences."

ENFORCEMENT DECISIONS ARE MADE BY POLICE

The Alberta government, in response to a request for comment from CTV News in regards to the renewed legal challenge, said it looked forward to defending the "baseless claims" made by the AUPE.

"Constitutional rights, such as those of free assembly, have been found by courts to have reasonable limits," said Alex Puddifant, press secretary for the acting minister of Justice and Solicitor General. "The blocking of critical infrastructure is unacceptable, and we believe that the Supreme Court of Canada will agree that the AUPE claim is without merit."

Puddifant said that enforcement decisions remain with law enforcement officials, including which charges to file and when.

"This applies in all situations, including the Coutts border blockade."