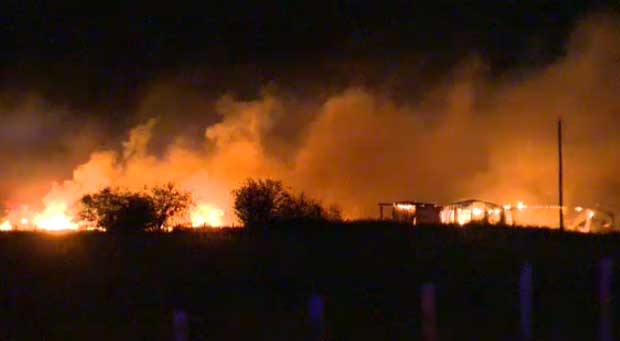 A huge blaze at a turkey farm east of Chestermere lit up the sky on early Monday morning.

Investigators now believe that the fire that blazed through a turkey farm east of Calgary early Monday morning may have been set deliberately.

Rocky View fire crews were called to the rural property just east of Chestermere after 1 a.m. on Monday morning.

By the time crews got there, the flames could be seen from Highway 1.

There were a number of outbuildings, barns, and homes on the property at the time of the fire.

They were all unhabited and no one was hurt or killed in the fire, which took hours to finally extinguish.

According to the Strathmore RCMP, four barns, one house, and some outbuildings were destroyed due to the fire.

The Strathmore RCMP is working closely with the Calgary RCMP General Investigation Section, the Provincial Fire Investigator, and Rocky View Fire Department to determine the cause of the fire.