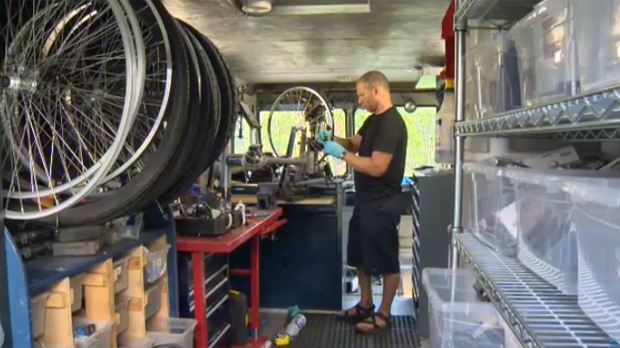 The owner of Joe’s Garage, a bike shop normally situated along the Bow River pathway, is seeing an increase in demand for his services.

“From my vantage point, I spend most of my day with my head over a bike so I might miss the day-to-day details, but it feels to me like there are more people using the paths and commuting by bike,” said Joe Nunn.

“Because it’s so expensive to park downtown and it can be so frustrating getting in and out of downtown in a car, I think some people are seeing (cycling) as a much lower stress way to travel,” explains Nunn.

The former bike messenger opened his mobile shop nine seasons ago after years of searching for a sustainable premise for a temporary repair business.

“I started to think about ways of running a shop that was low enough overhead that it wouldn’t be a problem to do it just part of a year,” explains Nunn. “In most of Canada, the nature of the bike season, at least the bike repair season, is five to seven months.”

A number of commuters and bike couriers, including Marcus Michel, have made the most of Joe’s Garage temporary, but reliable, location on the south side of the Bow River near the intersection of 8 Street and 3 Avenue Southwest.

“Having Joe on the pathway is a total lifesaver,” said Michel. “Most of the stores don’t open until 10 and our problems with our bikes don’t always happen when the stores are open.”

“It would be nice if he was out here in the winter too but I don’t think his vehicle is insulated for that kind of weather,” laughs Michel.

“I bike in everyday so I know he’s here and it’s convenient to get my bike fixed rather than having to find a bike shop somewhere in town,” said Dave Roberts, whose morning commute was slowed by a flat tire.”

Nunn says he sees room in the industry for more mobile and traditional bike repair shops as he expects Calgary’s love for bicycles will continue to grow.

With files from CTV's Kevin Green