A Calgary couple was shocked to find their home in the community of Sage Hill completely destroyed after renting it out on a popular online rental site on the weekend.

Mark and Star King listed their Sage Hill home on Airbnb for rent to help build up their equity and were contacted by a renter who wanted to use the home from Saturday to Tuesday.

“We use Airbnb when we travel, we love it, it’s a great website, vacation rental by owner type website and my parents are out of town so we were going to go and stay at their house and we get an offer to rent out our house for three days for a family coming for a wedding, it’s going to be four older adults, go through the house rules, they shook my hand,” said Mark.

“The guy met us at 7 o’clock and we gave him a really quick run-through of our house rules which included, no smoking, noise control, it’s a family-friendly neighbourhood, and we had some signs where we didn’t want them, some personal storage areas. He was in a little bit of a rush to get the keys and go but that was okay because I think he was headed to a game, so it all seemed pretty normal,” said Star.

Mark says a party bus showed up at the home, at 152 Sage Valley Drive N.W., within hours of handing over the keys.

“The neighbours report a party bus and upwards of 100 people in our house and after two days of this, we were unaware, finally a neighbour texts me and says, are you guys okay? This is out of the ordinary for you guys and there’s been police at your house a lot, are you okay?” said Mark.

He says he called the police and then went to the home to see what was going on.

“The police were here before we got here,” he said. “They had been here seven times, with no cooperation from the people that were in here that had had a party for two nights and all day in between.”

Star says she asked police to escort her to the door and that she then begged some of the people who answered to please leave her home.

“I literally begged the girl, would you please come out and talk to us, we’re not upset at you, if you would just please open the door,” said Star. “I just wanted them to leave. I wasn’t angry or upset, I just wanted them out of my home so we could have our place back.”

“After about an hour of that, they finally called taxi cabs and slowly evacuated,” said Mark.

The King’s entered the home with police and were shocked to find the renters had ransacked the place.

“We were almost knocked over by the fumes, the smell. My first feeling was shock, I couldn’t process it and I’m trying to take it all in. I mean this is our home, this is our sanctuary, we’ve got a five-year-old and a one-year-old and the sense of violation, the lie that was told, and the trust that I had in somebody and this happens, it was just beyond my imagination,” said Mark. “When we came in, one of the police said this isn’t a party, this was a drug induced orgy and we knew there was drugs involved, of course the smell of liquor and marijuana.”

The home in now unlivable and the King’s have been told they will need a hazardous materials team to clear it out.

“The drugs, the sex, everything imaginable that would violate a home, has happened here. We don’t want to touch anything. We can’t sleep in these beds again, we can’t walk on these carpets in bare feet, ever again. There’s broken glass everywhere, there’s barbeque sauce on the ceiling, there’s mayonnaise covering our sofa cushions that are piled on the couch, piles of garbage, the floor has a film of all sorts of fluid and gook. Everything’s contaminated.”

“In my nine years of policing, I’ve never seen anything like it. Especially to a house that you rent over a weekend,” said CPS Constable Attila Horvath. “15 to 20 people at least, left the house after we were there.”

The Kings say Airbnb has been very cooperative and that the company has a $1M fund to take care of damage at host properties.

“So far they’ve been very helpful, so we’re counting on them to come through and restore our lives,” said King.

Horvath says they are looking to speak to the person who rented the home and have consulted with the Crown about charges.

“With a rental property there is an expectation of wear and tear but this is way beyond that so the Crown prosecutor is supporting a charge of mischief to property over $5000,” said Horvath.

The Kings are staying at Mark’s parent’s house for now and say AirBnB has also offered another home for them to use until things get sorted out. 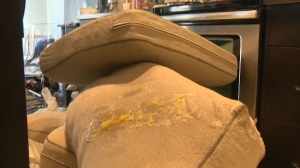 Photos show the damage to a rented Sage Hill home