CALGARY -- Sewing protective masks for the community is helping a Calgary woman spread hope in the wake of her mother’s death from the coronavirus.

Rose-Ann Normandeau’s 85-year-old mother, Anna Neal, was the first resident of the McKenzie Towne Continuing Care Centre to pass away from COVID-19. Normandeau decided to pay tribute to her by helping protect others.

"I think she would be happy," said Normandeau. "That’s how I learned to sew, is from my mom."

"When we were young we were very poor and so she sewed all of our clothes."

Normandeau and her husband Randy co-own Normandeau Window Coverings, so they had equipment and cotton fabric readily available.

A whole team has been making masks in Neal’s memory.

Normandeau’s sister Gayle Neal and her daughter Sarah Abdul also joined in, along with staff members from Normandeau's business and several friends. All of them have helped create and drop off nearly 500 masks to community members, for free.

"We’re trying to get as many done because the demand has been so big," said Normandeau. 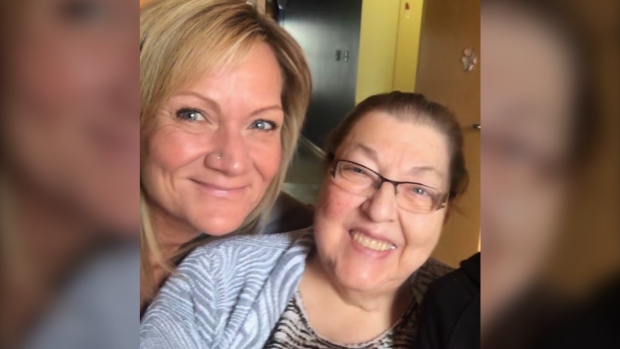 The group is now trying to find more material so they can continue.

The masks are two layers thick, pleated and machine-washable. They are not medical grade but health officials have said face coverings can help people running errands prevent the spread of the virus.

Neal’s family had a graveside service on April 17 and plan to have a large celebration of life once restrictions on gatherings are lifted.

Normandeau said her mother passed away within days of getting sick.

"We never got to say goodbye. She was alone," she said.

The care home’s management company, Revera, issued a public statement saying Neal developed symptoms on March 22 and died the following day. Her family said symptoms started March 20, and Neal made a frantic call to her family saying she was having trouble breathing.

"I don’t know if they realized how fast it spread and what the implications were," said Normandeau. "People should have been isolated a lot sooner."

Neal's family has chosen to focus on positivity instead and they are continuing her spirit of giving.

"My dad and her were always volunteering, being part of the community," she said. "This is something I can do, and do for the community, and it feels good to be able to give back."

Normandeau is also giving back by passing along the sewing skills her mother taught her daughters.

"Some of my friends’ daughters are doing it and we’re like, this is a dying art. You’re going to have a skill that nobody else in your generation is going to have."