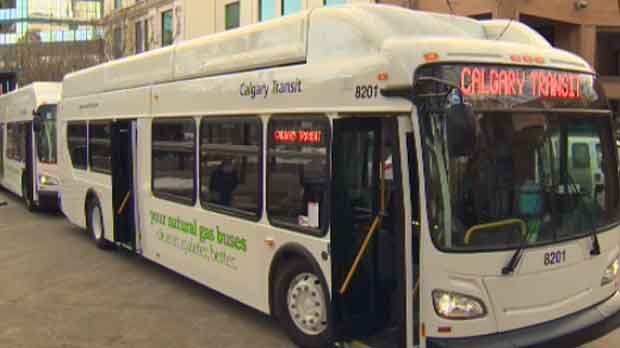 The city is testing out a total of four natural gas buses as part of a transit pilot project.

The city rolled out two brand new natural gas powered buses as part of a pilot project on Monday.

The Mayor and Calgary Transit officials were down on the Stephen Avenue Walk to unveil two new buses to the public.

The buses will be put into service starting on Tuesday and transit will take delivery of two more CNG buses in May.

“Natural gas as a fuel is particularly cheap as opposed to diesel. Environmentally, it’s a pretty green fuel compared to some of our older diesel buses we run right now. And from a social point of view, these buses are pretty quiet compared to our regular buses,” said Russell Davies, Manager of Transit Fleet for the City of Calgary.

Russell says the new busses are about 10 times quieter, when idling, than a regular diesel bus.

The buses were purchased from two companies in Winnipeg and Montreal and will run for the next 12 – 18 months so transit can see how they perform in our diverse weather conditions.

Russell says the city has struck a deal with a local station to gas up the buses.

“The natural gas is around 65 or 66 cents a litre equivalent, while the diesel price right now that we pay is around $1.03, so you can see already there’s around a 30 percent saving just on a non-volume, bulk, kind of purchase,” said Russell.

Russell says that the city is in the process of creating a provisional design for a new CNG bus facility and will replace retiring buses with new CNG buses down the road.

Edmonton is currently running a similar pilot project and the two cities are sharing the data they gather.

For more information, visit the City of Calgary website.