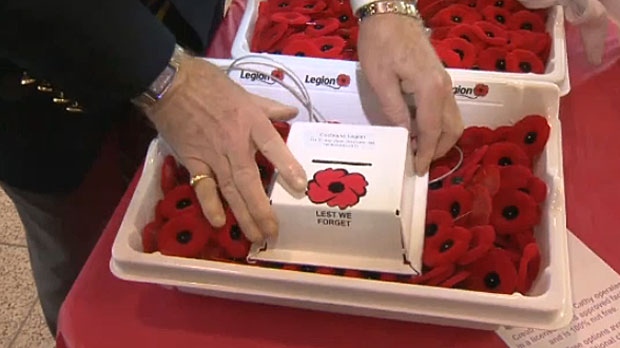 Calgary businessman Dan Kroffat's poppy box design is made out of metal and can be attached to a store counter to help prevent theft.

Every year, police are called to investigate the theft of poppy donation boxes at businesses throughout the city but one man from Cochrane says he has a solution that ensures those funds get to the people who need it.

Businessman Dan Kroffat redesigned the traditional poppy box in 2016, constructing it out of metal and adding an attachment that affixes the box to the counter.

He says the design should prevent spontaneous thefts that make up about 75 percent of rip-offs.

Kroffat tested the boxes at a number of businesses in Cochrane and says none of the boxes were taken.

The idea eventually drew the attention of his local MP who then arranged a meeting with Kent Hehr, the Minister of Veteran’s Affairs.

Kroffat hopes his design will become the standard across the country.

“Poppy boxes have become obsolete over the past 40 to 50 years in the way they are presented. So it's an excellent question. I thought somebody had to step forward and improve the situation and secure the boxes and we’ll eliminate spontaneous theft and then on top of it, it raises awareness because we are talking about veterans and their needs.”

He adds that there were also more donations made in the secure boxes. Donations in Cochrane rose from $32,000 in 2015 to almost $50,000 last year, Kroffat says.

Kroffat says that’s because donors feel their money is safer in the new boxes.