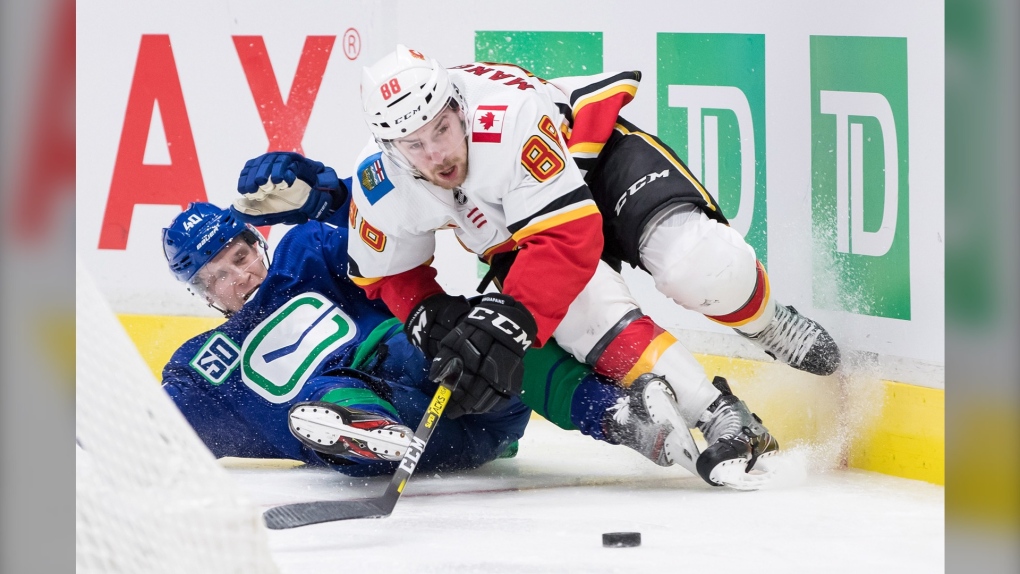 VANCOUVER -- It was a game that could have been over barely after it started.

The Calgary Flames found themselves trailing 1-0 after just 34 seconds, then got some momentum from a fight on the next faceoff and went on to hand the Vancouver Canucks a 6-2 loss Saturday night.

The Flames looked to be flickering when Tanner Pearson scored on Vancouver's first shot of the game. On the following faceoff Matthew Tkachuk dropped the gloves in a fight with Vancouver's J.T. Miller.

Calgary's Dillon Dube, who had a career-high three points, said the fight was like a shot of adrenaline.

“We were stunned,” said Dube, who had a goal and two assists. “Right away you see some heads drop, but when (Tkachuk) went out there every single guy was on the bench going crazy.

“I think it got our momentum going and said, `we're here for business,' so he was big for us.”

“He's competing, he cares,” said Ward. “He's trying to change the momentum in the hockey game and get our guys back on a good footing.

“He understands what impact he can have on the game.”

Tkachuk, who scored in the first period to give Calgary a 2-1 lead, said the win was a great way to start a four-game road trip after losing three straight at home.

“That was perfect for us to come out, be together again and get through this together against the top team in the Pacific (Division),” he said. “I thought we did a great job of responding tonight with the great team effort.” 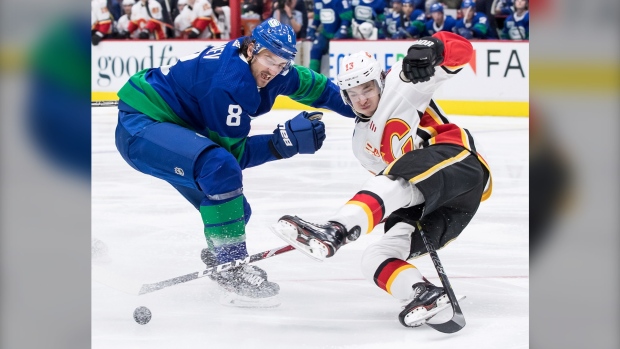 Milan Lucic and Derek Ryan each had a goal and assist for the Flames (28-22-6). Sean Monahan and Tobias Rieder, into an empty net, also had goals. Both Mikael Backlund and Johnny Gaudreau chipped in two assists.

Adam Gaudette scored the other goal for the Canucks (30-21-5) who saw a nine-game home-winning streak end.

Head coach Travis Green said the Canucks looked like a team still learning how to battle for a playoff spot. Vancouver has missed the playoffs in each of the last four seasons.

“I think tonight in a way they (Calgary) looked like a team that had been in this situation before,” said Green. “They looked like more the mature team.

The Canucks lost forward Brock Boeser in the third period after a collision with Calgary's Andrew Mangiapane. Boeser, who is Vancouver's third-leading scorer with 16 goals and 45 points, was seen later with his arm in a sling.

Green would only say Boeser “is going to be out. I don't know how long.”

Both Dube and Ryan scored goals for Calgary on plays where Markstrom was screened and didn't see the shot.

Pearson said the Canucks need to do a better job clearing the net in front of Markstrom.

“He gave us a chance to win that hockey game,” said Pearson. “We have to help him when he's doing that. That one is on us.”

“It was a huge game,” he said. “I have to come up with some stops and help our team.

Pearson said the Canucks let the Flames dictate the game.

“I think we got a bit too much into a track meet with that team,” he said. “That's the kind of game they wanted. That doesn't give us success.

“We have to get back to the way we play and nip this losing streak in the bud.”

This report by The Canadian Press was first published Feb. 8, 2020.