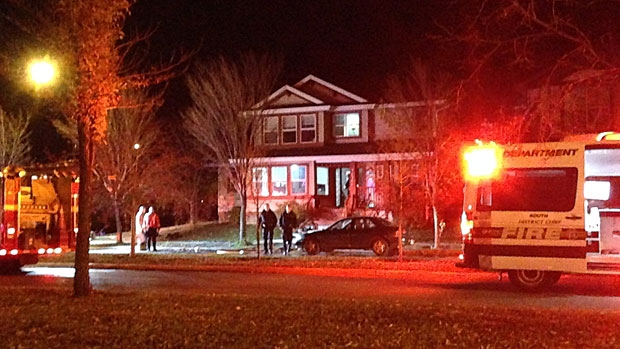 Three adults and five children escaped a early morning house fire in southeast Calgary on October 15, 2014. Officials are urging all residents to ensure their homes have functional smoke detectors.

Three adults and five children are lucky to have escaped an early morning house fire in southeast Calgary without injury, despite not having functional smoke detectors, fire officials say.

When crews got there, they spotted smoke and flames on the second floor of the home.

Three adults and five children, the occupants of the home, were all outside when crews arrived.

One man was transported to hospital in non-life-threatening condition while the other occupants were not injured.

Fire investigators remain at the scene to determine a cause of the blaze.

Officials say the home did not have working smoke detectors and urge all Calgarians to ensure they have the correct number of alarms in their homes.

The CFD says the typical home requires an alarm in every sleeping room, outside each sleeping area, and on every level of the home.