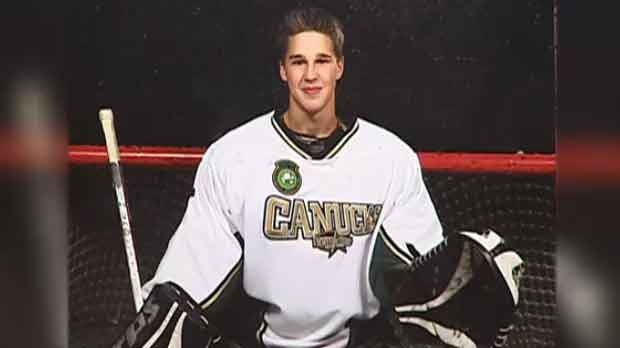 A Calgary man goes on trial next week accused in the death of another young man in a fatal crash two years ago.

Travis Meissinger was killed in a collision on Dover Ridge Dr. S.E. on January 22, 2011.

Chris Fitzsimons was at the wheel when he lost control of the vehicle and crashed into several parked cars along the street.

Meissinger, 20, was a passenger in the vehicle and died at the scene.

Meissinger was well liked, a gifted athlete and goaltender on his Junior B team.

Ken and Dana Meissinger, Travis’ parents, are getting ready for the trial now and say they will attend everyday of the trial even though it won’t be easy to sit and listen to what happened that night.

“You deal, day by day and you always wake up going ya, the nightmare is going to be over and it’s never over. You just hope for the best and hope that one day will be easier than the next,” said Dana Meissinger.

The Meissingers want justice for their son and also want others to get the message that the price for drinking and driving can be a hefty one.

“Right now, you look at other cases they get two years, three years and they should have a minimum sentence of five years. None of this two year stuff. Five years and up,” said Ken.

“Just to go and get through this and hopefully show people if you cause this tragedy to a family there’s some consequences and not a slap on the wrist like so many have got in past,” said Dana.

Many of Travis’ friends will also be in court during the trial to help the Meissingers get through it.

The trial at the Calgary Courts Centre is scheduled to last five days and so far Fitzsimmons’ lawyers have opted to be tried by judge and jury.