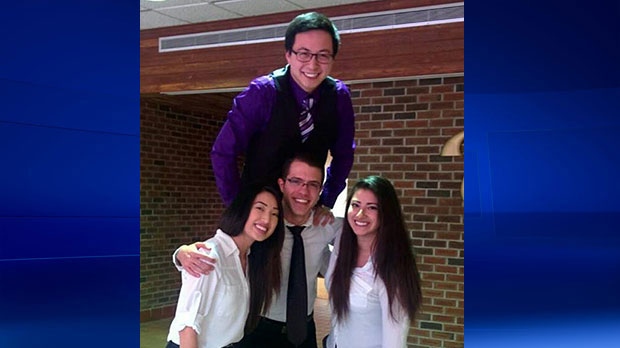 Sammy El-rafih, Anisha Sharma, Steven Kwan and Sarah Nhung were injured when a truck collided with their taxi in Las Vegas.

A Las Vegas resident is facing charges in a crash that injured four SAIT students on Wednesday night.

The crash happened at about 9:05 local time on Dean Martin Drive, west of the strip.

Las Vegas police say a semi tractor-trailer unit was travelling southbound on the roadway when it entered the two-way turn lane and headed into the northbound lane.

A Dodge Caravan taxi that was travelling in the northbound lane swerved to the left to try and miss the truck and also entered the two-way lane where it was hit head-on by the semi.

The truck ended up in the parking lot of an industrial complex and the driver fled the scene on foot.

The occupants of the van were all taken to UMC Trauma in Las Vegas.

The four passengers are all from Calgary and suffered a range of injuries:

The 45-year-old driver of the taxi was treated for minor injuries.

Witnesses directed police to the suspect and he was then taken into custody.

Police say he failed field sobriety tests and was arrested for suspicion of DUI-Liquor and Felony Hit and Run.

Bernard Tropp, 44, is in custody in Clark County Detention Centre on the charges and police continue to investigate.