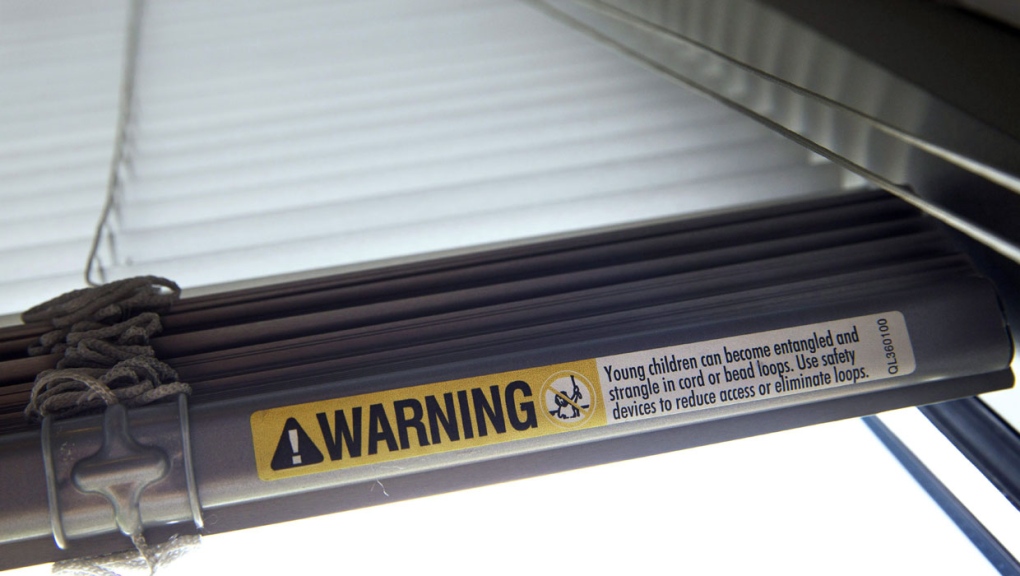 This Wednesday, May 6, 2015 file photo shows a warning label of strangulation risks from mini blind cords in Washington. Starting May 1, Health Canada will be enforcing new rules on corded window blinds being sold by Canadian retailers. (AP Photo/Jacquelyn Martin)

Starting next month, businesses that sell corded window blinds will need to abide by Health Canada regulations aimed at preventing injuries to children.

However, the rules came into effect last year and some businesses are concerned about the confusion it's causing for customers looking to buy window coverings for their homes.

On May 1, 2021, Health Canada reduced the length of cords allowed on window blinds to 22 centimetres and the perimeters of loops created by reachable cords to 44 centimetres.

The reason for the change is to prevent situations where children become tangled in the long cords – incidents that can lead to life-altering injuries and even death.

While Health Canada changed the regulations a year ago, the agency says it will now be conducting inspections starting on Sunday to ensure businesses that sell window blinds are in compliance with the new rules.

"What's most concerning about corded window coverings is that they present very significant strangulation risk to small children. Children, without realizing what they're doing, can very easily become tangled and, generally it's their necks that become tangled in corded window coverings if cords are too long," she told CTV News in an interview Friday.

Simonelli says these types of injuries are not very common, but data shows that corded blinds are the cause of death for at least one child each year in Canada.

"However, I find that that statistic significantly underestimates the risk," she said.

"Anecdotally, I know at the Alberta Children's Hospital, approximately every three years we have a child who comes to the emergency department having suffered one of these injuries.

"Often the injuries are fatal or are devastating injuries that result in significant, life-altering injuries."

She says when children become caught in a window cord, parents often have little warning that something is happening.

"What families need to know and be aware of is that children can go unconscious within 15 to 20 seconds of being strangled by a blind cord. Once they're unconscious, they don't make any noise at all – so this can happen extremely quickly and extremely quietly."

While businesses that deal in window coverings and custom blinds are 100 per cent on board with the new regulations, some have questions about why Health Canada hasn't made the information more widely known.

"It's been a difficult transition," said Ashley Derrington, who works with custom builder Calgary Window Fashions.

"From 2021, there was no doubt about it that the industry was pivoting into non-corded window covering for safety and I think everyone in the industry can get behind something like that."

Derrington says the change "has come so hard and fast" that when customers come into the showroom, they aren't aware of it.

"We get a ton of people coming in that are looking to purchase window coverings and what they want is now against the law. It definitely poses some difficulties."

She adds customers often aren't believing what retailers are saying about the new regulations either.

"The customer doesn't believe us because Health Canada has done nothing to make it a little bit more out there. So, they go down the street and try to get it from somebody else and, obviously, with it being the law there is no option to do that now."

The new regulations have affected their product line, Derrington says, preventing the sale of more popular items like the top-down, bottom-up blind coverings and even powered window blinds that open and shut on demand.

Customers are also needing to reach deeper in their pockets if the windows they need to cover are larger than what the current cordless options can handle.

"Now, the customer has to either go to the expense of a drapery or use some sort of paper product on their windows. They are just really limiting what the customer is able to purchase from us," Derrington said. 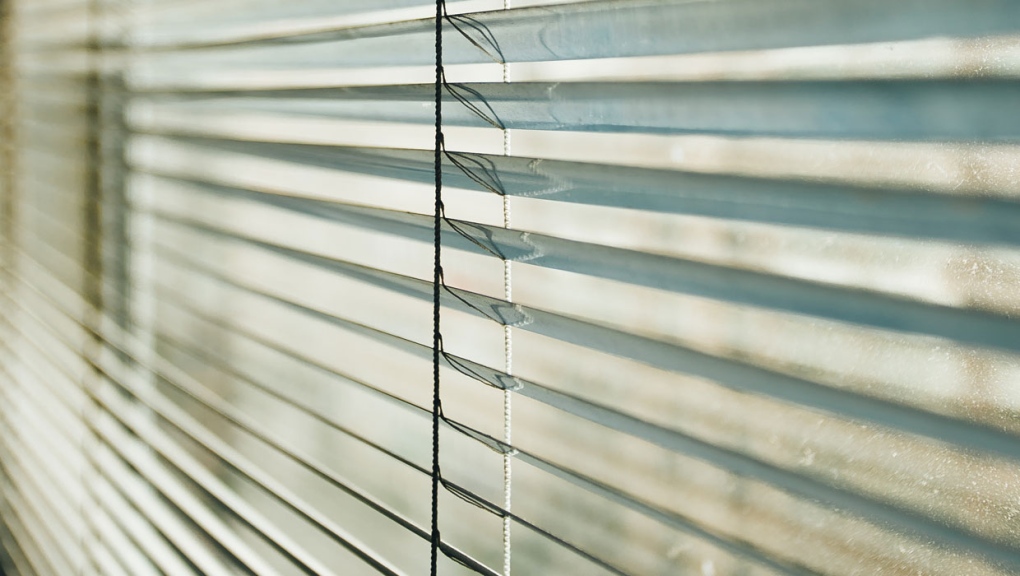 WHAT RESIDENTS CAN DO

Of course, the most straightforward option for homeowners would be to replace their window coverings with cordless options or new blinds that comply with the new regulations.

However, Simonelli says they know that's not possible for many Canadian families.

"I think the most important thing, first of all, is to just take a look. Once people are aware this is a problem, they can take an inventory of the windows in their house and see where this is an issue."

Once that's done, homeowners can install cord cleats, which are simple hooks installed next to the window that the cord and be wrapped around to keep it out of the reach of children.

"Other things people can do is families can avoid putting any furniture underneath a window that has corded window coverings. You don't want cribs or playpens underneath them," Simonelli said.

Derrington says they always help instruct customers on safety when they're installing blinds in homes.

"It is always important to be educating the customer to ensure they're doing things like securing it with a cord cleat or finding other ways to anchor it and making sure it is inaccessible to a child or a pet."

Education is key to solving the issue of corded blinds, but one U.S. company is offering a households an incentive to learn more about what's changing and how to keep their children safe.

Norman Child Safety, a California-based company, is offering one set of free window coverings to every household in the U.S. and Canada. It's part of the same decision made by the Window Covering Safety Council that found only cordless window coverings or window coverings with inaccessible cords can be used in homes with young children.

Families with at least one child under the age of eight can apply online for one set of honeycomb blinds up to 182.8 centimetres (72 inches) wide and 213.3 centimetres (84 inches) high.

The company tells CTV News it originally had a goal of giving away 10,000 free sets of blinds per month, but when it began the initiative in March, it received 40,000 applications for blinds.

"A lot of parents were really surprised that there's absolutely no strings attached," said Susan Huang, Norman's marketing manager, in an email to CTV News. "We don't even ask them to pay for shipping and handling."

The company says there is no limit to the number of blinds it will be delivering during the campaign, which will run until the end of this year. Norman says it wants to promote awareness of the issue and make all Canadian and U.S. homes safe for children.

While the offer is only good for one free set of blinds, additional products can be purchased from participating Norman retailers, including Budget Blinds.

When Health Canada first introduced the regulations a year ago, Simonelli says the agency would be working with affected businesses to ensure they knew about what was happening.

She says she understands that it's difficult for companies to adapt to big changes like these.

"In the COVID environment and to allow businesses to adapt, (Health Canada) has focused on educating people for the past year and, effective May 1, 2022, they're moving towards more enforcement," she said.

Simonelli says Health Canada is still trying to give businesses time to work through them "without giving a prolonged window" for more illegal and unsafe corded blinds being installed in Canadian homes. 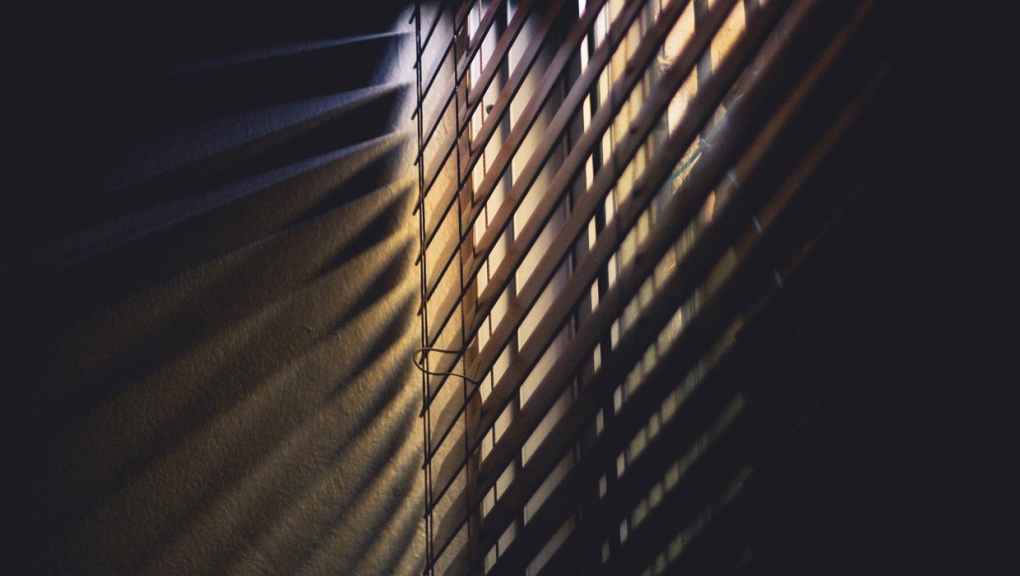 Derrington says she hasn't spoken with Health Canada herself, but one of the owners of Calgary Window Blinds has had contact with the agency.

She says that communication has led them to spend thousands to redo their showroom, which they found was not compliant with the new regulations.

"There's been so much gray area about what's allowed to be sold and what's not, so I think that's primarily the conversations that she's had with Health Canada. Trying to make sure that we're on the right side of the law because things have been wishy-washy."

Derrington says the new changes are also expected to create further problems down the road, especially when it comes to new homes and buildings that were designed years ago, with windows too large to be covered by cordless window coverings.

"Now, suppliers are having difficulty with what kind of product to supply that type of thing because it's something we cannot do any longer. It's just a lot of change in a very short period."