Landmark performances by Calgary Philharmonic to be showcased online 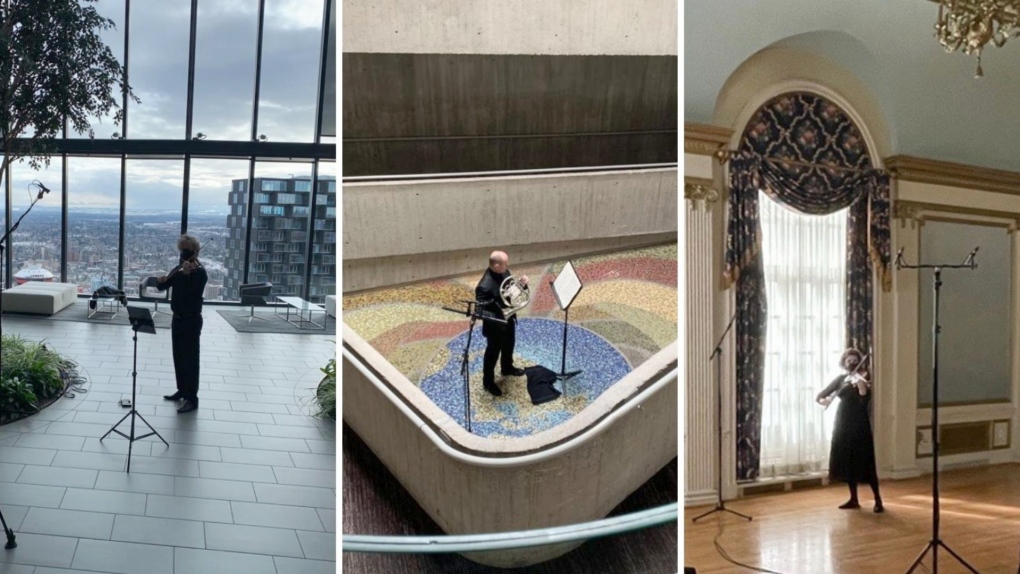 CALGARY -- With the Jack Singer Concert Hall closed, Calgary Philharmonic musicians have been recording virtual solo and duet performances at downtown landmarks that will be available online.

The concerts will be broadcast as part of three online City Space shows starting March 20.

Performances were done "from the top of a modern skyscraper, the stunning interior of a brutalist-era art gallery, and the grand ballroom of a historic hotel," read a release, and will be followed by short conversations about the music, paired with curated selections from the Calgary Phil Live-stream Library.

“We’ve really missed being able to make music in our concert hall, but it gave us a chance to explore some other beautiful spaces in this city,” says Paul Dornian, president and CEO of the Calgary Philharmonic.

“We’re excited to shine a spotlight on our musicians and give audiences a view from inside such familiar Calgary landmarks. We’re also sharing some excellent selections from past live-streamed performances that showcase the full orchestra.”

With the province moving fully into Phase 2 of reopening this week, Dornian hopes the orchestra will be able to return to the concert hall and start rehearsing with larger ensembles.

“One way or another, we will find ways to deliver music to our community — people have told us how much it means to them and how much they need it right now. Music has helped bring us all comfort and joy during this difficult year," he said.

"People are invited to take in the view from one of the city’s tallest buildings while listening to works by Sophie Carmen Eckhardt-Gramatté, Eugène Ysaÿe, Johann Sebastian Bach, and Heinrich Biber, followed by a brief discussion between Seidle and Associate Conductor Karl Hirzer," read a release.

"The second half of the event is an encore presentation of the first movement from Ludwig van Beethoven’s Symphony No. 1, which was performed by the Orchestra during the 2020/2021 season."

The performances are available for viewing for 30 days following the premiere — online access is free with registration. For more information can be found online.