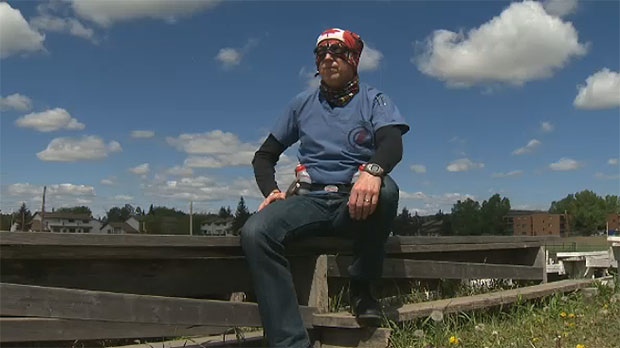 Martin Parnell has run hundreds of races and will suit up as Captain Clot-Buster for the Calgary Marathon on May 29, 2016.

Marathon runner Martin Parnell is making a comeback after suffering a blood clot on his brain just over a year ago and will lace up as his super-hero alter ego to take part in the Calgary Marathon this weekend.

Six years ago, Parnell started his “Quest for Kids” initiative and during that time he ran 250 marathons in one year and set five Guinness World Records.

He has been raising money for Right to Play, a charity that uses play based programming to teach children how to build life skills and better futures, and has raised over $1.3M for the organization over the years.

“The need never goes away. There are a lot of challenges as we know even locally with the oil situation and Fort McMurray and we have to help there but there’s an ongoing challenge with children, with underprivileged kids, kids that need help both locally and internationally,” said Parnell. “Very close to my heart, Right to Play, and especially now with the grand kids.”

In February 2015, Parnell was sidelined when doctors found a blood clot on his brain while he was on a business trip to Winnipeg.

“They put me into an induced coma for 24 hours and really my whole world changed right then,” he said.

His sneakers were set aside for about four months while he recovered and eventually he was able to start walking again.

“Right up front the specialist said, thank heavens you were reasonably fit because, actually the clot wouldn’t have killed you during the induced coma, it would have been organ failure so I’ll be honest, one take away was being fit is the best life insurance you can have,” said Parnell.

Last May, he walked the Calgary Marathon’s 5 km route and was ready to run again by mid-July.

In October 2015 he ran the Dash of Doom 10 km race and Captain Clot-Buster was born.

“So over the last several months I’ve done a 10 K, I did the policeman’s half marathon and now it’s time for the Captain’s very first marathon and so it’s going to be great,” he said. “I’m feeling pretty good. I saw the specialist a month ago, the clot is reduced by 95 percent and I’m still on some medication but it’s going really well. The support I’ve had both from my wife Sue and the community has been phenomenal.”

Captain Clot-Buster will run his first full marathon on May 29th and he says everyone is a super hero in their own way.

“When I look at the running that I’ve done in the past, many times it was to see how fast I could go to get a time or to give back through the charities but I’ve realized that fitness is the best medicine you can do, it beats anything and really that’s a big learning for me,” he said. “For me that’s huge. Keep fit, take a walk, go for a swim, ride a bike, walk the dog but do something, get moving.”

Captain Clot-Buster hopes to raise $1000 as an honorary athlete ambassador for Right to Play at the Calgary Marathon on Sunday.

For more information and to make a donation visit his website HERE.