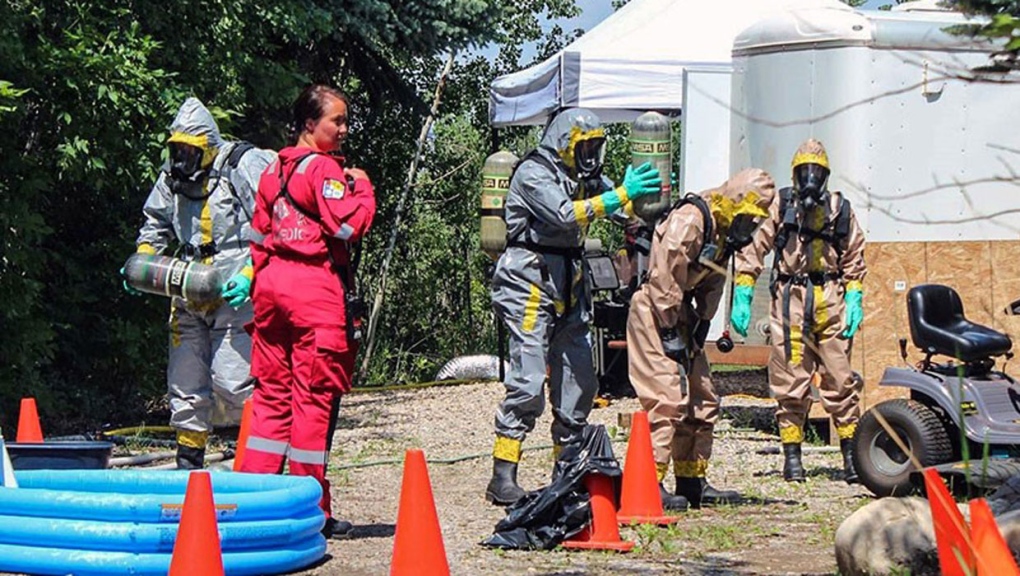 Members of ALERT searching a rural property south of Calgary in July that officials are calling a 'fentanyl superlab.' (Supplied/ALERT)
CALGARY -

The search of a suspected fentanyl 'superlab' in Alberta, as well as homes and businesses in both Calgary and Edmonton, has resulted in the seizure of an estimated $300 million worth of drugs.

According to the Alberta Law Enforcement Response Teams (ALERT), the Project Essence investigation into suspected drug trafficking led to the execution of 13 search warrants on July 7 at locations that included a suspected fentanyl lab in Aldersyde, roughly 20 kilometres south of Calgary.

A total of 31 kilograms of fentanyl and precursors were seized during the searches as well as 7,600 kg of chemicals for fentanyl production

ALERT says a kilogram of fentanyl equates to a million doses and the estimated street value of the seized drugs exceeds $300 million.

Chief Executive Officer Superintendent Dwayne Lakusta says the size and scale of the project were unparalleled in ALERT's history.

The success of this investigation represents the teamwork of our inter-agency cooperation," said Lakusta. "ALERT has made it a top priority to hold organized crime accountable for poisoning our communities. We have worked aggressively to dismantle the wholesale traffickers and cut off supply lines across the province."

The Project Essence investigation, which began in February, was spurred by tips regarding plans to import a 563 kg shipment of chemical for fentanyl production.

'This particular group was fluid between Calgary and Edmonton and we have the core group, what we believe, at least identified and are still working on identifying potential figures inside the group," explained ALERT Edmonton Inspector Kevin Berge, adding this gang is nameless, as is the case for most gangs that have been active in recent years.

In addition to the fentanyl and chemical seizures, the searches also yielded weapons, cash and proceeds of crime including:

"This is a great day for our province and for our communities, all thanks to the hard work of our incredible law enforcement personnel and ALERT. This drug bust kept more than $300 million of fentanyl off our streets. It alone has saved the lives and futures of countless Albertans. It has kept countless families together and brought down organized criminals who seek to do us harm."

Police have identified suspects in connection with the fentanyl production and charges are pending.